The Roadrunner 23 has been discontinued. If you're looking for something new, check out the best three-season tents for 2020. 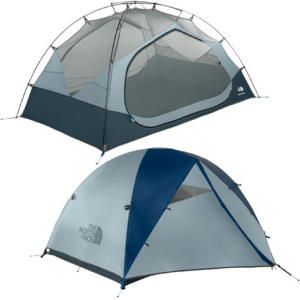 Pro's: Kept me dry in 40mph winds after being set up in the rain for a week. Survived Hurricane Ike as it passed through central Arkansas with 60mph gusts. In the morning we emerged dry to see other tents flat and collapsed all around us. Tough tent all around.

Con's: Ventilation is poor for wet summer camping, it can get pretty muggy inside.

I bought this tent a few years ago and it is a bit different than the current model. I can't remember what year mine is, but I would guess 2004/2005. Specifically, my tent has less mesh and the poles must be fed through sleeves rather than clipped to like the current model. Because of this, my tent is a bit heavier, but functionally about the same.

That being said, I would start off by calling this tent a 3.5 season tent when compared to other "3-season" tents on the market. I've gone backpacking with friends who bought other 3-season tents, and, while a bit lighter and easier to pack than my Roadrunner, their tents lack in strength and rigidity.

Specifically, I was backpacking up in the Italian alps with a buddy. I brought my Roadrunner and he brought his Kelty Teton 2. Everything was going great when a freakish August hail storm came through. My Roadrunner remained watertight and warm while my buddy was perfectly miserable with water seeping through the floor and a totally inadequate rainfly for the wind conditions which hit us. That being said, I did pay twice what he paid and his packed up much tighter/lighter.

Setup also leaves something to be desired. I have to feed the poles through long sleeves which can be a pain, especially when you're in a hurry. But, it looks like they fixed this on the current model with clips.

I now concentrate on fast/light packing and utilze a bivy/tarp setup when going solo. Because of its weight, this tent rarely sees my pack list now unless I'm hiking with my kids or a partner I don't mind sleeping next to. But, if I thought I'd be spending some time up in the mountains and was expecting some harsh weather, I'd definitely take my Roadrunner.

Been under a 36 hours rainstorm, no leak. But onto the roof configuration a flat triangle which leave water accumulation.

Even in cold and humid temperature of the cote nord of Québec this tent is fairly warm.

This is an excellent combination of comfort and weight. To start this tent is easy to set up and has 2 large doors on each side. I found this tent to have exactly the right amount of mesh. Plenty for stargazing and not so much that it doesn't keep cold wind out. The extra crossbar helps a lot to make the tent more roomy. My only problem with this tent is it's more expensive than other tents I think are just as good. (Example the Sierra Designs Lighting).

I have used this tent in the summer on campsites and at the other extreme I have slept on a glacier in it. It is a comfy tent with plenty of room for two people. In the summer it is quite cool thanks to the mesh upper of the inner fly however condensation can be a problem on the outer fly if you have to keep the outer doors closed in the summer. In the winter it is fine for general use and there is plenty of space under the outer fly for your kit to stay dry. I have not had any problems with rain penetrating the outer tent. I can even say I felt very secure sleeping on an alpine glacier with the tent attached to snow stakes (bought seperately) however it was a bit cold and I would take a 4-season tent for this sort of expedition in future.

Took this tent up a few miles of the Lost Coast Trail in Northern California.

PROS: Set up and take down was a breeze! Rolled up, it was extremely compact and lightweight. It comfortably slept two people. During a morning downpour, everything inside stayed bone dry. The big roomy vestibules on each side of the tent covered two large packs, shoes, and other gear with room to spare. The big accessory pockets inside kept all of our gadgets up off of the floor. Color-coded connectors made it easy to set up. Glow in the dark zipper pulls were a nice touch.

CONS: During the rain, I noticed a water dripping off of the guyline points over the vestibules (could easily be fixed w/sealer). The door rolls down onto the floor where it can be stepped on and damaged. A bit pricey.