The Cadion Mid Gore-Tex XCR has been discontinued. If you're looking for something new, check out the best hiking boots for 2022. 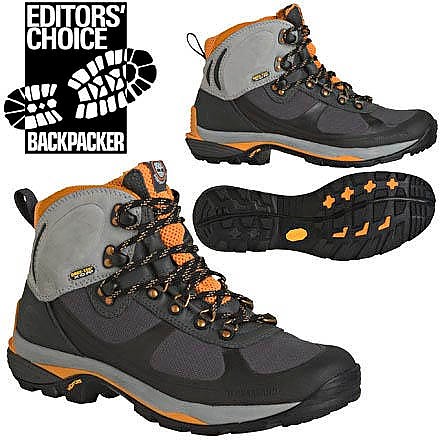 I really wanted to like these boots. Just as described in Backpacker, these boots feel great right out of the box. Unfortunately, Timberland does not make wide widths and the toe box in this boot is simply too narrow for even slightly wider than normal feet. Everything else about them felt great, but after a few 2-3 mile break in walks I knew the width was going to be a problem.

I do think these would work fine for someone with narrow, low-volume feet.

After trekking about 80 km in Himalaya at altitudes 2000-4500m, both boots' soles were broken. If you need something certain and reliable in mountains, never buy these boots. Of course, I got my money back but I couldn't buy new boots in Himalayan mountains.

After reading glowing reviews in Backpacker, I ordered a pair of these boots from a popular camping retailer. The boots arrived with the lower eyelets inconsistently placed relative to the rubber rand. Note that the problem was not the asymmetrical lacing design, it was poor workmanship/quality control. Believing this could be an indicator of less visible flaws, I returned the boots.

The 2nd pair from the same retailer arrived with the same problem, with variation in alignment even between the two pairs. I ordered the 3rd pair from Timberland and received yet another pair with the the same problem. After numerous requests directly to Timberland to have a pair inspected before shipment, I was told that could not be done. I even went so far as to provide photos of two of the pairs showing the issue I was describing. After one last attempt to have Timberalnd address the problem, I was left with no alternative but to return them yet again.

I then ordered a pair of Asolo boots and have been very please with them. The worst part of this whole experience was the company's complete lack of concern that their product was being delivered with such poor workmanship and their lack of willingness to take a simple step to retain a long-time Timberland customer. Not any more.

I was somewhat displeased since I bought these because I wanted an all synthetic boot. Backpacker magazine rated them as the "best fit for women" and listed them as being made of Synthetic Fabric. Nowhere does anyone (not even Timberland on their website) note that the top light gray around your ankles is actually leather...

That being said, these shoes do fit better than anything I have ever owned. These really are perfect for someone with narrow/ low volume feet.