The Catalyst has been discontinued. If you're looking for something new, check out the best approach shoes for 2022. 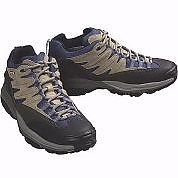 I have both versions of this shoe. The one pictured is somewhat lower and lighter (non-Gore-tex) while the other version not pictured is a bit higher, has Gore-tex and has a somewhat thicker sole.

I like both very much and hike a lot in them. Their best feature is the stealth rubber sole which gives terrific traction and stickiness. People in our hiking group tended to use Montrails before we got into these and whenever it was wet they fell. You could predict who would fall by their shoes. No one falls in these though they are so sticky you can accidentally hit a rock and have it stick a bit when you don't expect it.

Other than that they are good all around shoes. Not fantastically comfortable or cushy--I added new insoles which helped a lot--but I also never get blisters or other injuries from them. And unlike Five Tennies, which also have stealth rubber soles, these hold together.

Did I say Five Tennies fall apart--delaminate--and the company refuses to do much about it? Sorry, I liked them once, but after several pairs fell apart and the company failed to respond I'm no longer pleased. Vasques are infinitely better that way.

Materials: Gore-tex and non-Gore-tex
Use: fast dayhikes, sometimes with rough trails
Break-in Period: Not necessary
Weight: Not sure--not all that heavy
Price Paid: $82

Good tough all rounder, very comfortable and the lace to the toe will make sure you are secured in it.

I have the cheaper non-Gore-Tex ones, so they are not waterproof at all, but they don't pretend to be. So stick on dry land with these, even in the rain you will get wet feet.