The Pingora has been discontinued. If you're looking for something new, check out the best approach shoes for 2022. 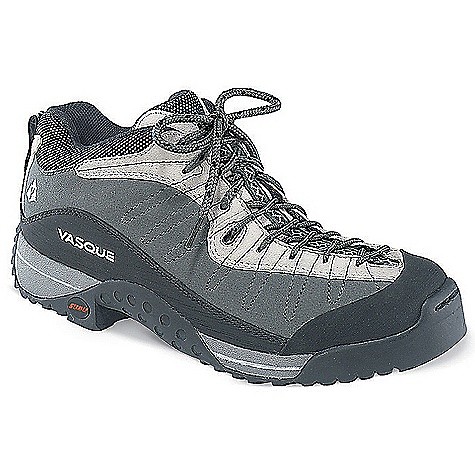 The Vasque Pingoras were designed as technical approach shoes, and as that they work great. They are very supportive, stable and protective, definitely more so than than many mid-top light hiking boots, not to mention trail runners. The overall tread pattern is fairly flat, designed for grip on rock with a minimum of tread squirm. Also, this enables the Pingoras to smear fairly well for something that isn't a climbing shoe, which is likely a function of the always excellent Stealth tread compound (a variation of climbing shoe rubber). In addition, there is a well-defined inside edging platform on the forefoot that works decently (which is somewhat shocking since I sized these shoes like a light hiker, not a climbing shoe) if you cinch down the forefoot with the to-the-toes lacing. The existence of a real heel (or rather, the gap before the heel) is also very helpful when you're rock-hopping on sharp-topped rocks, as the gap before the heel hooks onto a rock angle and allows you greater freedom to maneuver (assuming one has the foot stability/strength to not wreck one's ankle, hehe).

Downsides? They're too heavy to work as true trail runners, but they do run in a pinch. They're not the smoothest runners around, but they certainly are stable. The flat-ish tread pattern is not well-suited for loose dirt, nor loose-dirt-on-rock. The lack of any mesh makes the shoes less breathable than it could be, and slower to dry. OTOH, the lack of mesh is possibly a reason for the shoes' stability, and the synthetic material dries much faster than leather. Finally, the ankle pad material is not as bomber as the rest of the shoe. On mine, the inside is all chewed up, presumably from shoe-to-shoe abrasion. That said, it does not affect functionality.

I would buy another pair after these wear out, especially considering how cheap they can be found. They're great at MSRP, a steal otherwise... assuming your intended usage matches what they're good for.

I've owned a bunch of approach shoes over the years from a number of companies, but these have become my favorites. FiveTen stealth rubber is the best. And these have it. I've always had problems with FiveTen shoes both in terms of fit and quality. My Pingoras fit me perfectly, and they are built to last.

They are a bit beefier than some approach shoes. These are geared more towards hiking and climbing than trail running. You wouldn't really want to try to do any real running in these. But they climb really well for a sneaker, and they hold up well on long hikes with a pack full of climbing hardware. They have full leather uppers and do not breathe as well as some nylon mesh shoes, but these will hold up much longer and they protect your feet a lot better.