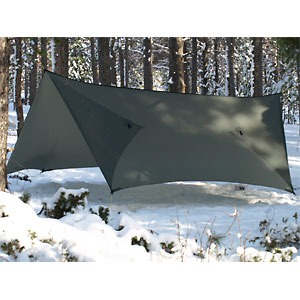 The Superfly Tarp is a 132" x 120" 'four season' tarp. A four season tarp is a tarp with doors so that the tarp can be completely closed off on all sides.

At the time of this purchase I only had limited funds and so I wanted to just buy a tarp that would suffice for year round use. I have had the Superfly for about a year and a half and I could not be happier. From summer to winter this tarp has kept me dry and comfortable in some really severe weather.

This tarp is olive brown in color and is made of a high quality silnylon. This, along with all Warbonnet products are made in the USA. The Superfly is very well made with excellent craftsmanship.

The super fly has an attachment point at both ends of the ridgeline, one at each corner, one on each door, and two pullouts (optional) per side. The Superfly is reinforced along the ridgeline with a grosgrain ribbon.

Overall impression of materials and craftsmanship is superb.

The Superfly is designed as a caternary-cut edges elongated hex tarp. This tarp is intended to be primarily pitched in an A-frame style pitch. I have not experimented too much with different styles of pitching and have always used the A frame or a modified A frame pitch.

During fair to moderate weather my favorite pitch is an A frame in porch mode, which is where one side is elevated to provide a 'porch' style overhang. During foul or windy weather I will pitch in a traditional steep A frame and deploy the doors to seal off the ends of the tarp. With the tarp pitched in an A frame using all tie outs and with the doors closed a very storm worthy shelter is at your disposal.

I have been through one very strong snow storm and quite a few strong thunderstorms, and many other smaller snow/rain/sleet storms in the Superfly and have always remained warm and dry.

I have spent some odd 100+ nights under this tarp, many of which where I encountered rainy or otherwise foul weather. Five storms in particular really come to mind and I will briefly discuss all of these below.

Pitching the Superfly in 'porch' mode provides me with a virtual palace of room. As long as the wind isn't really blowing porch mode is my standard setup. Even in winds pitching the porch side away from the wind is usually a valid option during 'normal' storms. Even with the tent pitched in  a true A frame there is still ample room to move around inside the tarp area without feeling claustrophobic etc. I easily have more room with this tarp then I ever did with any of my tents.

Storm 1: Late Summer of 2010 I was camped in the Tunxis State Forest of CT and experienced a very strong thunderstorm where about 6 inches of rain fell in a few hour period. Roaring brook that I was camped near went from a literal trickle to a 8+ foot deep ROARING brook. The winds were probably around 20mph sustained with gusts maybe up to 40 or so. Please note that this was the first time I had ever used the tarp in any rain.

Due to significant surrounding tree cover I decided to try my new tarp in porch mode, with the porch side facing away from the wind and utilizing all other tarp tie outs. I quickly set up my tarp, being my first time it took me about 10 minutes to play with it and get it just right. After my tarp was up I strung up my hammock underneath and took a seat in it and watched the storm come on through. It rained cats and dogs, I mean a real torrential downpour for the next several hours.

I had read about a common disadvantage of silnylon where during very heavy rains that silnylon can 'mist' through, where a very very fine mist will occasionally come through the material. Well, this indeed happen but I was not even concerned by it as it was very minor.

The Superfly performed superbly during this storm and I could not have asked for better protection (or a more comfortable place to wait out the storm). While the storm raged outside I had plenty of room to cook and lounge around in my hammock, and had room for my friend to wait out the storm under my tarp as well. He was waiting it out in his 1 man tent but quickly ran under my tarp.

Storm 2: Mid fall 2010, I was once again camped in Tunxis State Forest, at the summit of Pine Mtn. A fairly windy snowy, sleety, rain aka nasty wintery mix was rolling through. I had the Superfly pitched A frame with the doors closed.

Storm 3: Late winter, early 2011. I was camped at Sages Ravine in CT on the AT and during the afternoon to early morning we recieved roughly 16 inches of snow. Once again I had the Superfly pitched A frame with doors closed and it performed flawlessly. I woke up 2 or 3 times during the night and slapped the tarp so that it would shed the snow, but otherwise was perfect.

There was probably about 4-5 inches on it at any given time and it seemed to support it well with no enexpected sagging etc. With the side pull outs in use the tarp really only sagged a few inches under the snow load.

Storm 4: Mid summer, 2011. Not really a strong storm per say, but a persistant one. I set up camp in the Tunxis SF at Roaring Brook early morning and was planning a relaxing day and evening at camp before a long hike the next day. It rained constantly and steadily the entire day and night with period of moderate to heavy rain.

I had the Superfly rigged porch mode on one side, and the other side quite high/wide as well. The wind was not really blowing the rain around so this worked out well and allowed a large area for my friend and I, and our two dogs to lounge around out of the rain. I left the doors hanging down loose, so they helped to stop the occassional spray from a wind gust.

Storm 5: Late October, 2011. My backyard in NW CT. I wanted to test out my tarp in another snow storm and boy was it a test! We recieved 18 inches of heavy wet snow. The Superfly was pitched in a very steep a frame with doors closed. I had to slap the tarp every hour or so to keep the snow off, but other than that she held up beautifully.

The snow was very heavy so an inch or so of it was enough to make the tarp really sag as the wet snow really clung to everything. I was easily able to slap the tarp sides from inside the hammock, one quick slap to each side was all it took and all of the accumulated snow would slide right off.

Those are just a few of the most memorable storms I have been through in it thus far. I have encountered mainly more nights of rain, both light, moderate, and heavy and every time it performed flawlessly.

I would highly recommend this tarp.

I see the price has gone up since 2011. I paid $140 from their webby. It's a good tarp except for one thing.  Umm it leaked first time I used it in ADK (that's kinda the point of it is to stay dry) from the stitching for the pullouts just below the ridgeline.

So I emailed. Brandon responded right away. A for customer service. He told me to put some sylicone on the stitching. (WHAT? Not a mistake which would have been acceptable...but they know?) Again...Umm  at $140 I assume your stitching comes treated. IT'S A RAIN TARP!

So I had to go to WalfreakinMart to buy $10 worth of seam repair??  WEAK!! C'mon guys !! Expect better from CO peeps. I know you guys don't get much rain out there. Come to East so we can show ya!

TREAT YOUR SEAMS WITH SEALANT.....BEFORE...YOU SELL YOUR PRODUCTS TO US THAT ARE MADE TO KEEP US DRY!! DUH!

Otherwise drop your prices to reflect the craftsmanship. Sorry, but if you want to play with the big dogs bring your big boy pants.

In their defense it does state that the pull outs need sram sealing. Most all the tarps on the market need seam sealing. 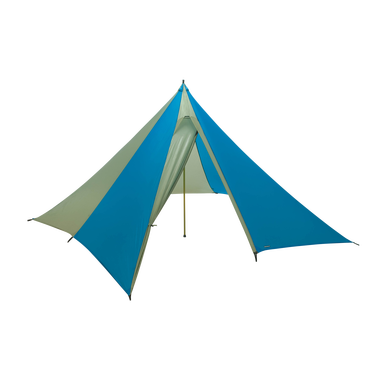 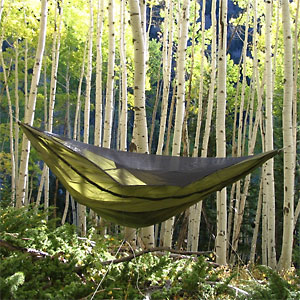