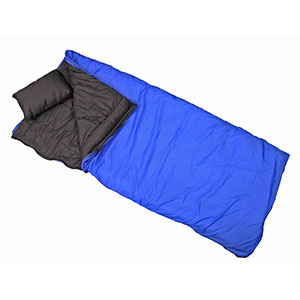 I have two styles of Wiggy's sleeping bags. Two rectangle…

First, let me say what attracted me to buy the bags was that they are made in the USA. And the bags are made very well.

But I have been camping with my wife in 36 degrees and raining with the rectangle 0 degree bags zipped together and froze my butt off. When I talked to Wiggy about it he said that the bags were probably too big to keep us warm in that kind of weather.

My sons have been on a 50-mile hike in the Sierras with the +20 degree bags and they said they were plenty warm. So I would suggest if you sleep cold buy the next coldest bag that you think you would be comfortable with. If you are going to be in 20-30 degree you might want a 0° or colder bag.

I went turkey hunting and it got down to 32 degrees and I put the +20 degree mummy style in the 0 degree rectangle bag and was very comfortable. But that was me and I sleep cold.

Just got off the phone with Jerry with a problem with…

Just got off the phone with Jerry with a problem with a 0-degree bag not keeping me warm in 35-degree weather,  So asked what he suggested, to my surprise no help with possibility of a problem with the bag. His fix was buy fishnet long underwear for 80 dollars. Too funny!

OK, I will use this bag for my dog to sleep on and go buy a good bag.

I briefly checked the website and the lightest "ultralight" bag they had was a 2.5 lbs beast rated for +35 degrees! My down bag rated to 20 degrees weighs less than that and I have slept down to 19 degrees while staying warm. I would steer clear of this brand.

Welcome to Trailspace, Ken. Sorry to hear about your bad experience with this brand.

Welcome to Trailspace, Ken. I hope you're able to find a better sleeping bag that works for you: https://www.trailspace.com/gear/sleeping-bags/

Military style robustness, but not up to its temperature…

Military style robustness, but not up to its temperature rating.

I had the flexible temperature range sleeping system: i.e. two bags that are made to fit into each other (the outer bag has an additional zipper to mate with the zip of the inner bag).

The idea of a sleeping system was the reason I bought the bags. The inner bag was supposed to be warm down to -15°C or so: i froze my ass of around 0°C. The combination of both is rated -40°C (=-40°F). I quit a trip in -15°C, because it wouldn't retain enough warmth to sleep in .

I measued the loft and found it had diminished. Mr Wiggutow told me to wash and dry the bag and report the loft. I did as he said, but the result wasn't convincing, so I sent the bag to their service.

Their customer service told me, that the bags were well maintained. My question why it failed and why the everlasting loft apparently disapeared, was never answered.

I have used down bags since then — on hiking/ skiing trips and on sea kayak trips throughout the year (e.g. arctic Norway in winter). Storing the down bags in an ultrasil drybag works perfectly for me, of course I'm using a tent.

I gave the "sleeping system" away to a homeless guy freezing under a blanket. From time to time I see him in town, he seems to use the bag.

The idea of the sleeping system is great. Usually the winter bag is the most expensive and the least used. If you can replace it by a combination of a summer and a moderate winter bag you gain in packability (two minor bags are more easily stored than a barrel of a winter bag), versatility, and price. The combination certainly weighs more than a single winter-bag.

Compared to North Face Polarguard bags, the Wiggy bags seem to be a little more bulky, losing bulk as they lose loft.

General usability is about the same as with any of the more known outdoor brands, no surprises here.

Paying custom and transport to Europe these bags where on the expensive side... and considered their one year of usage I had, which was a failure in addition, I would not recommend to anyone to buy these bags.

Funny that a manufacturer who sells the "Finest Outdoor Gear in the World" also has a 1976 Mercedes Benz listed on their site. I read low reviews on the Wiggy's gear due to weight and warmth.

Compared to regular issue army-stuff, they are probably great - at least from what I have seen at some army retail stores. The standard sleeping bags of my youth were the TNF Cats Meow, Snow Shoe and Big Foot - at that time I thought they were great bags. Today, having a litle more money at hand, I would go for down any time. The highly desirable capability of a sleeping bag to retain warmth when wet is something I just never needed: I know that I have to keep my down jacket and my down bag dry and I'm not in the situation that I have to sleep in the ditches with someone arround trying to shot me. That gives me some freedom to care for my equippment even while I'm using it.