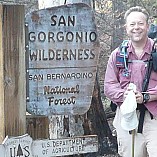 Affiliations: I have no affiliation with any stove manufacturer or retailer. I've got no dog in that fight, so to speak. Neither do I have a devotion to any particular class or type of stove. I am a stove agnostic, agnostic in the sense that I think all stove types have their place and time. I use wood, ESBIT, kerosene, alcohol, white gas, and canister gas as I see fit or the conditions demand. I do make a small amount of money on my blog due to advertising, typically something like a $1.00 (USD) per day, but sometimes I receive more if I post more frequently. Lately (December 2014) it's been maybe $1.50 per day. That money goes toward paying my fuel and hosting costs. After fuel and hosting costs are covered, there might be some money left over, but it's not much. I pay for the food used in the tests usually out of my own pocket. I pay for the gasoline to drive to hiking locations. The blog just doesn't bring in very much. I am a Trail Ambassador for Gossamer Gear for which I receive no remuneration. I have received some complimentary Gossamer Gear equipment, namely one Mariposa backpack and one Headsweats visor. I like Gossamer Gear, and I'll probably say so. That's why I became a Trail Ambassador. I will not however push Gossamer Gear on people or try to unduly influence them. HJ

In the interests of full disclosure:  I have in the past occasionally written articles about stoves for Seattle Backpackers Magazine.  This was an unpaid relationship, but since the rules state that we should disclose any relationship with the outdoors industry, I mention that here.