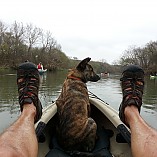 Eagle Scout who took way too much time off from the great outdoors growing a career and raising a family.  Don't get me wrong we did our share of car camping and short day hikes, but with my son entering his teen years and daughter close behind it's time to take it up a couple notches.

Over this past year (2013) I've hit it hard, getting in what I could as a way to ramp up for bigger adventures.  When my son opted out of Scouts for Civil Air Patrol, I got involved with MeetUp.com as a way to continue getting outside with other like-minded folks.

We also brought home Max from the Humane Society in May 2013 and he's been my constant outdoor companion ever since, going outdoors with me everywhere.  One of my goals is to stick to adventures where Max is able to come along as well.  National Parks are unfortunately an exception.

My other outdoor buddy is my son.  Sure I'm prejudice but what an awesome young man he's becoming.  Tall (just cracked 6') and strong and enjoys going out for hikes, camping, backpacking, and kayaking with Max and I; he's a real pleasure to have along.  When I'm just out for a hike with a MeetUp group he doesn't always come along, but he's out with me at least once a month sometimes more often.

Some of the activities we've ramped up to over the past year include:

My basic goal is to get outdoor often, and to take my game to the next level in all categories.  I'm not looking to be extreme and whatever I do I intend to be able to have my son and Max accompany me.