Karnazes to Run Five Major Deserts in One Year 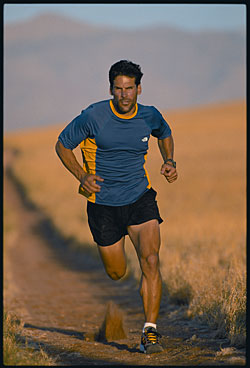 In pursuit of the Desert Grand Slam, Karnazes, who is currently running the Atacama Desert in Chile (March 30 – April 7), will also run the Gobi Desert in China (June 6 –16), Death Valley in California (July 14 –16), the Sahara Desert in Africa (Oct 24 – Nov 3), and the desolate, arid plateaus of Antarctica (Nov 19 – Dec 5). Races range in format and distance from seven-day, 155-mile runs that require competitors to carry all their own supplies, to a crew-supported traverse of Death Valley in a nonstop, 135-mile push.

As he races across the four deserts of Atacama, Gobi, Sahara and Antarctica, Karnazes is taking part in “4 Deserts,” presented by Racing The Planet, a formal running series that encourages athletes to go beyond their athletic frontiers and explore the limits. The Death Valley crossing consists of Karnazes’ seventh running of the Badwater Ultramarathon (he has completed the race six times, winning it in 2004). “The Badwater Ultramarathon is one of my favorite races, and Death Valley will always be one of the ultimate testing grounds on earth,” says Karnazes.

“The opportunity to run five of the world’s greatest deserts in one year is an incredible experience," says Karnazes.

The Atacama Crossing (Chile) 2008 began Sunday, March 30th, with competitors representing 21 countries. Three competitors will be attempting to be the first to complete the “4 Deserts” in one calendar year: Paul H. Liebenberg, from South Africa, Jimmi Olsen, from Denmark, and Karnazes. "The epic scope of these runs and having three of us vying to do four in one calendar year adds an element of both competition and global camaraderie,” says Karnazes. “I’m honored and humbled to be a part of it.”

The Atacama course began on the edge of San Bartolo at an altitude slightly more than 10,000 feet following an old road that features ancient rock carvings dating back 1000 years. Competitors will pass ancient Incan ruins, narrow slot canyons, and the dreaded salt flats before ending up in the spectacular setting of Valle de la Muerte. The finish will take place in the Town Square of San Pedro de Atacama and the mayor will be present to hand out medals to those determined and fit enough to finish all six stages.

Each of Karnazes’ five desert runs will include its own unique challenges in what Karnazes describes as a “true test of endurance and human spirit.” Temperatures in the Gobi Desert can range from 40C to –20C. Chile’s Atacama Desert is widely agreed to be the driest place on the planet, receiving an average of only 1mm of rain per year. The Death Valley crossing, which covers a wide stretch of the Mojave Desert, begins at 280 feet below sea level, crosses two major mountain passes, and ends at Mount Whitney Portals, 8,360 feet above sea level. Temperatures will likely hover in the 120-degree range during the event.

In 2006 Karnazes completed The North Face Endurance 50, in which he ran 50 marathons in 50 states in 50 consecutive days. He is the author of the bestseller “Ultramarathon Man: Confessions of an All Night Runner,” and the soon to be released (August 18th) “50/50: Secrets I Learned Running 50 Marathons in 50 Days-and How You Too Can Achieve Super Endurance.”

In an effort to raise global awareness for safe drinking water, The North Face and Dean Karnazes have teamed up with Blue Planet Run Foundation, a non-profit 501(c)3 organization dedicated to raising global awareness about the lack of safe drinking water, and funding working solutions today for the billion plus people living without ready access to this life sustaining resource. For more information, please visit, www.blueplanetrun.org.

Good luck Dean! I, too am seeking a new adventure, tune into whereskarl.com for info on the Appalachian Trail Assault record attempt