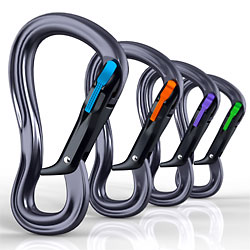 Magnetron GridLock
Forget twistlocks and screwlocks. Black Diamond's newest carabiners for 2012 use magnets to auto lock.
Throughout the decades, Black Diamond has been at the forefront of revolutionary carabiner design—from Yvon Chouinard’s original ovals; to the climbing world’s first-ever wiregate, the HotWire; to the crossload-eliminating belay carabiner, the GridLock.
The company's next carabiner design innovation? Magnetron Technology.

What’s so special about Magnetron Technology? One word: magnets. Yes, that’s right—locking carabiners that utilize magnets and not twistlocks or screwlocks on the gates. 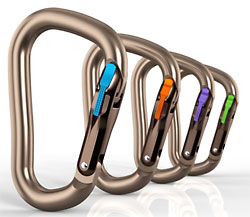 For an in-depth look at the concept and development of Magnetron Technology, watch the Black Diamond video below.

Magnetron GridLock and the Magnetron RockLock will be in stores by July 2012.

That's amazing.  Must be rare-earth magnets.  I couldn't imagine you'd want to get a credit card or an iphone within a foot of those.

Solution in search of a problem? Do I say that too often?

Just when carabiners were dropping in price again, now we have a way to make them more expensive.

Okay, I admit it is cool and may save some falls, but my initial reaction is that I will continue to use screwgates. Maybe just because they are cheap.

maybe just trying tooooo hard.  It will be interesting to read some users reviews

That's amazing.  Must be rare-earth magnets.  I couldn't imagine you'd want to get a credit card or an iphone within a foot of those.

Earth magnets are used on my Hydraform bladder to attach it to my sternum strap. Pretty strong stuff. Will definitely make a compass go bonkers if held to close.

I will be curious to see how they perform over time. Two more hinged parts provide two more potential points of failure, but screw gates can become severely bound in a variety of ways. These wouldn't have that problem.

I have them ... a "dent-ball set" (for removing dents from the bells of horns).

Also, they are replacing ceramic and ferrous metal magnets on the backs of speakers.   A HUGE difference in weight.   I used to be a guitar-player in rock bands.   Still have a couple of those "Kustom" amplifiers (the ones with the colored, sparkly, rolled-and-pleated "Naugahyde"), that have three 15" speakers in each ... are the size of refrigerators ... and weigh A TON.

The magnets are incredibly powerful.   Printed "WARNING !" labels are on the dent-ball tools.   Warns those with heart pace-makers to refrain from using them.  I know of fellow band instrument repair-techs that have had their  fingers smashed by these things ... caught unawares of the amazing strength and speed when they draw onto another metal substance.  Has happened to me; fortunately, with a small one.   Also, will screw-up a wrist-watch ... and computer chips.

Scroll-down in the wiki site, for the "Hazards" description.   Deaths have occurred.   Many broken bones, also.

I'm sure these are going to be a big hit with new climbers.