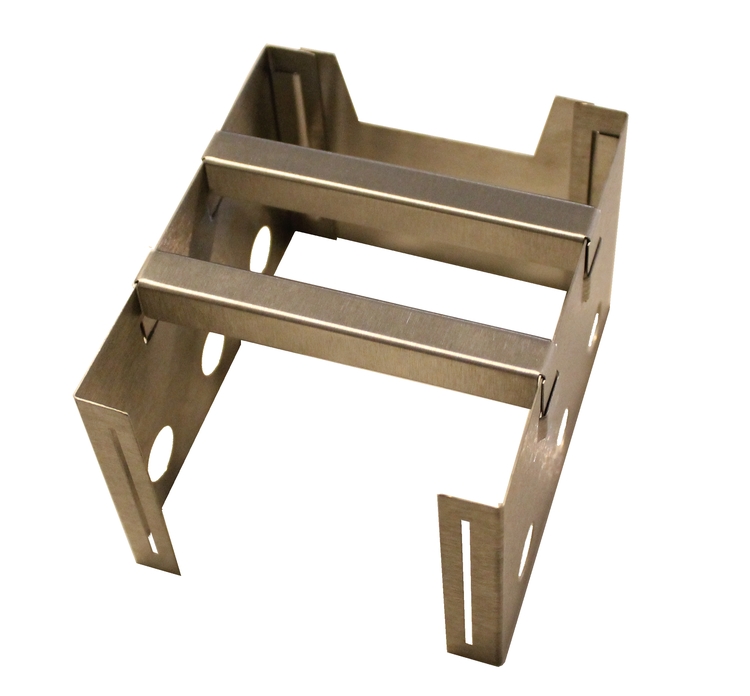 Ever wish stove fuel grew on trees? With the 180 Tack wood-burning stove, your wish may come true. This squat, light stove has a small firebox, topped with a simple grill. Underneath, an optional ash pan rests to catch any embers and ashes.

Very Light and compact backpacking stove that eliminates the need to buy and carry fuels. The 180 Stove weighs the same as a micro stove and one small fuel canister. Never worry about fuel again. Cook with twigs, grass, leaves, etc. Stainless steel and folds into very compact case that keeps the smoky parts on the inside. Very cool!

I have been using a 180 STOVE for more than two years now and find it liberating. This is a compact, light-weight cook stove with a stable, generous 6”x7” cooking surface. It only uses a handful of twigs to cook dinner. I don’t have to sweat how much fuel to buy and store or carry. The stove packs down to a 3”x 6”x 5/8”self-forming case, too, that keeps smoky parts away from my gear.

It is as light as the tiny micro stoves with a single fuel canister but far more dependable. Likewise, I have done several field tests with the 180-VL. This triangle-shaped stove is a little smaller than my 180 Stove, but it would still support a large pot. I find that I have to refuel the 180-VL more often than the 180 Stove due to the smaller firebox, but it is lighter and costs about 30% less. Both stoves solve the problem of boiling water and cooking quick meals without electricity, gas, or other expensive fuels.

Neither stove has hinges, rivets, screws, valves, or welds that could fail. They are designed to last and are made in America. They create a dependable, simple, and sustainable way to cook.

To be fair, cooking with twigs is not a push-button fire. But it only takes a little common sense to get a hot fire that rivals any toxic-gas stove. After all, the cooking is done with the tiny twigs one might use as kindling for a larger fire. Even on the rainy days, I find dry twigs sheltered under trees. I have used the stoves in the rain, in the snow, and in fair weather, of course. They have not let me down yet.

I went camping with some buddies this spring and due to lack of time and close fishing, we went to a campground. The provided fire grate looked handy, but ten large chunks of firewood and 30 minutes later, I abandoned the grate for my trusty 180 STOVE. A few twigs were all it took and I had my food cooked and several cups of tea down.

The stoves from 180 Tack keep the flames close to the pan, and the stainless steel reflects the heat right where it is needed. The big fire grate could not compete. The fire grate used 8 or 9 large sticks of wood, and still did not do the trick. I splintered a few twigs from one of the large sticks and cooked my entire breakfast on the 180 STOVE. It uses a tiny fraction of the fuel needed for a camp fire.

There are a couple of minor drawbacks to these stoves. For one, since you have to tend the fire, cooking something that takes hours, like a pot of beans, would not be practical. And the pot does get smoked up a bit. The stoves pack the smoky parts on the inside, so that is not much of a bother. And I am willing to wash the smoke off my pans to eliminate the need to buy, store, and carry liquid fuels.

Another thing I like about these stoves is that I know I am cooking naturally; the way people did for thousands of years before our modern conveniences were dreamed up. I like working with nature rather than hiding from it. I like leaving the fuel behind. My fuel does not depend on oil wells, tanker ships, trucks, refineries, more trucks, packaging, electricity, or canisters.

When I cook, I push a little soil to the side first. Then when done cooking, I cover the ashes. There is very little ash anyway, but once covered, there is no sign I cooked there. I also use an optional ash pan for cooking on snow. Whether you opt for the 180 STOVE with the larger firebox or the 180-VL, either stove makes a sensible and dependable addition to a bug-out bag or a camping backpack.

The 6"x 7" cook surface, built in wind screening and…

The 6"x 7" cook surface, built in wind screening and compact form factor when folded down are this stove's best attributes.

I bought the 180 STOVE stove last fall and am quite pleased with it. I opted for the ash pan accessory to go along with it as I plan on doing some winter camping this season and will need the support it provides in the snow. I have owned a few stick burning stoves over the years and they all have their pluses and minuses.

This stove has a very large cook surface and generous firebox that can handle all sorts of combustibles. I can get my water boiling in a few minutes if I am in a hurry or because of the large fire box, I can create a slow burn and develop a decent bed of coals if I want. I truly enjoy using fuels that I can find around my camp site, but the drawback is that it can be a bit messy. I've found that if I just carry a cloth and wipe the parts down before I put it away, I can control the mess easily enough.

This stove is not as light as my gas burning stove by itself, but since I am not taking one or two canisters with me, I make out better.

I would definitely recommend the stove. In fact, I'm even thinking of picking up the smaller 180-VL to give it a go. If I do, I'll post a review on that one as well.