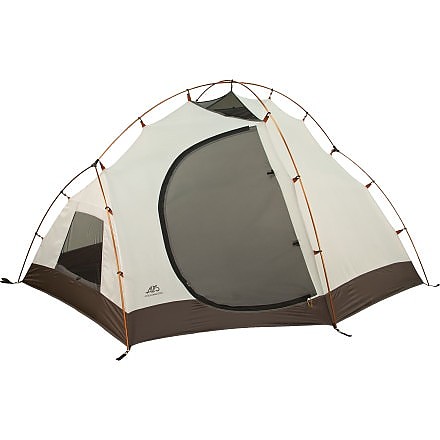 A relatively lightweight, easy to set up tent with adequate room for two. The rain fly provides excellent protection, and a small and a large vestibule. The tent itself is very well ventilated, with two large screen doors, screen windows at each end, and two small triangular screened peak vents, all with zippered flaps to seal them up.

This is the first lightweight tent I've owned, and I'm very happy with it. It sets up easily, has plenty of room inside (I've only used it solo), keeps the bugs out in the summer, and ventilates very well even with the rain fly attached.

I haven't used it during any downpours, but during rain showers there were no leaks. There's a detachable gear loft about 1 foot square that's perfect for glasses or a flashlight, and a loop at the peak for hanging a light.

So far I've only used it for car camping — I'd pack my gear up in the Jeep, head out into the woods, and after a day of exploring I'd set up the tent before nightfall. Last night — literally, it was already dark when I got home from work — I decided to head out for an overnighter in a small clearing about a 10 minute walk from my apartment and set it up in the dark. I packed very little, just the tent, my lightest sleeping bag (expected lows in the mid 40s), my Therm-A-Rest Trail Pro, and my Black Diamond Orbit lantern. Plus my iPhone for pics and reading before bed.

What you get when you open the bag:

The pitching instructions are printed on a piece of waterproof paper attached to the mouth of the carrying bag. Instead of pole sleeves on the outside of the tent there are plastic clips, and these make connecting the poles very easy. The poles pretty much assemble themselves, all you have to do is give the sections room to swing.

The 3-way hubs at each end of the main pole have an "up" side, it's stamped in the aluminum, but an easy way to tell at night is the "open" side goes down. The tent will assemble with the hubs facing the wrong way, but water can get in them and run through the poles. The rain fly has velcro to attach it to the poles, I rarely bother with it but in high winds it would help keep the fly from tearing.

The tent went together very easily in the dark, and I mean DARK — it was cloudy with showers forecast (which was right for once) — but with no light at all I managed to get the tent up in about 1/2 hour by myself. When I got up this morning I saw that it actually looked pretty good, with no excessive slack anywhere (one of my pet peeves left over from the army — tents have to be TIGHT!) Again, there were no leaks during the passing rain showers, but when I unzipped the vestibule door some water on the fly dripped into the tent.

This winter I plan to use it more often on overnight or weekend snowshoeing trips, so I'll see how it does with cold weather and snow and update my review.

Its cons aren't really that big a deal. I've never seen a tent that came with good stakes, and this one is no different. They're really not much more rigid than twigs, so after the first few uses I ordered a dozen MSR Groundhog stakes and solved that problem permanently. I ordered a footprint for the tent from amazon. I'd gladly pay the extra cost up front instead of having to waste my time buying necessities (IMO) like these separately.

The tent comes with swatches of fabric for repairs, but no adhesive (which I assume is the way repairs are made with nylon tents.) I'll have to find some before the winter.

With only two guy points I'm not sure I'd call this a true 4-season tent, but it seems like it's plenty adequate for anything below the treeline. If you don't use the rain fly it's free-standing, but the fly requires two stakes for each vestibule.

The weight is a bit much for one person to carry, but that one person is getting a lot of room. It beats a 1-person bivy shelter because you can do more than just lie down.

After feeling around for the door zipper, I'd like to see glow-in-the-dark zipper pulls for the screen doors and privacy panels. I'm sure they're easy to find online and retrofit.

Apparently the tent is no longer available in stores, but if you're looking for a 4-season tent and find a used one in good shape for a good price I'd recommend picking it up.

Set up in my backyard after buying it. 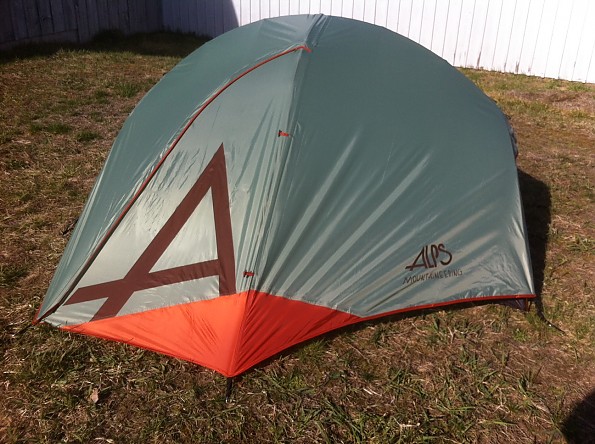 Taken while drying things out, to show the tent and pole configuration. 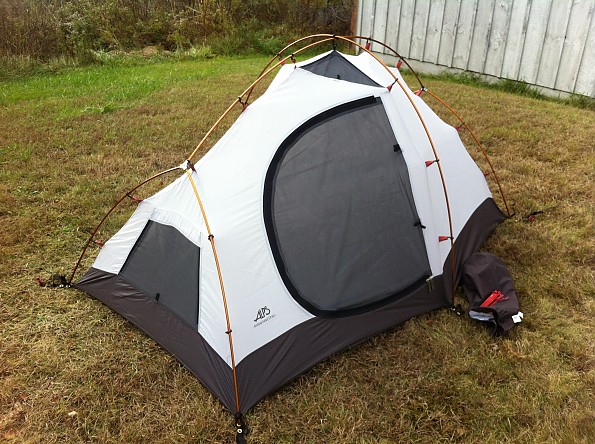 I've actually been sleeping out in the tent for over a week now, giving it and one of my new sleeping bags (ALPS Mountaineering Crescent Lake +20) a sort of long-term test. I really, really like the tent! Condensation was never an issue because I slept with the rain fly doors open, and only the screens in all the tent doors, windows, and vents.

We're right in the middle of an ocean storm now, with rain, snow, and winds gusting to 45MPH forecast, so last night I closed the rain fly doors but left everything else open. I also guyed out the rain fly (two points above the windows) for an extra measure of security in high winds. When I went out to the tent around 2130 last night, there wasn't a drop of water inside that hadn't dripped off my rain jacket I was wearing. It was very gusty and the rain was coming down moderately hard, but the fly wasn't flapping and even with only the screens in place there was no wind inside the tent.

When my alarm went off at 0345 (I had to work today) the inside of the tent had no moisture to speak of. The same went for the exterior of my sleeping bag. Tonight it's supposed to drop into the mid 20s, so I'll close the doors and windows and see if just the roof vents are enough to ventilate.

After tonight, I think I'll take down the tent and start sleeping in my bed again. I have cats that are probably wondering where the heck I disappear to and resent the fact that I don't let THEM go outside at night. Next update: COLD weather, and snowfall.

Well, I said I wanted to test the tent out in cold weather, and mother nature obliged me this week — Monday night dropped to around 0°F, and Wednesday night the temp was around -12°-15° below zero. Perfect!

I have a new -20°F sleeping bag I wanted to test, so Monday afternoon I set up the tent in the backyard. That night I only had the outer fly vents and the two roof vents open, and the tent walls were coated with frost. Last night I also opened the two windows at the ends of the tent, and in both cases the bottom of the rain fly was 3 inches or so off the ground. There was about the same amount of frost on the inside walls of the tent. Not having slept in a small nylon tent within recent memory I don't know if the amount of frost was excessive, but I'm inclined to think there's only so much one can do when one has to breathe and it's 0°F or below overnight.

There was a bit of a snow shower inside the tent as I moved around while getting out of the tent to go inside and get ready for work. With a closed sleeping bag I don't think it would be any problem. Maybe I'm just a little too much of a bull in a china shop when getting out of a tent.