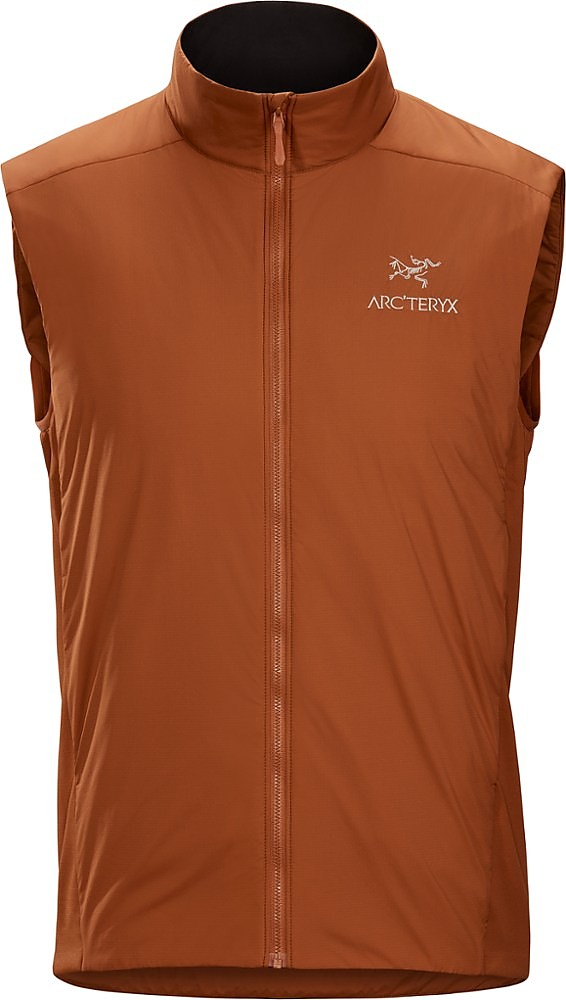 Great extra bit of core insulation for over your base layer or under your main puffy.

I often run really warm while I'm moving, but cool down very fast when I'm done for the day. I often bring only a very thin base layer and windshirt, even when quite cold, and then use a thicker than expected down jacket for when I'm done. I often think of bringing a fleece so I have something for on the move, or for when it gets extra cold to wear with my puffy, but because of bulk and weight I often don't.

Last couple of climbs I have left both the fleece and down jacket at home. Instead I opted to only bring a very thin base layer, an Atom LT vest, and Atom LT Hoody. I would only use the hoody on the move when below -20˚C, but the vest gives me good core warmth in less cold temperatures would it be necessary. In that sense it takes over the role of my bulky fleece.

During longer rests, or at the end of the day, the Atom LT hoody by itself is often a bit cold for me. I always feel I want to bring just a bit more to be sure. This vest is just that bit more.

The vest and hoody layer over each other perfectly fine, and this combination is actually easier to put on/off than taking off the Atom LT, putting on your fleece, and putting on the hoody again. I also like that the vest has its own windproof fabric already, and that it weighs less than most of my fleeces. My medium weighs 225gr. 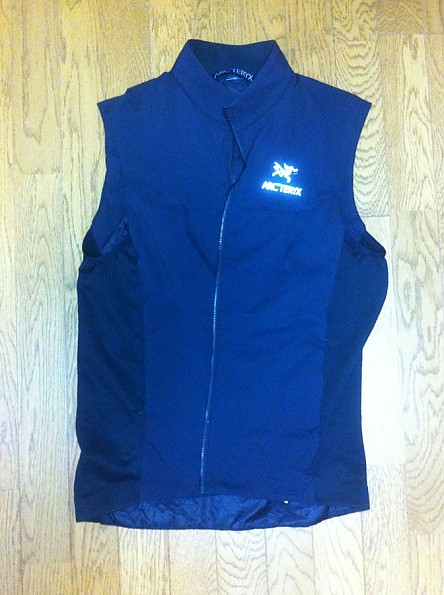 The vest fits like the hoody. If you have a medium in one, I would get a medium in the other. It is fitting but not tight. Because of the power stretch panels on the sides there is some stretch while moving. The back hem is a bit lower so your back is not as quickly exposed when bending over. You can layer either the hoody over the vest, or the vest over the hoody - both fits easily.

The vest is very well constructed. Perfect stitching and finish, and like the other Atom LT garments the outer shell fabric is very pleasing to the touch. It doesn't stick so much to your skin, and doesn't give you that static charge when putting it on/off. There is no hem cord adjustment, but the fit is good. There are two side hand pockets, and a quite spacious inside pocket. The inside of the neck is a fleece like surface. The front has a reflective logo that might help you to get noticed in traffic lights.

The zipper is like the other Arc'teryx Atom zippers, non-locking. It can open up on you. This is so you can open it with one hand, which I actually love.

On a recent scramble up a 3000+m / 10.000+ft peak, I knew it was going to be cold up top and that we were going to spend some time there (to watch the sunrise). I was wearing both the Atom LT vest and hoody under my hard shell. When scrambling up I was naturally warming up inside. I opened up the pit zips and the top of the main zipper of my shell, and holding on to some rock could just open up both zippers on my insulation pieces. It's just very easy to adjust this way.

If I wear the vest while active, I can see some droplets beat up on the outer fabric layer. It is really comforting to be able to wear your insulation on the move. The Coreloft insulation will actually dry itself out if worn under a shell, and even when wet you will stay warm. To be honest I haven't found out to what extend that is the case. I have yet to really soak this piece. So far I have always stayed warm, and have no hesitation to wear this while active - something I never did with my down garments.

My guess is fleece does perform even better when more seriously compromised, but the Coreloft is not like down in that nothing is left when it gets soaked. If you play in wet and cold environments this is golden. What I like about this over fleece is that it is easier to get on, doesn't require me to put on a separate wind shell, and is a bit lighter and quite a bit more compact when stowed in your pack.

The vest gives me just that bit of extra insulation that I like, for a very light weight and in a very small package. I got it to have just a bit more insulation where a whole other jacket would be too much. As it turns out I wear the vest all the time because it is so versatile. It layers well, and is very easy and quick to take on or off.

Nothing that a fleece and a down jacket don't take care of, but depending on your usage, perhaps a lighter, faster alternative.

Nice review, thanks for sharing it, Jakuchu. I have the women's version of the Atom LT Vest and like it a lot also. I find I wear it a lot more than I ever anticipated, since it's not bulky but provides decent warmth to the core.

Alicia - exactly. I originally got the vest to have just a bit more insulation, where a whole other jacket would be too much. As it turns out I wear the vest all the time because it is so versatile. My most worn warm piece I think.

Nice review! Thanks for sharing it.

I admit to buying my vest as a bit of an indulgence (did I really need it? probably not), but it is indeed quite versatile. I like having a slimmer vest option. Glad you like yours too.

Nice job, Jakuchu. I have an Atom LT jacket that I wear all the time. I have been wanting a vest for a while now because I like the jacket so much! I love how the outer fabric feels!

I think you will not be disappointed. Like Alicia I bought it because I wanted to try something else, but as a bit of an indulgence. I'm like fit a lot, but was never really crazy about it. In usage though like I said, I find it a great alternative and wear it much more than expected.

The opposite is true of the Atom Hoody - I am crazy about it, but wear it less. I always bring it but I just need it less often.

Thanks for the feedback!

Phenomenal core protection with a light weight. Outperforms many down vests in both warmth, wind resistance, and breathability. Compare to the Arc'teryx down light vest, I find the Atom LT more breathable and less prone to be wet.

It is my main winter protection while ascending paired with a 260 Merino wool top. It feels very warm and yet breathes condensed air very well. I carry an Atom LT Vest on every hike.

Material is light and durable but a bit on the delicate side. Size runs true.

Many years of alpine guiding

I agree, Luis. It's a very versatile vest.

I love this vest! I wear it all the time.

It's a great layer for keeping my core warm when I need just that extra something, and it fits under most jackets very well.

The material on the sides and front are different, but both are very durable and soft.

The zipper is nice and stout and the pockets are nice and deep so I can get my whole hand covered and tucked out of the cold.

Thanks for the review, Kyle. For what type of activities do you use your vest?

This is the perfect vest! Make sure you try it on store to get the right fit, but it works as a perfect mid layer and an outer layer in slightly warmer weather. I've used it to hike, bike, backpack, sleep, and I even wear it to work as it's a pretty neutral and stylish vest. Overall 5/5.

Welcome to Trailspace, Nicholas! I also have an Atom LT Vest (women's) and like it a lot for its versatility. Do you have any pictures of yours on to show how well it fits?

In addition to the 4 men's reviews above, there is 1 review for another version of the Atom LT Vest. Read all reviews » 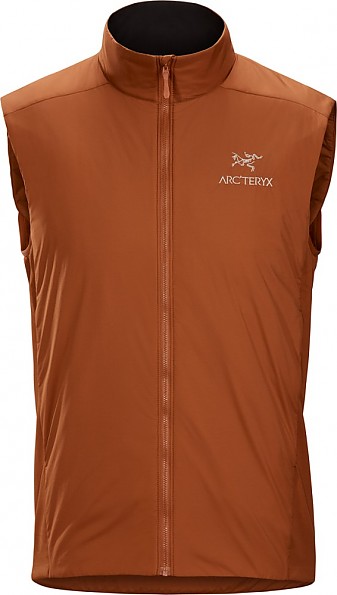 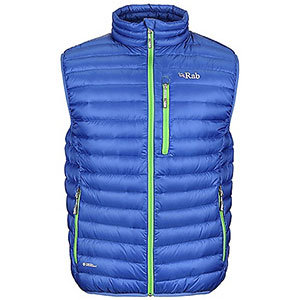