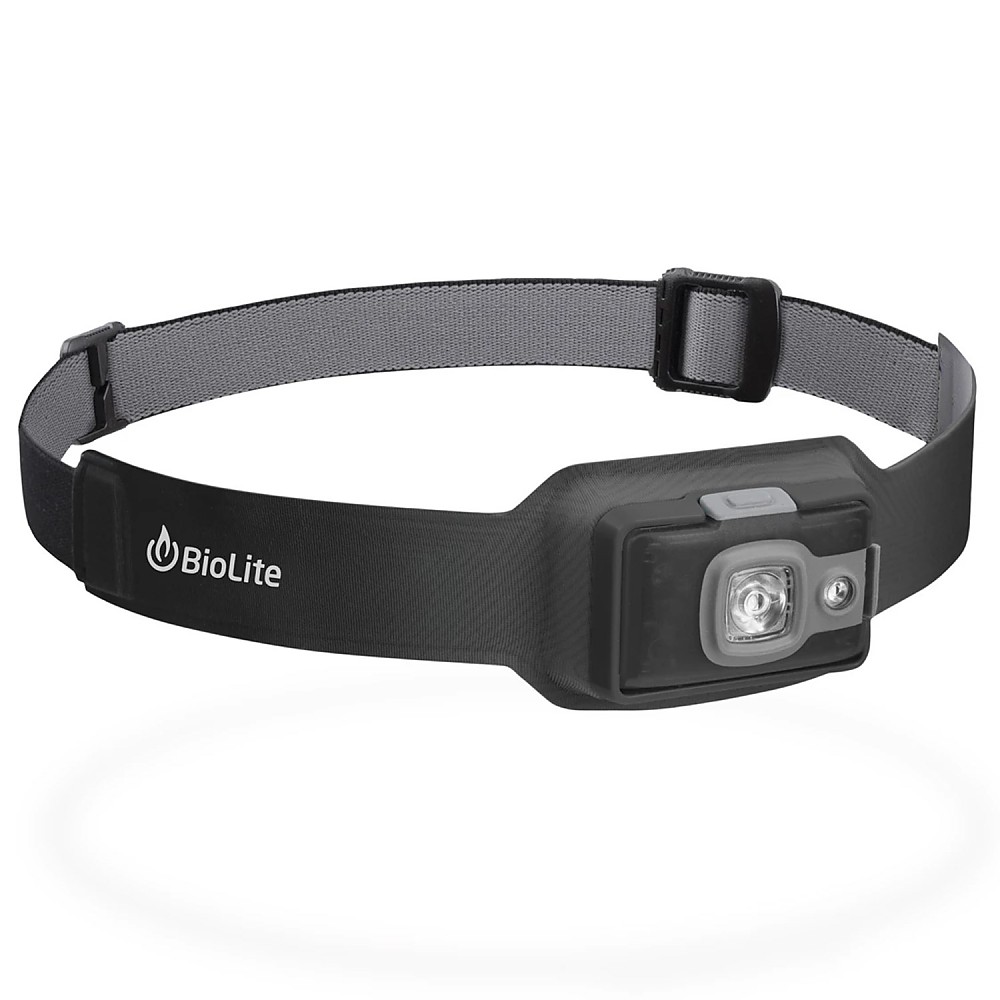 Thin, light, balanced, rechargeable, bounce-free—put the Headlamp 330 on the buy-list. The technology is advanced enough that rechargeable headlamps are finally a good deal. You can't get this much light in this small of a package anyplace else so far.

Remember when a 90-lumen headlamp was the best thing ever? Say hello to 330!

Winter is a time when runners have to run in the dark to get their miles in. Short days mean you need a headlamp. Most flashlights and headlamps are little more than a container for dead batteries and don’t work well for running; they are heavy and made only for distance. The Biolite 330 provides you with as much (or more) light as your favorite Petzl or Black Diamond lights and comes in a teensy, rechargeable package that you’ll actually want to wear running. Incidentally, it’s great for hiking and ski tours too. 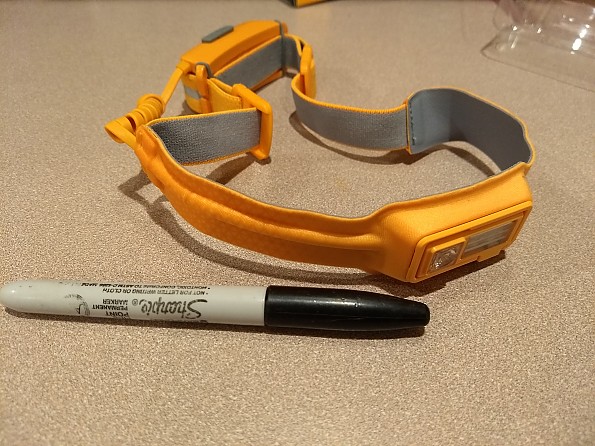 I wore the 330 on lots of slow street runs this winter, several brushy dog-romping runs in the woods and two snow hikes/ski tours. In the woods, it made me feel like I was always surrounded by a bubble of clean, white light. I used it under the sink to do some repairs, in the attic wiring up a new ceiling fan and under my jeep playing shade-tree mechanic. Temps were usually in the range of 25-35 degrees Fahrenheit. I kept using it because it works.

I purposefully omitted snow pictures because literally ANY headlamp works well in the snow with everything covered in white.

I spent some  time in light mist, but no real downpours. Biolite claims the 330 is waterproof in rain but not submersible. 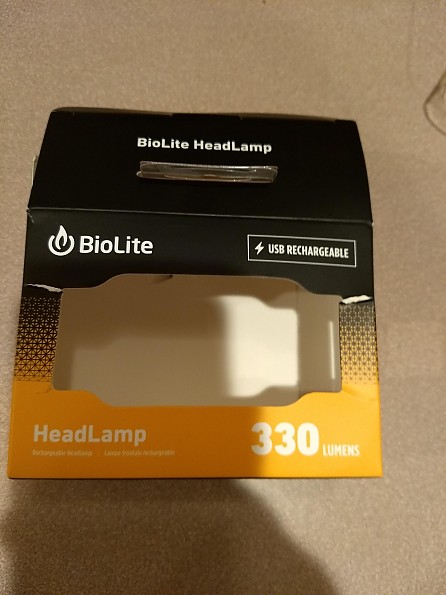 The 330 has a wicking band that sticks to your head and lets sweat pass through. The band reminds me of the one on my old heart rate monitor. It stays put during runs and since its rechargeable battery is in the back it is well balanced and never bounces. Truly, you’ll forget it’s there. It’s not made for climbing so it makes sense that it doesn’t fit over a helmet very well. 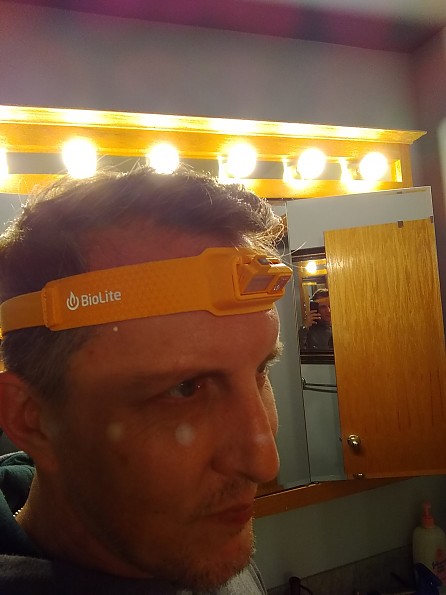 Comparison to other running headlamps: 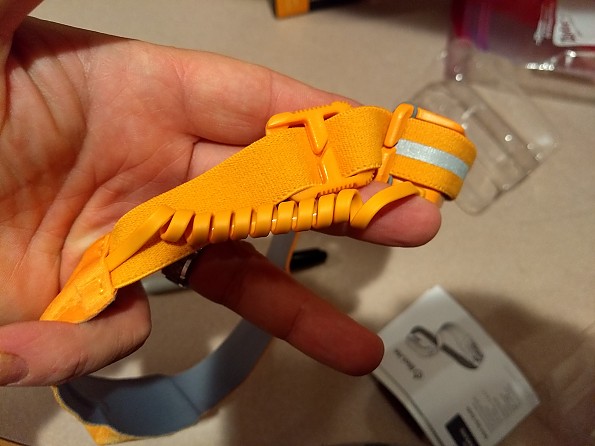 Battery on the rear to help balance the light, making it bounce-free during runs. 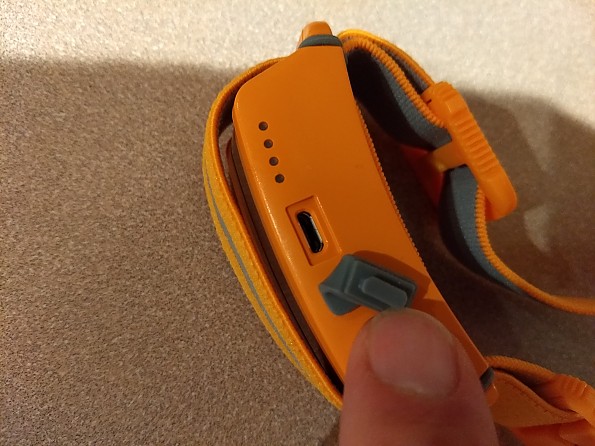 Four lights tell you when to recharge. 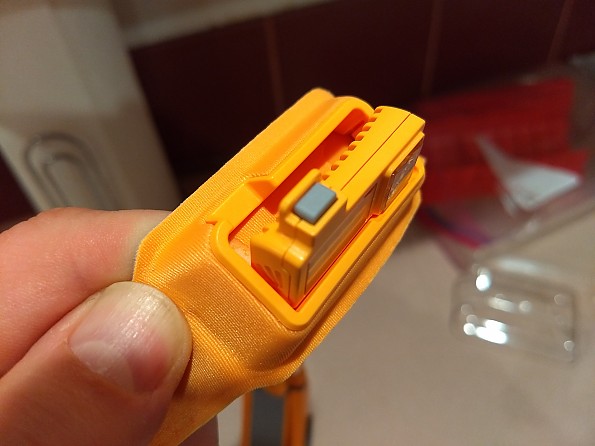 Not a fan of the tiny button but its a tiny light so... 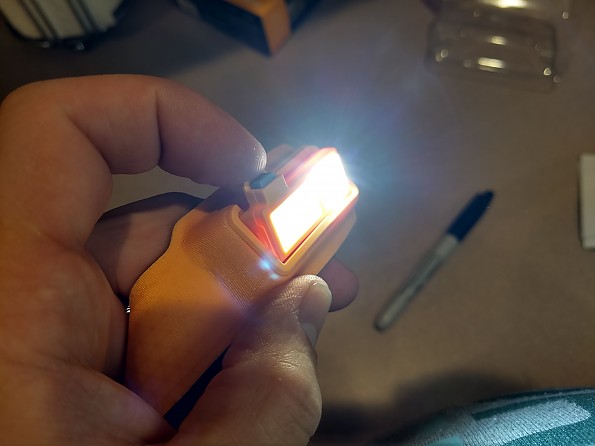 Toggling through the modes 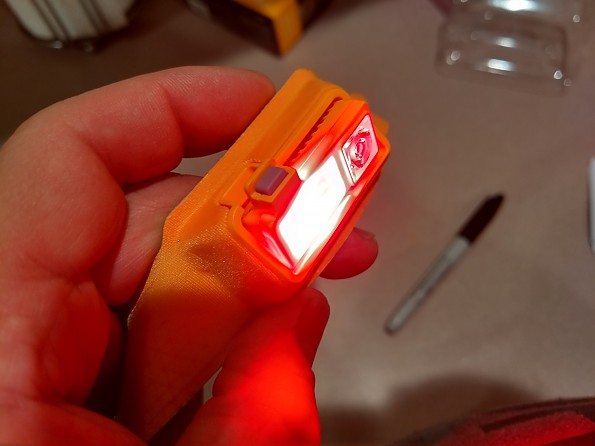 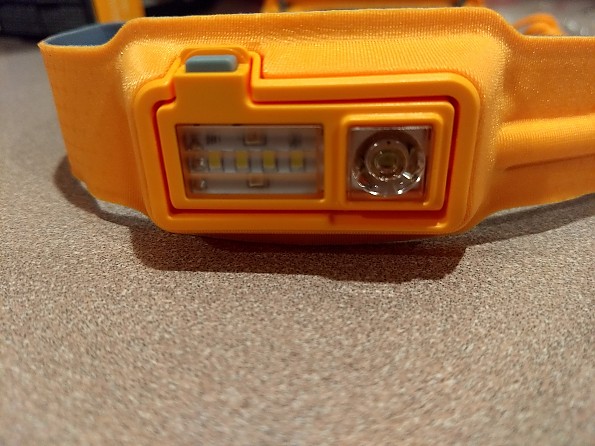 The spot and diffuse lights can be operated together or independently.

Reported to be 3.5 hours on max or 40 hours reported on minimal setting. I didn’t have the patience to measure it on its dim setting but on full-blast, which is where I usually ran it, it lasted about that long in wintery conditions around freezing. On multi-day excursions where you used it for long periods in the dark a solar recharger would be handy. You’ll probably be packing a panel anyway if you’re out for a while. 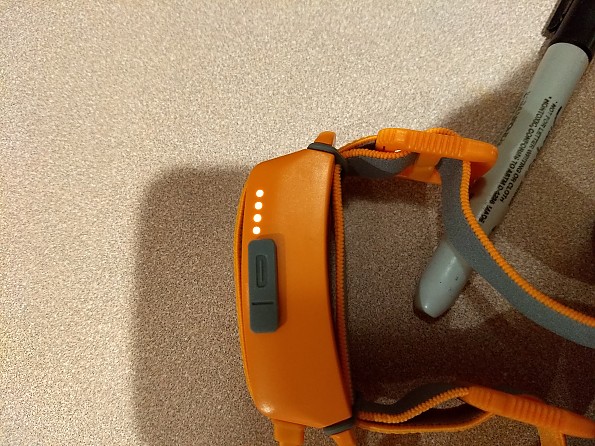 Fully charged in an hour or so

The materials stood up to my careless packing for my snow hike where I furiously tried to stuff 25 liters of cold-weather gear into a 20-liter pack. My food was smashed but the headlamp survived. I don’t see any reason why it wouldn’t last years as long as the battery holds up. The fit and finish appear as good as any other major manufacturer such as Black Diamond or Petzl. 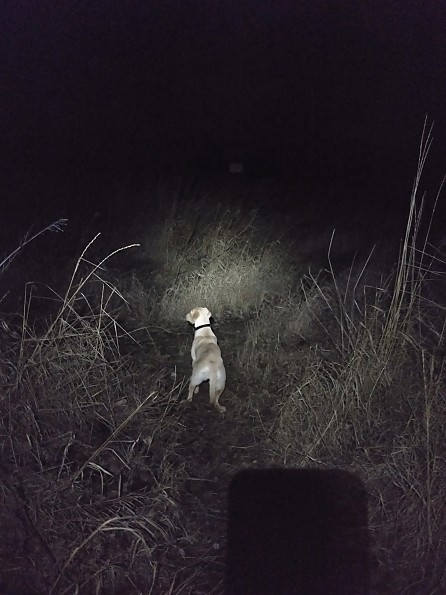 The 330 has a spot beam for distance and a diffused beam for shadow-free close-up work. I mostly used them both at the same time because I have never heard myself saying that I was able to see TOO WELL in the dark. I found the beams to be seamless with no shadows or dark spots. This is a big deal to me because I have a lot of lamps that cast great distance light but make poor campsite lamps, and vice versa. 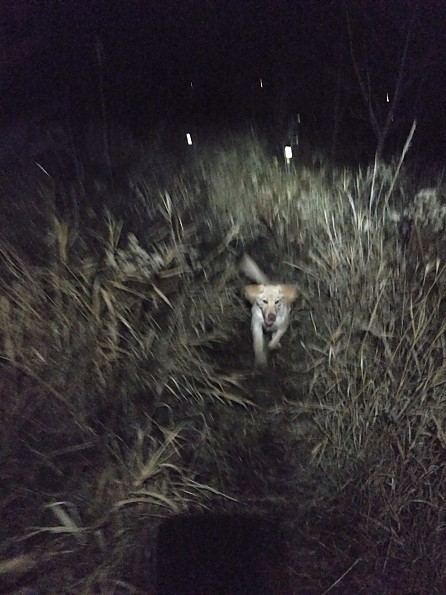 The diffuse setting and lower power settings are more than adequate for camp chores or slow walking. I never found a use for the flasher mode; it tends to bother people. The red mode can be used as a bike tail light. It’s also handy if you don’t want to be able to discern different colors at night (all your candy looks red) or if you want to feel like a commando.

The spot beam claims to illuminate to 75 m but I found it useful that far only in snow. The best range for the 330 is in that 20-30 yard range and closer. 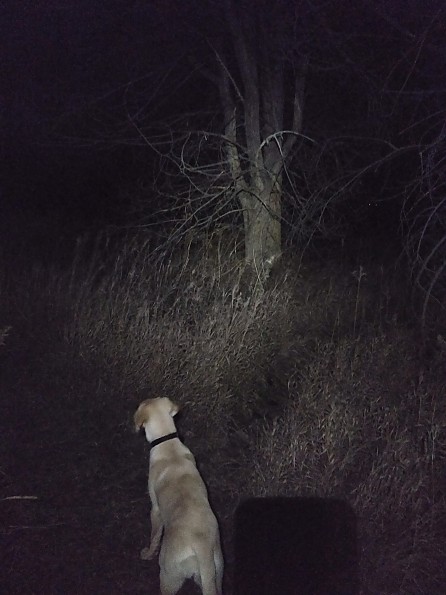 Puppy too afraid to advance because of the lowest beam setting on the light.

Being so tiny, the on/off button is a problem to operate with even thin running gloves.

The tilt is rock solid. 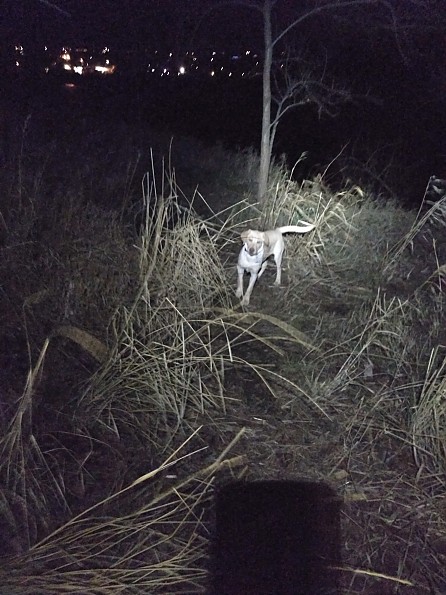 Highest beam setting at about twenty yards, definitely useful for navigation, a bright beam both near and far.

The 330 is best suited for running. Other good uses would be hiking and light climbing that runs into dusk or begins pre-dawn. The batteries don’t last long enough for a proper all-night hiking at full-power. If you can run more than three hours straight in the dark (you’re a stud!) you’ll need something with more battery time or you’ll have to settle for reduced light modes. If you were #2 or #3 on an alpine rope team could the reduced light modes do just fine on snow and suit your needs during an alpine start? Probably. Am I going to try it this summer?  Probably.

Really though, why NOT carry a light like this? It weighs nothing and provides a TON of light, which, considering that light isn’t very heavy, is a whole bunch.

As far as I know this headlamp was never marketed as a mountaineering light but I took it on a summit climb of Mount Baker anyway. After an hour on medium brightness it died with a dead battery. I had JUST charged it the day before. So there I was, last on the rope team with no light. Luckily it was an almost full moon so I was okay but it could have been worse. I'm not reducing its stars because it's not made for cold and mountaineering but if it fails again I will consider downgrading my review.

I've owned a few dozen headlamps and this is the second rechargeable one I've used. I use headlamps for hiking, running, and alpine climbing. I also reviewed a similar headlamp, the BD Iota: https://www.trailspace.com/gear/black-diamond/iota/#review36840

Thanks for sharing your experience with this new headlamp, Jeff!

You're right, Jeff. Biolite didn't design this for the cold-weather crowd, but for camping, running, and general "bounce-free" use.

I bought a Biolite headlamp after passing on the Kickstarter. I’m a supporter of Biolite and use their products. I’ve been very happy with the lamp and I plan on buying the rest of the family they own. I had some concern over the recharge-only option, but so far it has not been an issue.

The light maintains adequate usage time for general camp use and reading in bed.

The three lighting options—beam, LO, and red—give a good range of uses. The beam is very bright, by far the brightest headlamp I’ve owned...it amazes my 11-yr-old son.

It is also the most comfortable headlamp I’ve owned. It is very light. It stays in place once adjusted and doesn’t have to be overly tight. I pull my headlamps down around my neck when not using them. This lamp does tend to rotate around because the back battery pack is heavier than the light.

I’ve used it in the rain and had no issues with water resistance.

Thanks for the review of your BioLite headlamp, Cam.

This product is very comfortable, but sadly is not environmentally friendly.

I love the concept of many of their products. But I am disappointed that they do not try keep their products from being discarded when they break. Some some simple adaptations could be  easily made.

As much as the company claims the battery will last longer than others, you cannot buy any replacement parts for their products, so into the landfill they go.

I have owned several headlamps and this one was the most comfortable, but I returned it because ethically I could not justify supporting this company.

Welcome to Trailspace, Daphne. Thanks for sharing your first gear review with us.