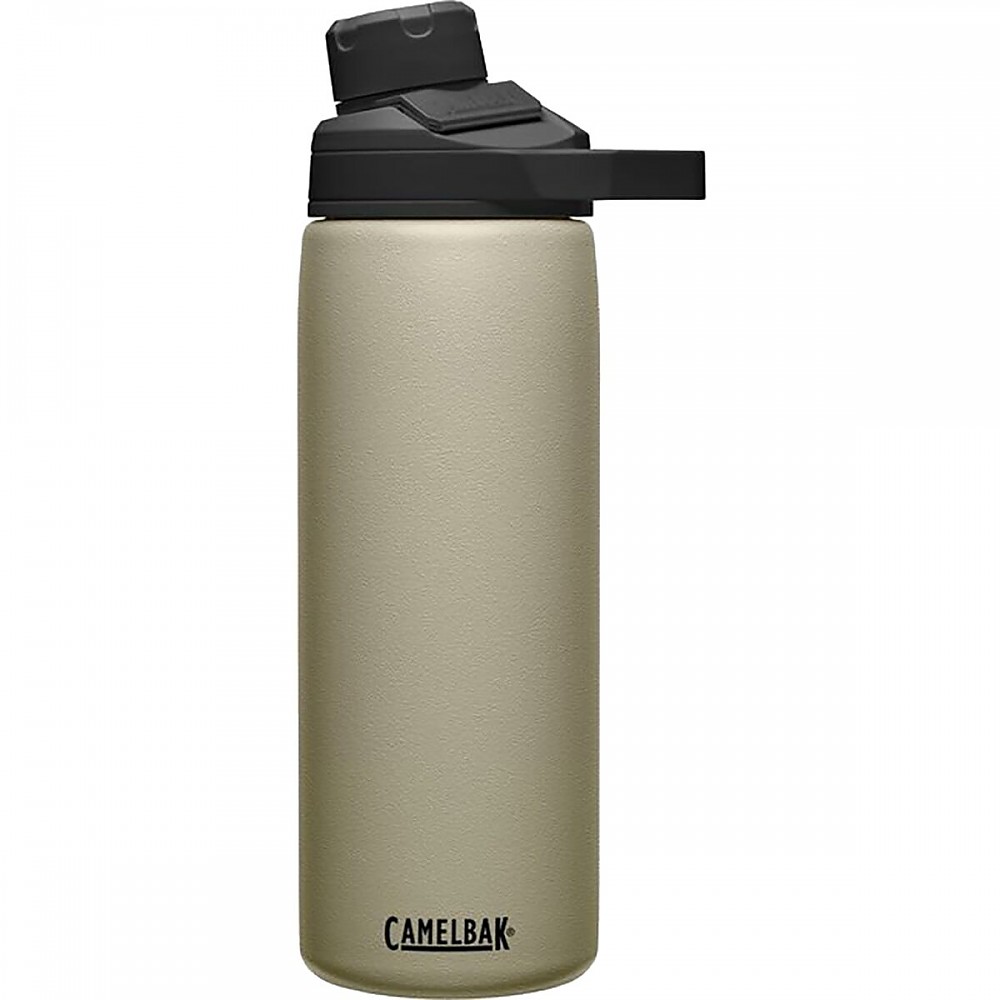 I bought this bottle for walks in warm weather. On warm days you need extra water, so I wanted a one-litre bottle. I wanted it to be insulated because water in a single-walled bottle becomes unpleasantly warm after a few hours in the sun. This bottle fitted the bill.

I was also attracted by its double cap. I like bottles with a wide mouth to facilitate drying and cleaning, but it is more straightforward to drink from a bottle with a small aperture. The double cap offers the best of both worlds.

The double cap on this bottle also sports a sturdy carry handle and a magnetic feature (hence the "Mag" in the name) which keeps the small cap from flopping against your face when you tilt the bottle up to drink. Both caps are screw-on so they are secure against leaks, unlike a flip-top cap.

The bottle looks compact for its volume, at least when set next to my Stanley vacuum flask which has exactly half the capacity (16 oz). This made me doubt whether the CamelBak has a capacity of one litre as advertised.

To start with, the one-litre figure is incorrect even though it is imprinted on the bottom of the bottle as the metric equivalent of 32 ounces. 32 fluid ounces translates to 0.95 litres. I do not have the means to accurately measure volume, so as an alternative I stood the bottle on an electronic scale, zeroed the displayed weight, and filled the bottle with water. According to the physics I learned in secondary school, one litre of water weighs one kilogram, so this is the weight that should have been displayed on the scale with the bottle full.

Filling the bottle up to just below the neck, that is to say about an inch down from the top, gave a reading of 912 grams. Filling the bottle right up to the top increased the weight to 963 grams, but this is unrealistic as a measure of capacity because you need some clearance to screw the cap on. This admittedly rough-and-ready test indicates that the bottle's capacity is definitely less than one litre and, in practice, it falls slightly short even of the lesser figure of 0.95 litres.

This is a marginal issue, however. What matters more is whether the bottle succeeds in keeping its contents at a constant temperature. CamelBak says this bottle can keep drinks cold for 24 hours and hot for six. I have not tested this, but I have used the bottle on walks lasting several hours on sunny days when temperatures in the shade were in the upper 20s (that's celsius, equivalent to about 80 degrees F) and it kept my water cold.

The downside of this bottle is its weight. It comes to 479 grams (16.9 oz) empty, or almost half a kilogram. However, you cannot expect an insulated stainless steel bottle of this size to be lightweight. Interestingly, the measured weight of this bottle is less than its official weight of 493 g as given by CamelBak on its website. Most of my gear weighs more than advertised—this bottle is one of the few exceptions.

I have had this bottle since spring this year and I have used it on a number of walks in warm weather. I have been using other insulated water bottles for years.