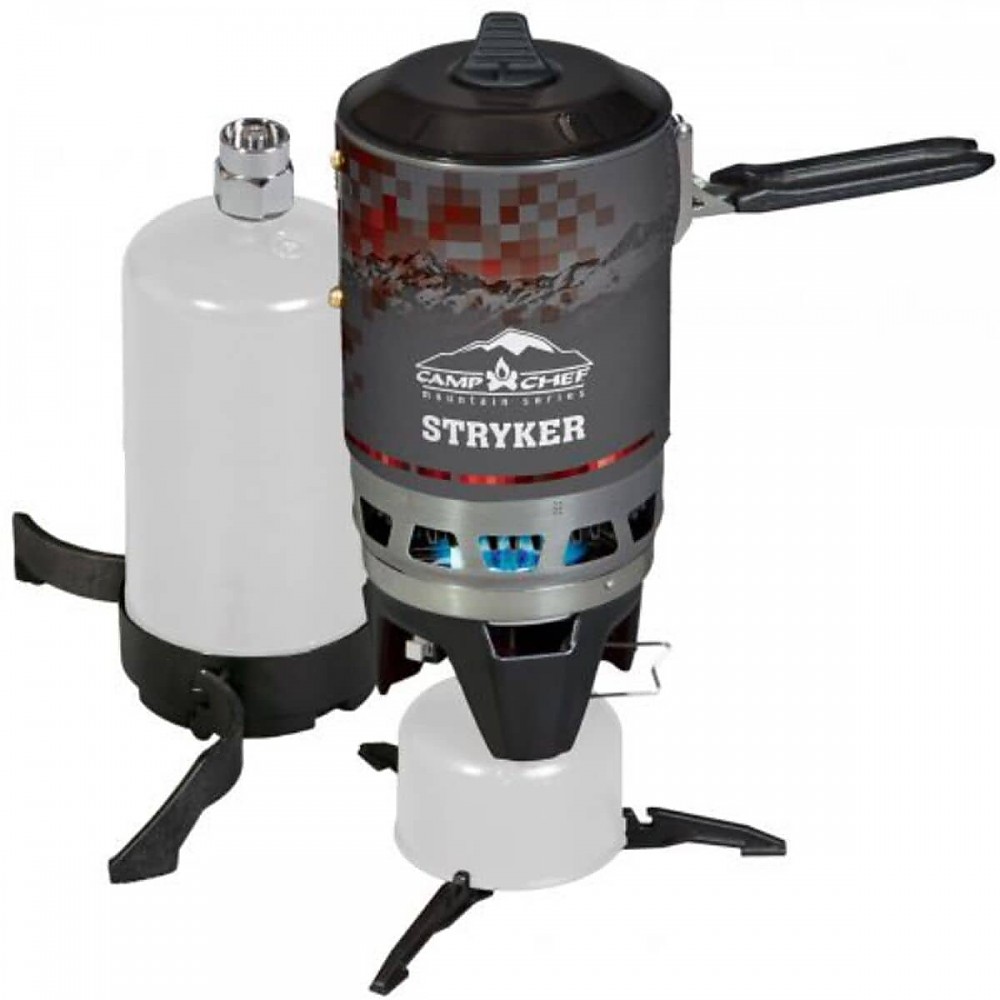 Quality build and everything fits inside, including 8-ounce fuel canister.

I bought this stove to replace my JetBoil in which first the piezo igniter quit, and then the burner element disintegrated and died during my 2018 bicycle tour. I wanted a stove that would hold up under extreme conditions and pack up tight and compact for travel inside my bicycle panniers. The Camp Chef Stryker 100 sure looked like a winner as I was viewing it on the Amazon website.

For comparison purposes, I’ve included photos of it next to my old first generation JetBoil. 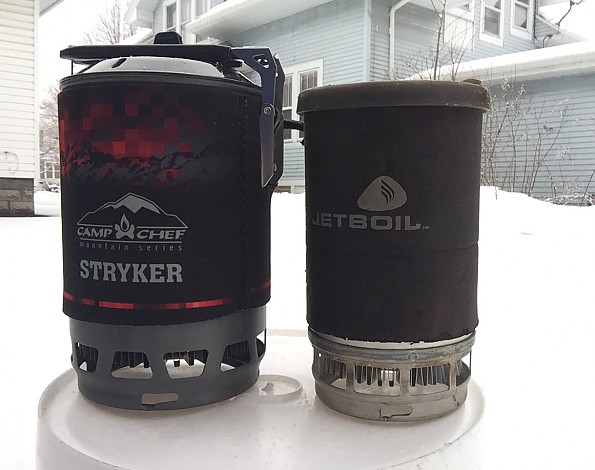 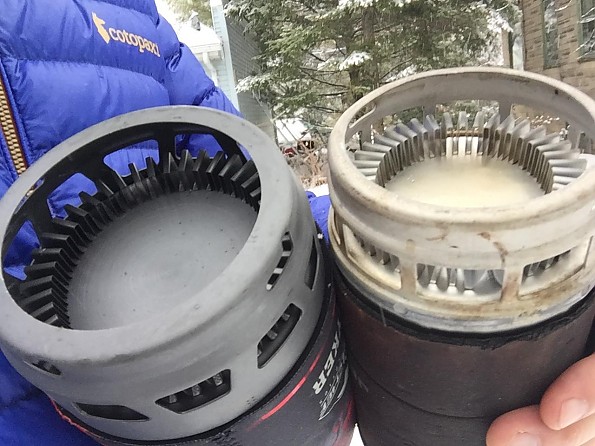 In viewing from the bottom, along with the obvious increase in diameter, one can see a somewhat burlier flux ring on the Stryker (left) and a perceived improvement in the venting for wind resistance.

Notice in the images below, the difference in the space occupied by each in my front pannier. 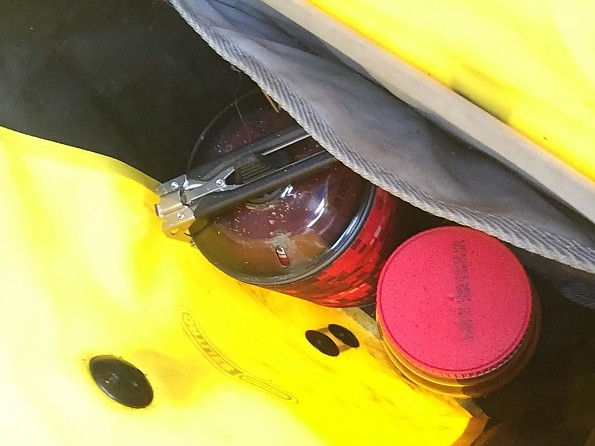 JetBoil and fuel and coffee container 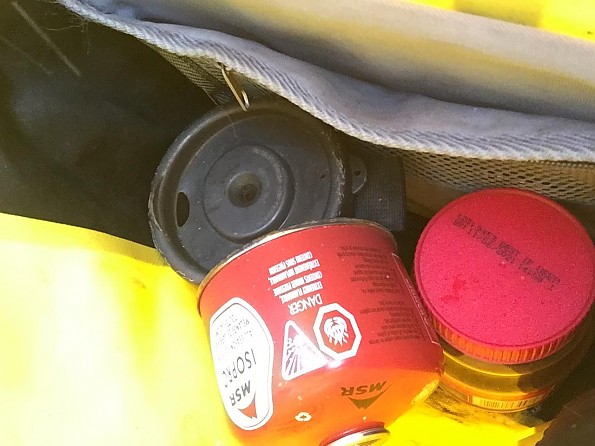 When I opened the box and did a close inspection of the stove, I could immediately see that it was better constructed than was my JetBoil. I liked the fact that the solid handle locked into place and also that I wouldn’t need to hold onto a flimsy nylon fabric thing when handling boiling water. The handle unlocks and folds over the top of the lid and locks it down via a wire toggle. That to me is awesome! The JetBoil lid never stayed on and the stove contents would spill into my pannier every time. 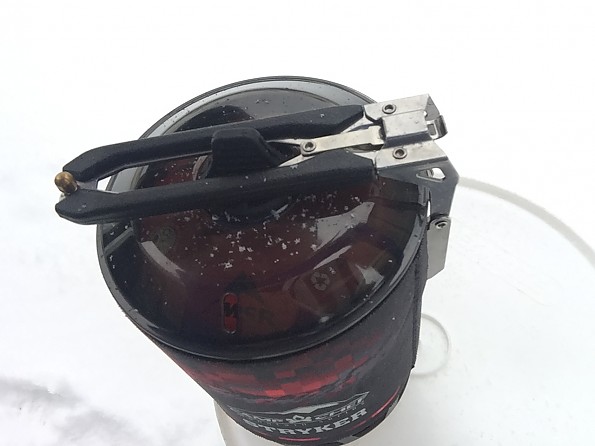 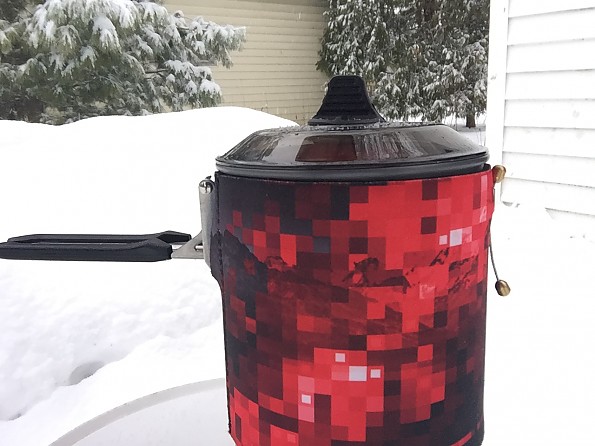 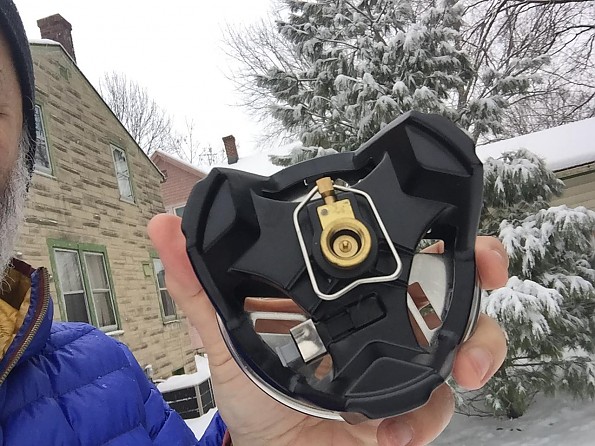 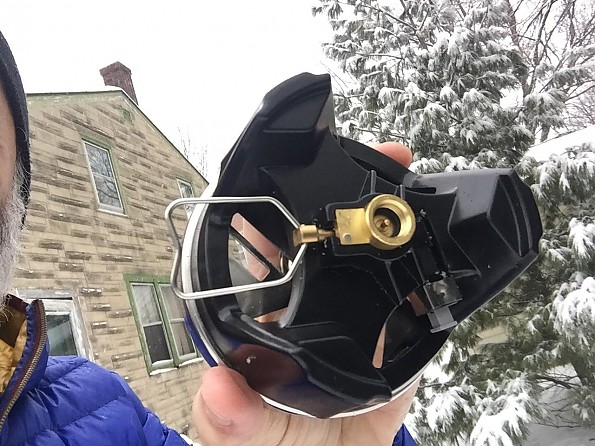 The real winner here, aside from heating water quickly via a flux ring setup under the pot, is the fact that the stove burner and feet fit inside the pot AS WELL AS AN 8-OZ FUEL CANISTER! The Camp Chef Stryker pot is a bit wider in diameter than the JetBoil, and will accommodate 8-oz canisters made by MSR and JetBoil to be carried inside the pot along with the burner element and legs, with the lid battened down. The Coleman canisters will not fit. I’m not sure about Primus canisters. Haven’t tried them.

The fuel canister screws onto the bottom of the burner element, as you might expect, and the pot when aligned with the dimples in the burner, pushes down and locks with a short clockwise twist. It is tight when new, but will become easier with repeated use. My Stryker ignited on the first push of the piezo switch every time.

When stowing the canister inside, along with the burner element, the first thing to go in is the collapsible feet, (the feet click into place and won’t flop around like the JetBoil feet did, also had to pay extra for the JetBoil feet. The Stryker feet were included) 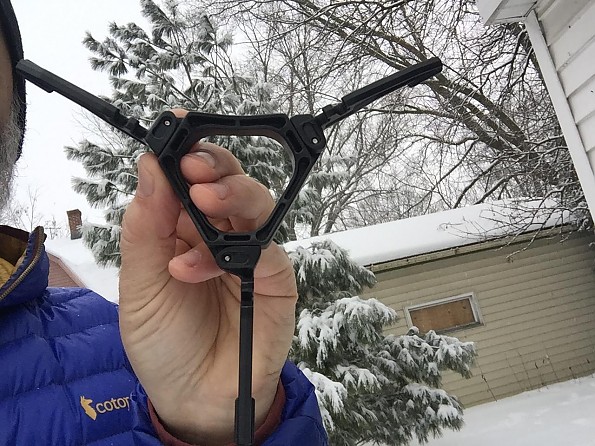 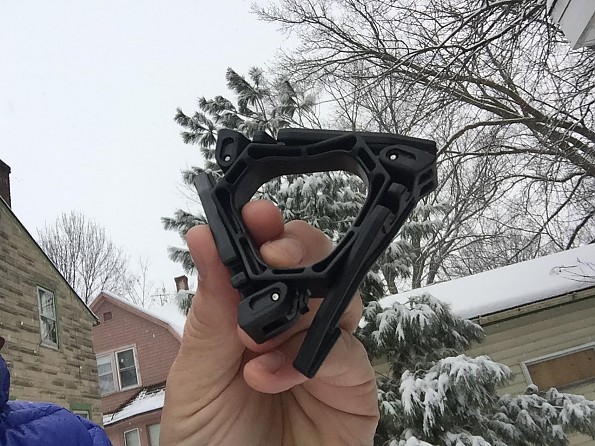 then the fuel canister sort of snaps down into place inside the flange on the burner element. (Notice the piezo igniter switch) 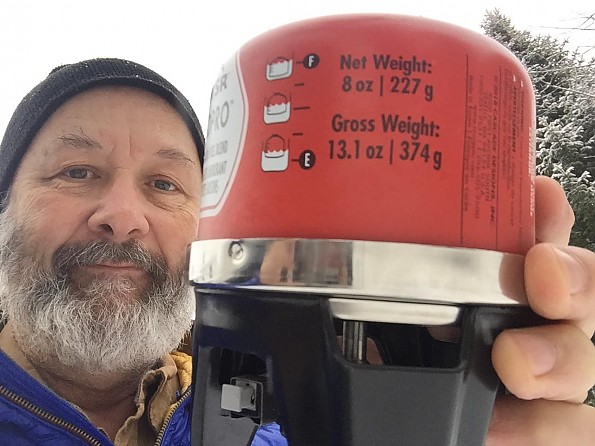 Be sure that you don’t put the plastic cap on the fuel canister nozzle (if it came with one) and that the nozzle is centered. The canister nozzle nestles under the rubber thingy on the pot lid. 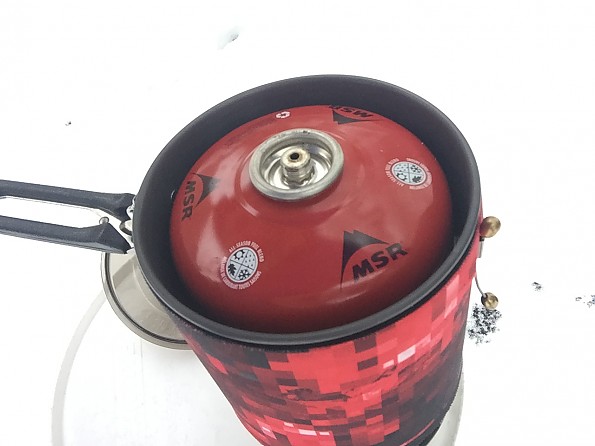 Also, make sure the pot and fuel canister are dry before stowing the burner element (notice the surface rust inside the flange. The rust will come right off with fine steel wool.) 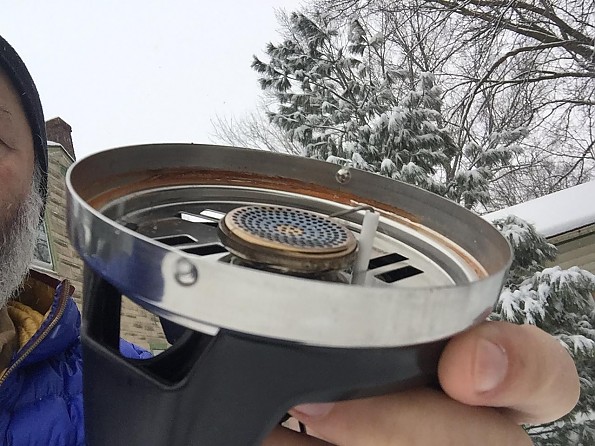 So not having to settle with those goofy little 4-oz canisters for economizing space is a big winner in my book. Well, that and the price, of course.

I made some coffee this morning out in the driveway with the Stryker. I boiled 2 cups of water as I normally do for coffee, and timed it with my flip phone. Bear in mind that this time is for 2 cups, and the outside air temperature is 30° F. 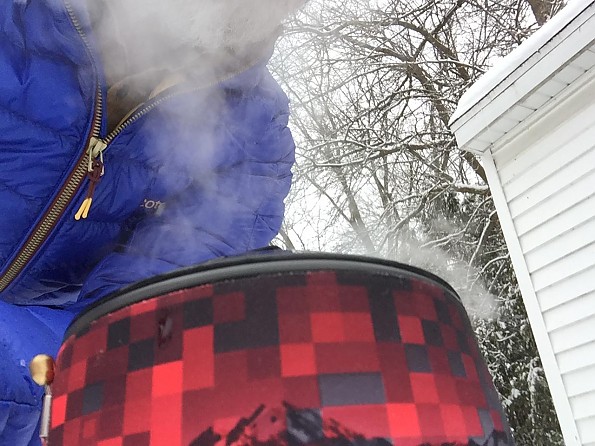 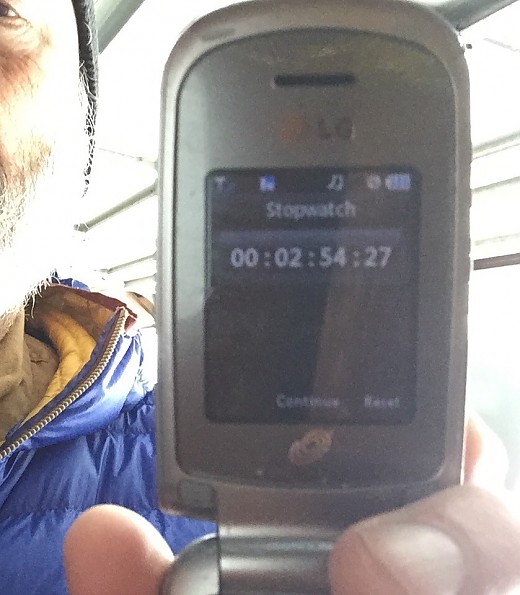 This stove does everything my JetBoil did, for half as much money (today's prices). Well it does MORE actually, the finer burner control on the Stryker can be turned down to a simmer. (My JetBoil had two settings: ‘Off’ and ‘Smelter’.)

Please understand that I’m in no way bashing the JetBoil. I bought the one pictured in 2005 and it has performed for me on thousands of miles of trekking, bicycle touring, and backpacking. It owes me nothing. The people who developed the ‘flux ring’ technology at JetBoil deserve our gratitude.

I’ve used a JetBoil over the years during cross-country jaunts on foot and bicycle, and I’ve used this new Camp Chef Stryker 100 on my most recent bicycle tour.

This is a lower cost alternative to the JetBoil stove. It has the same setup, good efficiency, and saves you enough money to buy a bunch of fuel canisters. 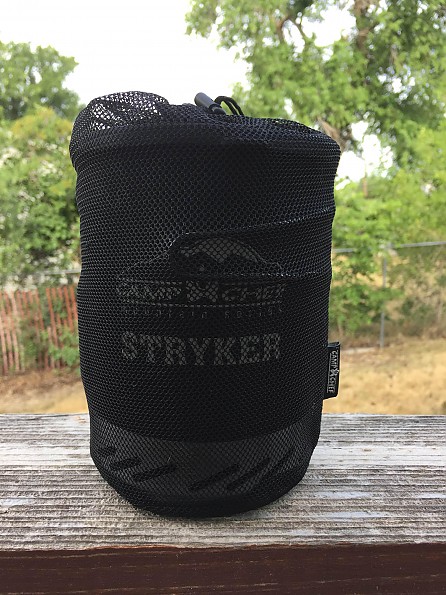 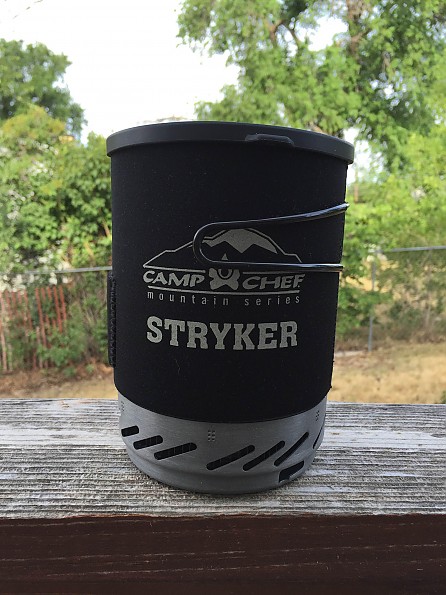 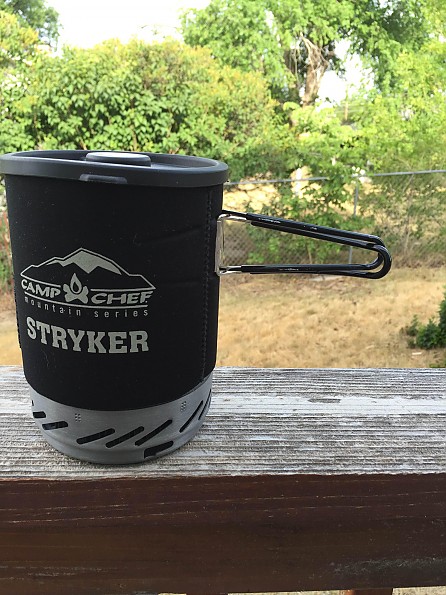 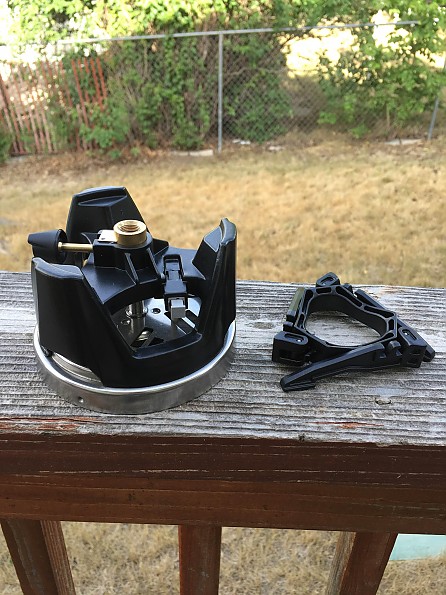 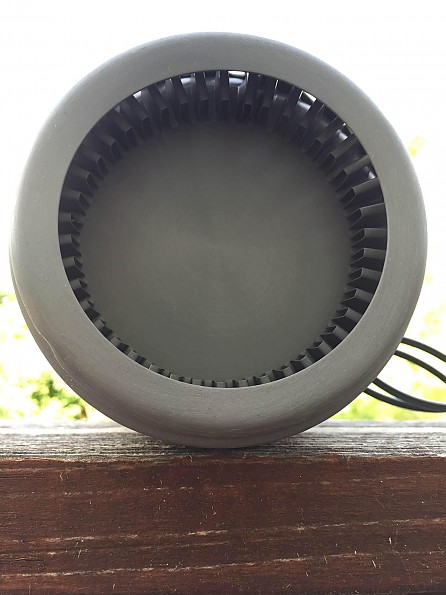 I kept on bouncing back and forth between buying a JetBoil or an MSR Windburner. I had finally decided to pick up the MSR when this stove showed up in a Google search. I spent some time researching it and couldn't find any negative comments. Mostly positive, and about $40 cheaper, so I figured I'd roll the dice.

I'm glad I did. I'm sure I would have been happy with the MSR (I have an MSR PocketRocket that I love), but I haven't had a problem with the Stryker and it was significantly less expensive. By necessity, I have had to learn how to squeeze the most value out of every dollar I spend, so while I often buy the high-dollar, high-quality items, I will press my luck now and again. It doesn't always work, but it did this time.

The stove setup is straightforward. It has a snap-on stabilizer that fits on the gas canister and provides more stability. It has the burner, the pot (with handles and neoprene cover), and a lid. The gas canister nestles inside the pot along with everything else for space conservation. It fits a little on the loose side, but I put my micro-towel in there and problem solved.

The Piezo ignitor works fine and the flame starts on the first try every time. It boiled 16 oz of water in 2 minutes and 37 seconds (this was my best time — all times that I monitored were below 3 minutes). There are baffles around the bottom of the pot that protect the flame from the wind. One item to note though is that when I turn the stove full open, it sometimes seems like the flame sputters a little. I turn it down a tiny bit and it burns true and hot.

I haven't cooked food in this yet because I mostly do freezer bag cooking on the trail. The flame is adjustable so I have no concerns about it running too hot if I was cooking in it.

I could have spent the extra money on the bigger name, but I have not been the least bit disappointed with this stove and I have no concerns about it failing on the trail.

This is a quality product at a budget price. It has a built-in starter and weight wise it is light and user friendly.

Setup is easy and with the built-in lighter it fires right up. Flame control is pretty good, but simmering is not the greatest. Its strength is heating water, if you purchase the simmer plate it gives you more control over just using the flame.

The stove is pretty good in the wind and boil time for 1 or 2 cups of water is about 2.5 minutes with excellent fuel efficiency.  Darn, my spouse was even impressed with this stove and that is saying something.

This product is fairly new to us but our "real world" use so far is great! We have camped, car camped, hiked and have found this to be one of our best purchases. Quality product that performs like a champ. 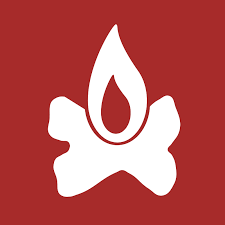