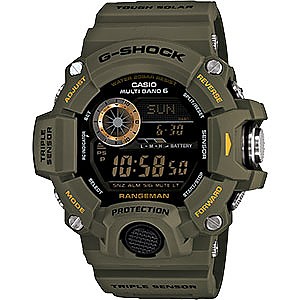 Ease of Use:
This is something that I felt could use some help. I may be spoiled on the ease of touch screens now, but cycling through all the menus is a pain.

Price
For a solar powered "ABC" watch with a ton of features that can stand up to the abuse the Rangeman can and still look great, I think the price is a steal.

While the Rangeman may be the best G Shock watch on the market, it doesn't mean it's the best choice for everyone.

Don't know if it's right for you? Just take our little test and see which side you fall on:

It's not for you

Before the days of weathermen and weather apps, we had to figure out ourselves if it was going to rain. One thing we realized is that when the air pressure dropped, a storm was likely on its way.

Having a barometer on your wrist means that you're much less likely to get caught in the rain when you're out hiking or whatever it is you people do outside.

So far, the measurements have been extremely accurate, from what I can tell.

I no longer have to check my achey knees to tell if there's a storm a-brewin'.

If you're into hiking, climbing, mountain biking, or skiing, you'll definitely get more use out of this feature than I do. Especially if you like competing to see who can go higher.

I live in one of the flattest states in America so my readings are usually within 50 feet of sea level.

However, altimeters can be extremely useful for survival as well.

Combined with a compass, you can use your altimeter to navigate through hilly or mountainous terrain.

Sure, you can use your watch to navigate but it's much easier when your watch has a digital compass built in.

What I like about the Rangeman's compass is that it doesn't just tell you North, Northeast, etc. It actually gives you the degrees so you can eliminate the guess work.

I'll be straight with you guys, the only reason I ever check a thermometer is to complain about how hot or cold it is.

The only reason most of us ask what the temperature is outside is to figure out what to wear.

However, I can definitely think of a few scenarios where knowing the exact temperature could be helpful to survival.

For instance, if it's only 38 degrees (Fahrenheit), you probably don't have to worry about your water freezing over.

The problem I have with the Rangeman watch is that I have to take the watch off to get an accurate reading.

Because I'm just so darn hot and sexy that being that close to me will obviously skew the results.

If you hadn't noticed from the pictures, the G-Shock Rangeman has a negative display, meaning it's light text on a black background vs. dark text on a light background.

The reasoning behind this is that there will be less light to give away your position if you happen to find yourself in a covert situation.

The fact is that if they were really worried about the small amount of light or reflection that a positive display would give off, they wouldn't have used stainless steel screws and clasps, bright yellow lettering, or a crystal without a matte finish.

Let's just be honest. It's got a negative display because it looks cool.

The Rangeman performs pretty well at its original job too; being a watch.

There are 31 timezones built in so you never have to guess or do math, 5 daily alarms in case you REALLY have trouble waking up in the morning, a stopwatch, a countdown timer, and I'm sure a bunch of other features I haven't found yet.

All of these functions can be saved (I think there are 40 or so memory slots) so you always remember exactly how long Grandpa's story about 'Nam lasts.

Plus, the GW-9400 is atomic which means that you'll never have to set your watch again, it just does it automagically!

This is another feature that I don't get enough use out of in my every day, posh, comfy lifestyle though I'm sure it would be invaluable out in the woods.

The Rangeman GW-9400 comes loaded with every sunset and sunrise (not in that order) for every latitude/longitude coordinates until something like 2099.

Can you imagine if the Mayans or Druids had that? They would have saved so much time!

Of course, one of the best things about the G-Shock Rangeman watch is that it can take a beating.

Not just a beating but a tsunami, a dust storm, and an earthquake too.

The GW-9400 is water resistant (to 200m), mud resistant (case and buttons are sealed to keep dirt, mud, debris out), shock resistant, and quite possibly kid resistant. Though the last one is still being studied.

It can also take temperatures down to 14 F degrees (-10 C). I don't think I can even take that kind of cold.

I can't tell you how many watches I own that are just sitting on a shelf because the battery has died and I'm too lazy to go to the jeweler to get them replaced. So solar powered watches are a big plus to me.

According to Casio, the G-Shock Rangeman can last up to 7 months without any light.

It's one less thing you have to worry about recharging or replacing when SHTF.

What I Liked About the Rangeman GW 9400It's Badass

Just wearing this thing makes me feel like a member of Seal Team 6.

I keep waiting to receive orders from the Pentagon about my next mission.

But seriously, it really does look awesome. Be prepared to receive a lot of compliments from a lot of burly guys.

I've had my share of watches that looked great from afar but felt like they came out of a Crackerjack box when you actually held them.

It's not "heavy" but it definitely feels solid. Nothing feels cheap or "chintzy". I'd say it weighs about the same as my old Fossil watch so there isn't an issue with weight.

What I really like is the attention to detail that went into this watch.

For example, on the end of the strap is a raised section with some knurling or whatever you'd call it. This little bit keeps the strap from coming out of the keeper and flapping about all willy-nilly.

Also, all of the buttons feel solid when you press them. I've owned plenty of watches with buttons but they never felt right when I pushed them. I thought it was just a watch thing but Casio proves that they can be done right.

For my military folks, I'd like to point out that it's easy to press these buttons while wearing gloves. I double checked with my Mechanix gloves and I had no problem.

It's Got a Ton of Features

I won't bore you by listing off all of the functions and features that the G Shock Rangeman watch has, I think you get the point by now.

What's important to me is that I've got this amazing weather station on my wrist, ready at the touch of a button (or in 10-15 minutes after I take it off my wrist if we're talking about the thermometer).

And unlike my phone, the device I used to get all of my meteorological data from, I don't have to worry about this watch getting wet or dirty or bumped around.

What I Didn't Like About the Rangeman GW 9400The Display

Yeah, yeah, I read all the reviews and heard all the complaints about how hard the negative display is to read in less than optimal lighting. And I bought it anyway.

And I'll be honest, it's not the easiest screen to read, even with the backlight.

But that isn't even my issue.

The problem is that I've gotten so used to my touch screen technology that trying to read all the little indicators and text makes my eyes hurt.

There is so much going on in such a small area that it gets overwhelming.

"At a glance" will never be used to describe how I get information from my Rangeman.

More like, "at a squint, and then a couple of button presses, and then some more squinting and tilting my wrist."

And if you think the negative display might be an issue for you, I'd really recommend getting something else. I mean what's the point of all these cool features if you can't see or use any of them?

Check out the Rangeman GW-9400-1CR instead. It's the same watch in black without the negative display.

This goes along with my gripe about the display.

I'm just so spoiled with the simple, intuitive user interfaces of today (cellphones, tablets, etc) that having to learn how to navigate with actual buttons is cumbersome.

The Rangeman watch has so many incredible features and abilities but the price that comes at is having to cycle through them all to get to the one you want.

Now I've got to remember where in line each function is and how to set an alarm and how to change my time zone and how to yada yada yada.

Just imagine you had to scroll through each one of your apps on your phone every time you wanted to access one.

Just saying that it may take you a week or so to get it all down.

Look, I'm not a scientist.

I have no idea how to make a thermometer that you wear on your wrist totally ignore your body's heat and only measure the atmosphere temperature.

But I do know that by the time I take off my watch and leave it somewhere away from the sweat lodge that is my body for 10-15 minutes, I don't care what the temperature is anymore.

I know that if I was in a more life-or-death survival situation, knowing the temperature could prove useful.

But while the satellites are still spinning and the S hasn't H the F yet, it's much easier for me to just look it up on my phone.

You can read the full article at KnowPrepareSurvive.com

Source: Tested and reviewed it for knowpreparesurvive.com 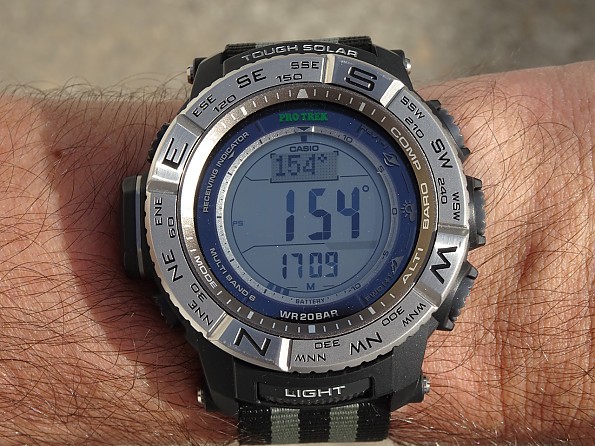