The Elkridge has been discontinued. If you're looking for something new, check out the best backpacking boots for 2022. 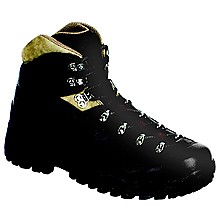 I have to admit that the main appeal of these boots was that they were so amazingly cheap through Sierra Trading Post. My 12-year-old daughter needed boots for an 8-day/7-night backpacking trip in the Porcupine Mountains. She has just started to hit puberty, so it is unlikely that she will be able to wear these boots by next spring. Thus I was reluctant to pay a lot of money for boots she would wear for one season. On the other hand, since the trip was moderately long and completely self-contained, she would be carrying a pretty heavy pack so she needed reasonably good support. It was her first real backpacking trip, so I really didn't want bad boots and sore feet to ruin the experience for her.

My daughter broke in the boots by wearing them for a moderately long day hike (including some up and down hill sections) and scrambling over rocks. The one thing she noticed immediately is that the cheap, thin insole has almost no arch support. The tiny ridge at the arch is less than a half inch wide, so it really doesn't do anything. I replaced the insole with a better Spenco "hiker" insole which cost $19 (strangely, the more expensive Spenco "backpacker" insole was very uncomfortable because the arch support was too far back to the heel). She ran out of time before the trip and did not do the additional hiking that she should have to properly break-in the boots, but she had no trouble at all with them. In fact, she liked them a lot and felt like they were just right for the trip.

In addition to the low price, the other amazing thing about having this boot work well for my daughter is that usually buying shoes for her is a nightmare because she is extremely picky about fit. I once took her to two malls plus three independent shoe stores just to get a pair of gym shoes. So the only reason that I took the chance of buying these mail-order is that they were so cheap that it was worth the chance that I'd have to pay to ship them back if they didn't fit. If I bought boots from a local store where she could try them on first, I'd expect to pay a minimum of $90 for an equivalent boot.

Good quality boot for the price. Easy to break in, comfortable. Not quite as heavy-duty as some others...