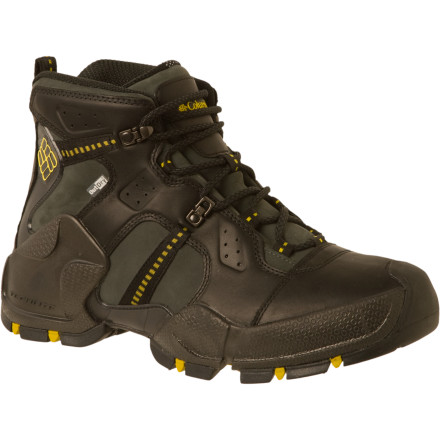 Performance without the price, and these still very much hold their own against some newer footwear I've been testing. I think these are a bit heavy compared to other options, and they excel in colder climates better than I originally expected.

I was looking for boots that would reliably take me through a few seasons of hiking and not break the bank.  I've now used these through more than a year's hiking season and they've successfully served me for more than 170 miles. Whatever the downsides may be, they have done a good job getting me this far. 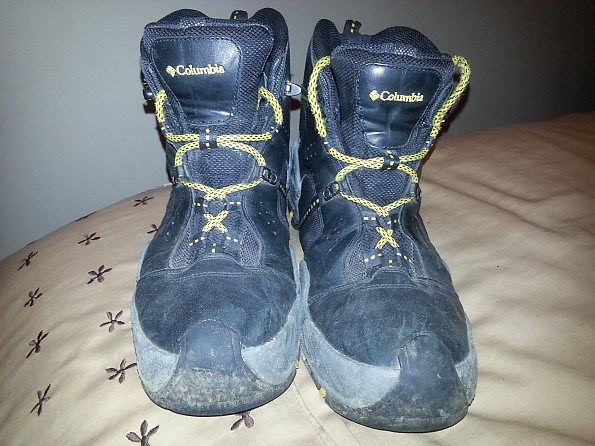 Hopefully you can see the tread in this next picture. They're still usable for a while. Though now I think I'll use them as light winter boots since the aggressive angles in the tread are getting a bit too rounded to give me confidence when I'm moving over wet rocks. 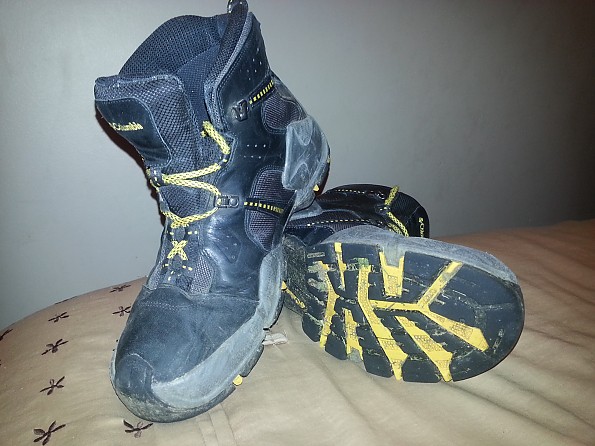 Size: I usually wear 11W. Based on reviews from various sites, I ordered 11.5W and that was perfect while wearing thick wool hiking socks.

Weight: 47.89 ounces on my digital postal scale. I don't think they're too heavy, but they certainly don't qualify for the "Ultralight" category. On the other hand, they're a whole lot lighter than a pair of traditional hiker boots.

Break-in period: They arrive a bit stiff, though not too bad. More or less, you should be able to hike in them right out of the box. They broke in pretty quick, and then they really got soft after 30 miles (in a good way).

Outer design: As I've read in other reviews, yes, these are designer boots with the look of the current century. If you'd prefer a boot that looks like it would be at home on Roger Moore from an old James Bond movie, then these would not be for you. I think they're very cool.

Note that while they are not a thin profile boot, they are not fat boots either. Have you ever worn shoes that felt so big you needed to walk differently to make sure you don't trip? That is not an issue with these boots.

Note that the shoe laces are unique and you won't be able to get **exact** replacements (I spoke with Columbia and they do not have replacements that are anywhere near the same thing in color or type... I was surprised at that answer). Clearly this is far from being a big deal, but you might give some thought to replacements for when they wear out down the road. Columbia pointed me to an express shoe lace online business, though I did not care for what I found there. It looks like there are some great options at Amazon.

Inner design: Columbia put a whole lot of thought into this boot's performance design, and it is clearly designed for alpine adventure. I'll first point out that they are not heavy (I saw a review to that effect, and that person must be a "gram counting" through-hiker wearing flip-flops, because 98% of other boots seem to be heavier than these).

The support is sure-footed, and the inner mid-sole provides a perfect and rigid pivot point for when you're hiking with a load (think about needing boot-rigidity when you have a loaded backpack on and you're ascending/descending rocks). Top marks here.  So they're not designed for "fast and light", but they will hold up to heavy loads and distance.

Insulation: These boots have light thermal insulation that is comfortable indoors and out. For summer hiking in the heat, that may prove to be too much in some areas.  I've only worn them in temps up to 80°F and they were fine with no excessive foot sweating. Above that, I don't know. Also, I don't know how warm they'll keep you in various winter weather. I've worn them comfortably down to 18°F on a full-day snow-hike without any over-condensation, excessive foot cooling or the such. That said, the insulation and waterproofing breaths well.  I've never been overly-sweaty in these boots.

One last thing: Why only 3.5 stars? As much as these have performed very well, they are not top-shelf.  I've owned "the best" before, and these are a little less than "the best". I'm not complaining. For less than $100, these are nothing short of an amazing value and they are far and away better than a typical sub-$100 shoe.  If I wanted a "do it all" sub $100 shoe, would I buy it again?  Yes, yes, yes!!