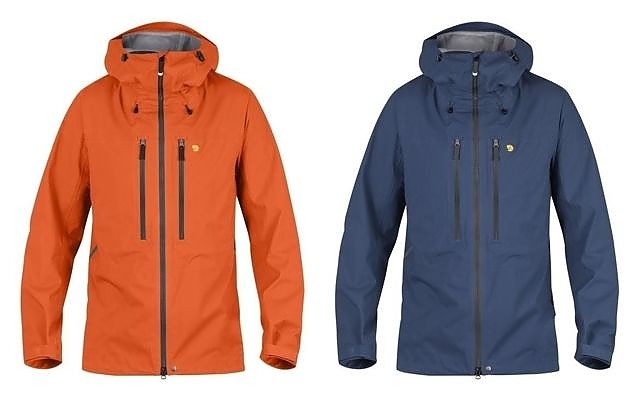 Okay, so I bought this blue Fjällräven Bergtagen Eco-shell men's jacket quite some time ago, a couple of years. Have been wearing it on trips and during the winter season. I have yet to try it during summer season.

In the beginning it was really repelling water; after two washes, it is not so water repelling and I'd say an Arc'teryx Alpha SV is much more water repellant, though I prefer the Bergtagen overall. I only treat it with Fjällrävens own repellant spray and per instructions. I have to treat it five times in a row after washing it. I therefore only wash it when really needed. A bit of dirt can easily be removed with a dampened sponge. I washed it three times till' now. Very expensive to waterproof along ownership and certainly something Fjällräven could improve on. I am not impressed about its water repellency.

Of course it works well in frosty snow, but so most jackets do, and on the way up or down, it's most needed to have a watertight jacket, also when passing dense clouds or soft snow and rain. Or on a long trail trip in the lowlands below 1000m.

I do sweat a bit in it, but side zippers are really good on ventilating, and I like the front main zip can also work from down up, so not a problem at all. Moreover, Fjällräven did something really smart I haven't had or seen on any other jacket so far, and it's the snap low on the front, which has its flap on the opposite side of normal, so that you don't have to undo the snap to work the main front zip. Really smart and usable!!!

The fit is super nice for mountaineering and other active outside doing. It is a tad warmer than I've tried before. It is loose in fit, so there is plenty of room for various layering underneath. The hood works well for a helmet or not, and is better than I've tried before. The strings to pull in front are a bit sloppy and not easy to work with when wearing gloves. They should be a bit bigger. The small "hammers" that are attatched to all zips are really good and so are the zippers themselves. I also like that the zippers are not super easy to pull up and down, so that they don't slide down by accident.

The Bergtagen Eco-shell material is super comfy and can stretch in all directions so the jacket never becomes a hindrance to any movement. Well done. It's a full 3-layer jacket in one layer as most are today, and after a couple of years, none of the taping inside have come undone.

The shell seems a bit sensitive to scratches or tears. I have one small hole in it and I took really good care while wearing it, despite being used to its intensions. The good point in this is, that wearing a small light Osprey, a medium light medium sized Bergtagen backpack or a big heavy one, doesn't show any extra wear on shoulders and works well, also with a climbing harness.

The two big zips on the sides are smarter places than any other jacket I have had. It makes it real easy to reach pockets in another layer behind the jacket. It doesn't have inside pockets and only two outside and I am fine with that. I don't wear an extra pair of thick gloves inside the jacket as it becomes too bulky.

Another really smart thing is the velcro on both arms, as it's sewn in behind and not on top of the outer material. So it doesn't rips and tears off and falls off like any other jacket I have had or seen.

Finally, this is by far the most silent hardshell jacket I've ever had or tried. It's just silent to wear and I really like that a lot over any other noisy jacket.

Would I buy it again? Sure. Would I recommend it? Yes, sure.

Works well for mountaineering and with a climbing harness in real life.
May wear a little fast.
Super silent and perfect zips and pulls.
Water repellency is so-so after two three washes, despite correct reproofing.