The Denali has been discontinued. It was replaced by the Gregory Denali Pro 105. 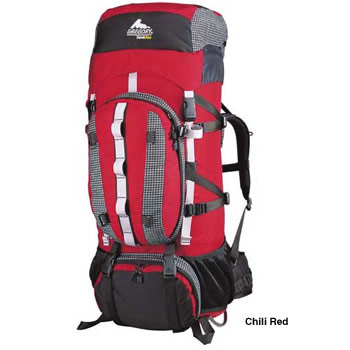 Great pack, good features, a few too many straps and doo-dads.

My only complaint, and please consider this when trying it on--the lumbar pad is thick and the back pad is curved so much that that nice looking padded panel doesn't even touch my back between the lumbar and top of my back. Since they are carbon-fiber stays they can't be re-shaped. Makes it a little wobbly. I regret to say I am selling this pack in search of something that hugs my back better.

Overall- AWESOME pack, just beware of the back curve. Now for the big debate- lower line Gregory (Shasta or Palisade) or Dana Terraplane?

Simply awesome, I have been waiting for this pack my entire life. Blows all other packs out of the water even Dana Design. Only for the most hardcore and experienced backpackers. I beleive I could pack my truck into this pack and it still be comfortable to carry. BUY IT!!!

I have owned a lot of backpacks but this one is the best in my opinion.

It has almost 7000 cu. inches and it will hold the kitchen sink. I have added two-extra side packets and now it has a total of 7 pockets. It fits like a glove, and with 50 lbs of gear on my back i'm still not fatigued after a week of climbing the AT. I got mine on sale for $300 but they retail for $450. If you're willing to spend that money, get it!!!

This is my second gregory pack. I originally had a robson, which i loved, but i needed something with a little more space (masochist, you say). the denali has two carbon fiber stays to cut some weight etc. for a pack that is somewhat heavy (7lbs. 11 oz.), but it is worth every ounce. the harness and waist belt are made from gregory's trademarked flo-form padding, which really can help out when you are carrying excessive loads.

an example of the pack's overall comfort can be summarized in a small story that happened to me last winter. myself and three of my friends were doings some late winter mountaineering last march. somewhere at higher altitude i developed AMS which started to turn into early stages of edema so i, and my gear, had to be carried down. a good friend of mine, who at the time swore by his lowe-alpine, carried my gear. we had argued for a long time about the pro's and con's of the two brands, but he would not listen. after he carried my gear down, the first thing that he did when we got back home was to sell his lowe and buy a gregory.