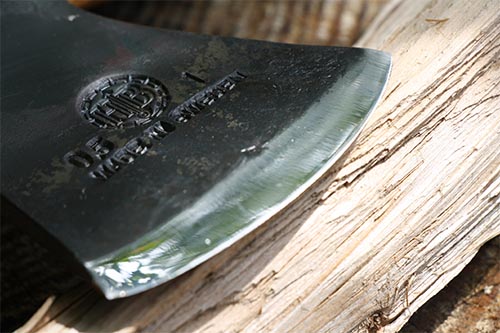 With a forge that has been in continual operation since 1697, Hults Bruk has the distinction of being the oldest axe manufacturer in the world. More than three hundred years into its existence, its blacksmiths continue to hand-forge premium axes in Sweden using timeless techniques. The result is a handcrafted tool that also will last for generations.

Dutchman Jacob Reenstierna founded Hults Bruk in Sweden in 1697. The company, using water-driven hammers, specialized in forging nails for shipbuilding. It soon expanded its offerings to metal sheets, anchor chains, and castings. In 1732, Brigitta Wallrave bought Hults Bruk and under her leadership added axes and spades to the increasing number of items produced.

In the 1870s a booming forest industry prompted Hults Bruk to narrow its offerings and specialize in axes, specifically based on American design and production. Until then, most axes were produced on a small scale by local foundries, but forestry companies and workers increased demand. Additionally, for years American axe designers had been tinkering with European axe designs to improve performance in hardwood forests. 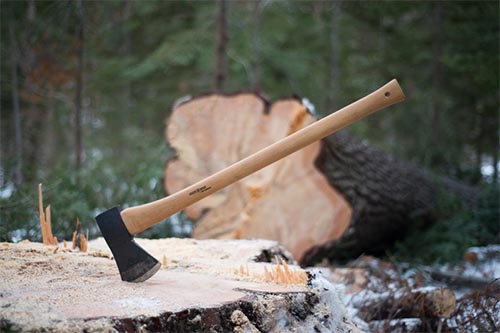 Modern axe design was evolving, and in 1887, Hults Bruk owner and ironmonger Gunnar Ekelund traveled to America to study New World axe production methods. He brought modern machinery back to Sweden and opened up a new market for Hults Bruk axes, with its first ones sold in the United States in the late 1880s. Ekelund's trip and research also influenced axe patterns at Hults Bruk.

For example: Below (No. 67) is an example of a European axe made by Hults Bruk in the late 1800s. It's narrow, without a poll on the back of the axe head and a collar where the handle meets the head. 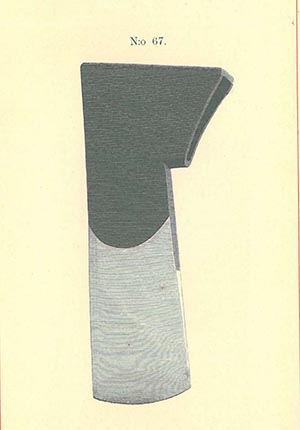 In comparison, below (No. 77) is a New World style of Hults Bruk axe from the same time period. This updated design is big, wide, and has a slab of steel at the poll. This style was carried into the next century and is still used by Hults Bruk today. 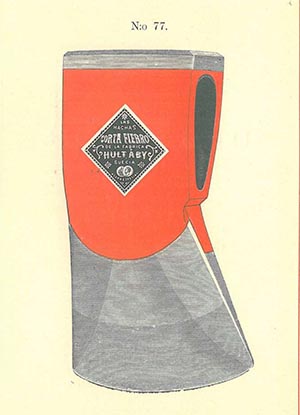 While the 1800s introduced major developments in modern axe design, other refinements continued in production. Hults Bruk was electrified in 1916-1917 increasing its power, and in the 1930s, Hults Bruk began developing more effective ways to forge a blade edge that would maintain sharpness over time and use. While aspects of production were mechanized, Hults Bruk found that axe heads forged by hand maintained the highest quality.

By 1946 the company produced more than 800,000 axes per year. However, a post-WWII economic boom increased demand for wood products, and chainsaws replaced human-powered saws and axes. Axe production slowed and patterns and designs decreased over the following decades.

In recent years though, interest in unique, heritage, hand-crafted products has grown and traditional hand forging, shaping, and grinding continues at the Hults Bruk forge today. 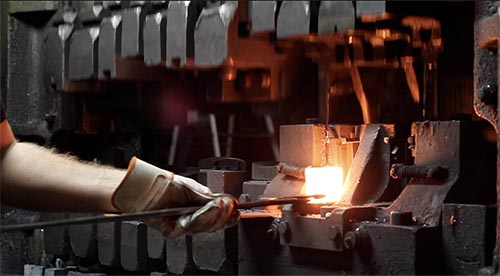 “There is a mystique about Swedish axes," says the company. "Maybe it's the Viking history or perhaps the fact that Scandinavians have a long history of making high-quality cutting tools like axes and knives.”

And at the Hults Bruk forge today, axes are created much the same as they were in the late 1800s.

Two blacksmiths work in tandem at an axe-forging machine to hand forge the steel axe heads. To hand-forging the axe head, one physically moves the hot steel billet through the press, timing movements with the machine. This allows the worker to oversee the shape of each axe and sense by hand if the shape is correct. Finished axe heads are stamped with the “HB” mark.

A hardening master heats and cools the axe head rapidly to ensure the edge remains strong and solid. Finally, American hickory wood, treated with linseed oil, is used for the handle.

Hults Bruk produces a premium and a standard line of axes. Premium axes are hand finished, meaning they are hand-ground and sharpened, and are left black from the forge. Their axes handles are narrower, hand sanded, and have extra coats of protective oil, with more hand finishing time. Standard axes are also hand-forged from Swedish steel but are sandblasted and lacquered and have thicker handles.

Axes made at Hults Bruk today are primarily variations of old American forestry patterns brought back to Sweden by Ekelund  in the mid-1800s. "Patterns like the Montreal, Turpentine, and Yankee are pure Americana," says the brand. Plus, the shapes of its axes are inherently unique and useful, not only for cutting trees but also carving and crafting.

With proper care, a Hults Bruk axe will last for generations—a functional and timeless piece of history. 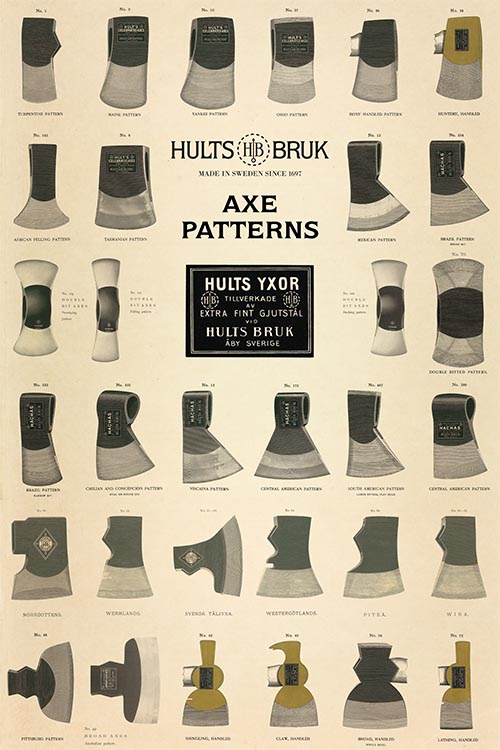 "You won't find these axe patterns in hardware stores,” says the brand of its offerings. With thousands of different axe patterns produced over its history, Hults Bruk maintains an archive of old catalogues and maker's marks to help collectors and other individuals identify vintage Hults Bruk axes and hatchets.

Hults Bruk has been sold numerous times over its three hundred plus years. Since 1992 it has been owned by the Hultafors Group. The flagship Hults Bruk brand is sold exclusively in North America. Hults Bruk also makes axes for the Hultafors brand.

In order to show you the most useful information, we have omitted some unreviewed products. View the complete Hults Bruk product list »

Hults Bruk In the News