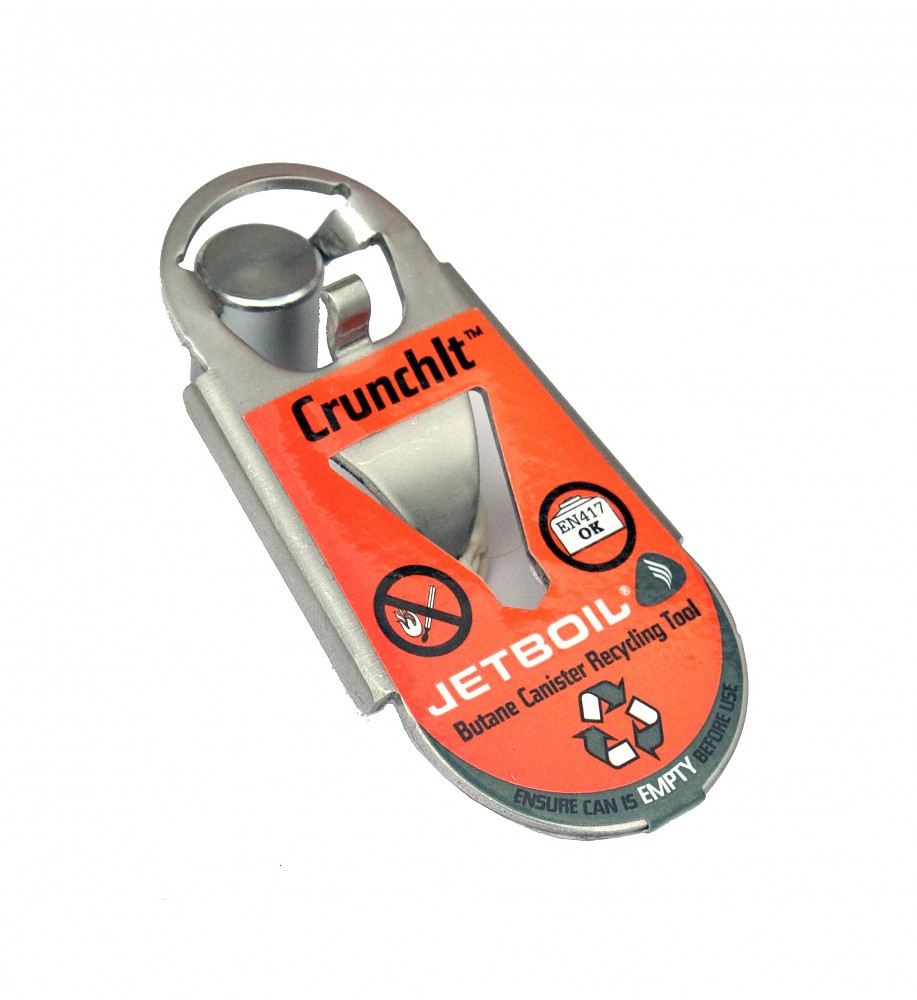 A straightforward tool for bleeding and puncturing gas canisters for safe disposal.

I try to completely use up and properly dispose of every gas canister that I purchase, but since they are not allowed on planes even in checked luggage, I have sometimes had to figure out what to do with a partially used canister before taking a flight home.

I am not the only one. At resupply points on the JMT in 2014 and at hostels and huts on our recent visit in Iceland, we came across stashes of partially used gas canisters, presumably left with the good intention that others could use them up. Some were more or less half-used, others mostly used up and therefore unlikely to be picked up, although I suppose people camping nearby might just use them on-site.

At any rate, at some point it may make sense to bleed out small amounts of remaining gas and punch the cans so that they can be safely disposed of and recycled, rather than letting them pile up for someone else to deal with. This is the tool for that job. 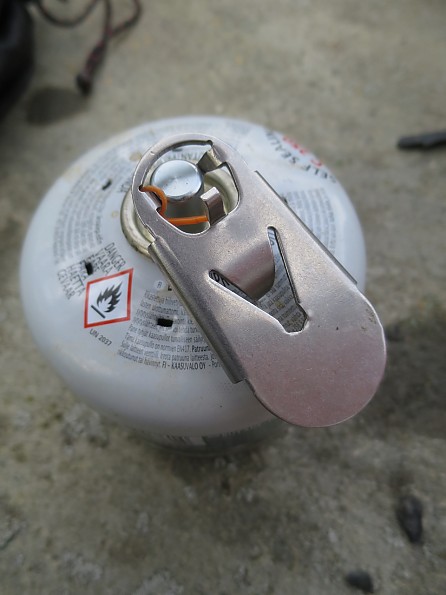 I agree with all that has been said in the previous two reviews. I just want to point out a few details. 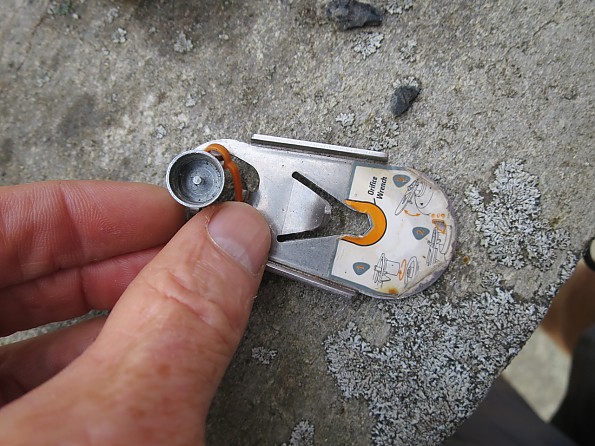 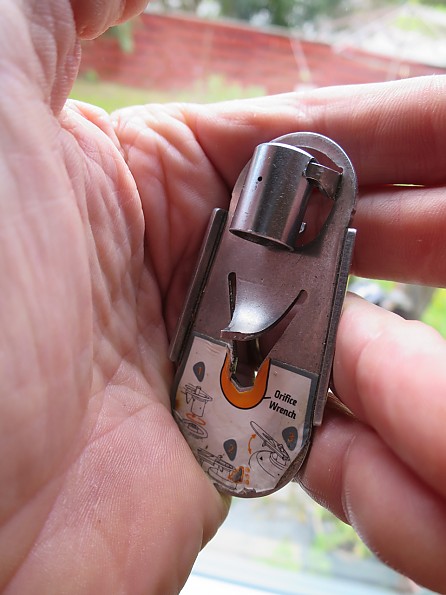 First, in addition to a pin that opens the valve on the canister the tool has a bleed hole for bleeding off excess gas, hopefully not much more than dregs and presumably to be done in an open environment. So although the instructions say to make sure the canister is completely empty, the tool does allow for venting of small amounts of gas.

Second, it can sometimes be difficult to thread the tool onto the canister, especially in cold conditions with gloves etc. You have to push down while twisting and keeping the tool straight on the threads, and the fine threads don’t always take right away. I usually hold the tool steady and twist the canister. The depth of the threads is only just enough for a full turn before it bottoms out.

As a matter of habit, I punch five or six holes all the way around so that it is obvious that the canister is safe, and the tool pops off after I have punched the last hole. This is a minor point, but I wonder if a small design change might make the Crunchit a bit easier to use.

It came with an attached plastic piece to cover the sharp point, but that didn't take too long too break and I just now cut the last little bit off. It resides in my cooking accessories bag and has not caused any damage even without the "point guard".

I assume the orifice wrench is specifically for field stripping Jetboil stoves. I have not had occasion to use it.

I have punched countless canisters with this tool over the last five years or so.

Whether you are a backpacker or a car camper you probably have a variety of empty or near empty fuel canisters stored at your home. The handy little CrunchIt tool by Jetboil is perfect for both removing the last of the gas and penetrating the canister so it can be safely put in your recycle bin. I personally had about five empty or near empty canisters so I figured it was time to remedy the problem.

The CrunchIt couldn't be simpler to operate. Remove the orange blade protector and then thread the tool onto the fuel canisters nozzle. A small pin in the center of the threaded part of the tool releases the gas from the canister. Once the gas has stopped hissing you can then push on the tool which will then penetrate the fuel canister much like a can opener. Twist the tool counter clockwise and puncture the canister two more times. Unthread the CrunchIt and you now have a fuel canister that is safe to recycle. It couldn't be easier. 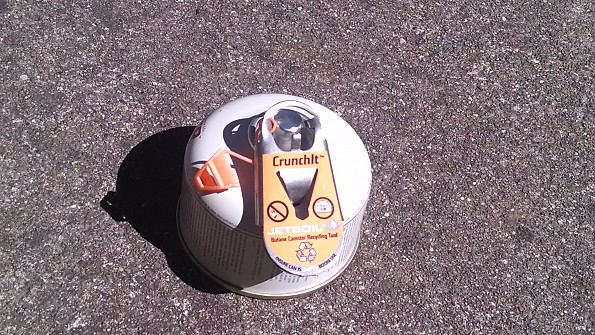 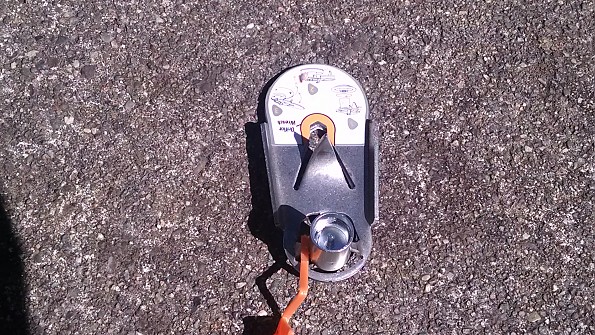 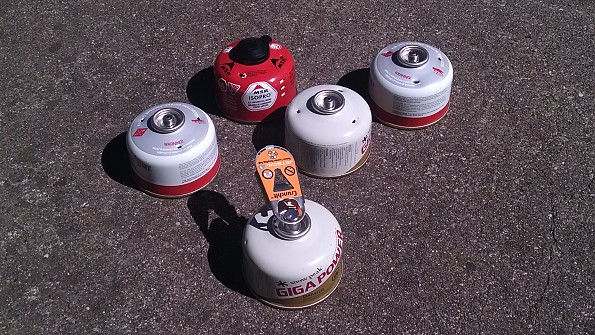 Everybody who uses a canister stove should have one of these great gadgets! It allows the empty fuel cans to be disposed of in the regular garbage.

I've used various methods over the years to punch holes in my exhausted iso/propane canisters, but this neato little tool from JetBoil makes the job quick, easy, and efficient. Being able to thread the collar onto the canister itself lets one do the job without having to stab or put out an undue amount of pressure.

This is handy when it's raining or snowy out, and is a bit safer than using a hunting knife.  Ask me how I know.

I'm always a popular guy at the end of group camping trips when I pull this out.  :) 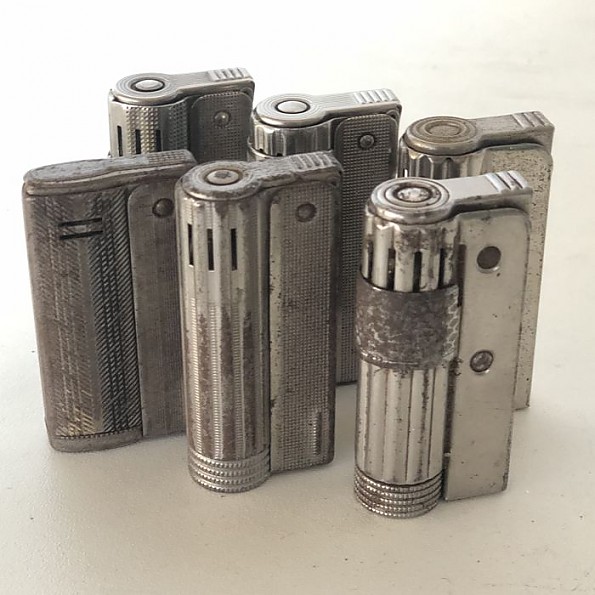