The Helios has been discontinued. It was replaced by the Jetboil Joule Group Cooking System. 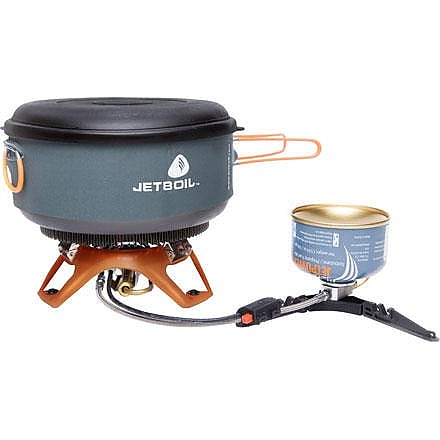 An easy-to-set up backcountry cooking system, but not perfect: this is a compromise between a full-function campstove and the high-speed waterboilers that are the other Jetboil stoves, and like all compromises, there are some definite limitations.

First off, a confession: I've owned this stove for all of a week, and used it on precisely one overnight camping trip. But I designed a menu and bought the stove in a coordinated manner to really test my backcountry cooking skills, so I think I've got a pretty good sense of what this stove is -- and is not -- capable of.

First, the strengths: this stove lights easily, gets water hot almost instantly, and brings it to a rolling boil incredibly quickly. And like all the Jetboil stoves, it does so with so little lost heat that the area around the pot remains cool. Unlike all the others, however, this one works with a wide, separate pot that sits on a burner that connects to the gas canister via a short braided-metal hose.

The pot stand part of the stove is plenty sturdy, and the pot plenty wide, with fold-out handles for holding on with one hand while you stir with another, so there's little worry of tipping things over. The control knob flips out so that it's easy to reach and turns easily, and there's a button for the piezo-electric lighter about half-way along the fuel line that seems to work fine so far, though of course, those things are notorious for not lasting, so I brought along a lighter just in case.

The down sides, however, are these:

First, my whole reason for getting this pot/stove combo was so I could cook really good food when taking my wife and youngest son camping. This meant more than instant-boil, heat-and-eat food: I made shrimp and grits the first meal, and had sausages for breakfast the following morning, with more grits to go along with the sausages. Can't do that in a PCS or even a GCS, so far as I could tell. And, honestly, it was a bit challenging in the Helios, too.

So after fiddling with it until I figured that out, I managed to get it to not full-out insta-boil long enough to get my grits cooked in the evening, but the sausages got boiled, because as soon as they started browning, they were burning. There was no in-between.

Second, related to the first: it is designed to boil water, fast, and it does. And it's also designed to do so very efficiently: 23 1-liter boils per fuel canister. I was cooking... two meals, plus warming a little water for an evening wash [that task took literally seconds] and making a couple of cups of tea. That's maybe running it five times the whole trip. And my canister is empty.

The simmering of the grits (five minutes) and the low-boiling of the sausages killed that canister. Now I know, and will plan accordingly, but be forewarned if, like me, you're getting this because you like the Jetboil efficiency, but also want to cook. It has Jetboil efficiency, and it can, when pressed, cook: but it can't do both.

My only other concern is with durability. The fuel line and stove looks good, but the pot, lid, and stove stand have issues of concern. The actual burner clips into the stove stand, and they don't quite fit, somehow. You have to disassemble it to put it away, and the clip that holds it together doesn't quite fit the notch in the stand, and I'm already starting to see some wear. I may take a small file to it to lengthen the notch, but only if I can convince myself I can do it without loosening the stove once it's assembled.

The issue with the pot is with the heat transfer manifold. It's the thing that makes this stove -- and all Jetboils -- the miracle it is, but it needs to be pampered. At the picnic table in my beachfront campsite, no problem. In the real backcountry with my older son and I this fall? That remains to be seen. And finally, the stove packs with a plastic cover at the bottom (Make sure you take that off BEFORE you put the pot on the stove!) and another for the top, which you invert to serve as a lid while cooking. Except it warps in the heat. Again, if you're just boiling water, then turning it off, it's not long enough to be a problem. But the grits really twisted the lid. It twisted back when it cooled, but how long can that go on?

So it boils great, and cooks okay. Of course, once you've boiled the water, you have to get it out -- and the pot is basically a wide sauce pan, making pouring actually a bit tricky. I brought along a small coffee percolator, and poured from the pot to the percolator and then to cups, but that seems a bit extravagant when weight really counts. In the morning, I decided to try boiling directly in the coffee pot (one of the advantages of the Helios is that you can use any pot with it, though you need to remove the wind shield) to see if it was worth leaving the Helios behind for light packing -- but that's when I discovered I was out of fuel.

In summary, am I glad I bought it? Well, sure, I mean, shrimp and grits in the backcountry! Will it be my only stove? I doubt it. And maybe not even my primary go-to for real wilderness treking.

Okay, after some more uses: one of the key things about Jetboils is that the outside stays cool because heat transfer is so efficient. So every one is wrapped in neoprene. Which, on a trip last spring, caught fire, despite the stove being properly set up and in good working order.

I contacted Jetboil, and was asked to send it back for investigation. After several weeks, it was returned to me with a new neoprene cover. But since I still don't know why it caught fire, and they don't seem to have any insights, I'm not likely to take it out with me again.

I'll also note that this particular stove seems to have been discontinued. I'm definitely looking for a replacement at this point.

The Helios is one amazing water boiler. Two cups of water from icy cold to boiling in less than 90 seconds. Incredible! Been using my Helios for about six months now and I still love it as much as I did when I first got it. Actually, that's a lie. I like it MORE.

Ever since I found out that one of the 450 gram canisters lasts for more than a month with almost twice daily daily use I've been in awe of the the thing. It can even cook!... If you are dexterous enough to turn the fuel knob to almost just-about-off without shutting it off completely. The stove is so dang efficient that a tiny little flame about the size of a butane "jet" lighter flame is enough to fry fish or chicken breasts. Wickedness!

If you're planning on eating out of the pot, put the plastic protector on the bottom. The heat absorption fins don't just channel all the heat from the flame into the water you're boiling or the food you're cooking, it also channels all of the heat out of your food back into the air once you turn off the stove. Not a prob, just put the plastic bottom on when done cooking.

While using the fuel tank upside-down because it's below freezing the stove has one and one setting only: Full blast!

The 8" BakePacker backpacker oven fits inside the Helios pot with only a little persuasion.

The Helios makes the most amazing cupcakes, muffins, cake-cakes, and corn breads. On the trail!

All in all, the most efficient, versatile stove I've ever used in 25 years of camping.