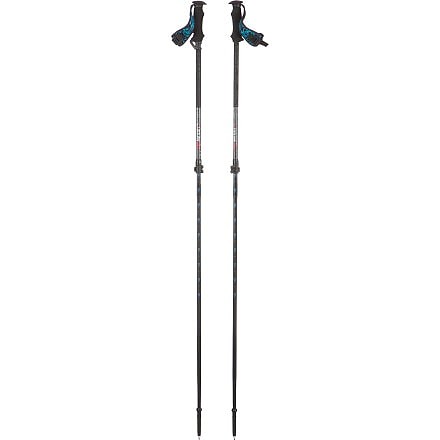 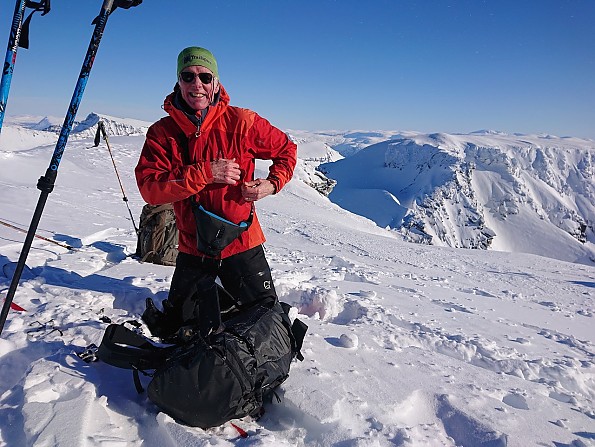 For a time, I didn't use telescoping poles for backcountry skiing. Some of my friends had them and it didn’t take rocket science to observe that they had a few problems. Sometimes they’d ask me to hold on to one end while they twisted or reefed on the other, trying to free a frozen twistlock or extend a pole with an ever so slightly bent shaft. Or the twistlock would slip so that the pole collapsed on a critical pole plant, resulting in a nasty or maybe just hilarious crash. Who needs that?

And, at least in proportion to my budget in those years, they cost a lot of money, three or four times what a cheap pair of fiberglass xc poles, which is what I used. A slice of old sleeping pad, a length of webbing, a generous application of duct tape and you’ve got yourself a second grip, complete with wrist strap, lower down on the shaft for descents and steep sidehills. The upper bit was good for whacking fir branches out of the way in the Vermont woods. After I broke a few of those, I graduated to pricier, extra sturdy fiberglass poles with big powder baskets, still with those homemade extra grips. The shafts held up well for a few years at a time, but eventually they’d get levered between trees or eaten by crust, and the same crust would shred those nice powder baskets.

So about the time cam locks started to replace twist locks, coinciding with my move to Norway, telescoping poles started to make sense. My first pair were all metal, not too expensive and with reliable cam locks, but it didn’t take too long to just slightly bend one of the lower shafts, so that shortening and extending the pole became a hassle at first, and eventually, with a little more bending, impossible. The all-carbon poles cost more than I cared to pay, especially knowing that when carbon fails, it does so catastrophically.

So, when I spotted a pair of the K2 Lockjaws at a reduced price at a ski shop downtown, I checked them out and bought them on a spot. Based on when they appear in my photos, that was in early 2012, so they have served me reliably for seven backcountry seasons (eight minus the one I winter spent in Arizona doing desert things). As mainly a weekend warrior, I do maybe a dozen summits a season, plus the occasional liftserv day and some hut-to-hut tours. Then just a few days ago, one of them broke. I’ll explain in a minute.

Note that the Lockjaw carbon/alu pole, now called Lockjaw Carbon,  has undergone at least one upgrade in the intervening years, and K2 has introduced an all-carbon version (Lockjaw Carbon Plus), but most of the core features I will describe have been preserved or in some cases improved along the way, so hopefully this review still applies. K2 also makes an all aluminum version, the Lockjaw Aluminum/EVA.

As the name implies, the upper shaft is aluminum, the lower carbon fiber. The pole telescopes from 105 cm to 145 cm. That upper limit is a little too short for my taste, because my normal length for xc skiing is 155 cm. In most backcountry skiing that doesn’t matter so much, but can be nice when ingress and egress involves skiing on groomed xc ski trails or hard-packed roads, when some xc technique can save energy. I'd appreciate even another 5 cm.

The lengths are marked off in centimeters only, numbered every 5 cm and with halfway marks to give 2.5 cm (ca. 1 inch) increments. All the markings are worn but still legible after seven seasons of use. The shafts still collapse and extend smoothly, and in that regard have held up better than any other ski or trekking pole in my family quiver. The key is that carbon, unlike metal, will not bend irreversibly, although it does have very a stiff flex, and since bends are more likely to occur in the narrower lower pole shaft, the bending that can freeze up an all metal pole is avoided—the hybrid design works.

My pair weighs just under 600 grams. The carbon lower shaft gives a lower swing weight than all-metal poles, which is noticeable mainly when going back to older poles. It’s one of those little things that help improve efficiency in movement, saving up energy throughout the day. 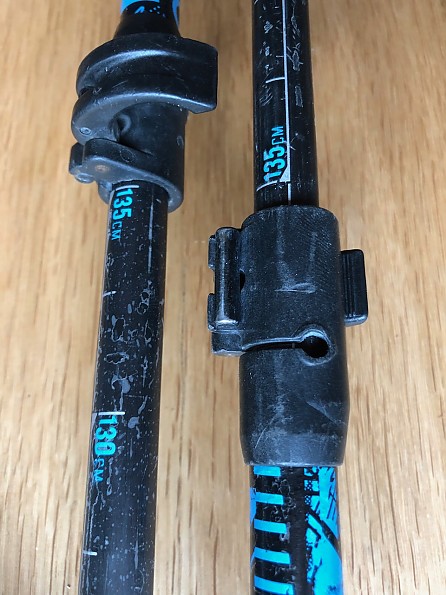 The cam locks are reliable and easy to operate, often while on the move, even with my warmest mittens. 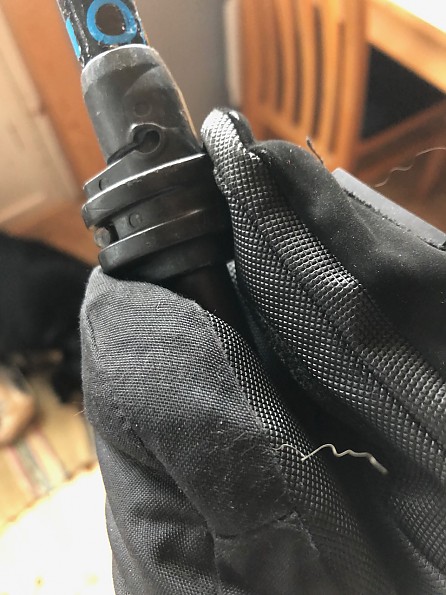 They are made of molded plastic with a couple of small metal parts for the tension adjustment. The tension can be adjusted without tools via a fine-threaded T-fitting, but I don’t think I have ever had to adjust it. 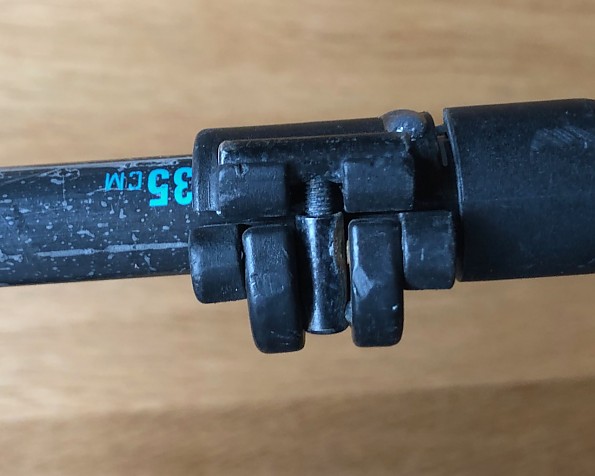 The poles have locked and released reliably throughout their career so far. I have never experienced any slippage. 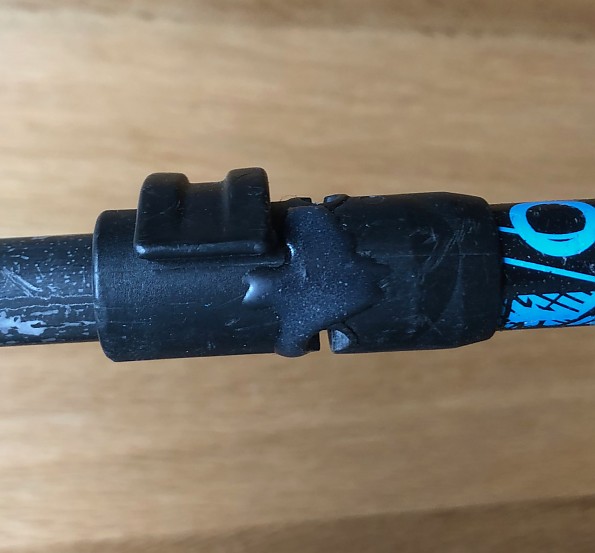 The locking sleeve, as I recently discovered, is vulnerable to breakage. The upper part is more less permanently attached to the shaft. Below that, the fitting is slotted about ¾ of the way around to allow the lower part enough flexibility to tightly clamp the lower shaft. On one pole, the remaining ¼ broke through so that the lower shaft slipped free with the lower part of the mechanism attached. I had to finish my day with one pole (always good practice). I think the part may have been fatigued by repeated flexing; I sometimes grip a pole midshaft and lay it across the snow for some leverage after a fall in deep snow.

The final break occurred as I was using the pole to whack my boots to clean off snow before inserting them in the binding. I would consider both of these actions as normal use. I made a brief search online to see if I could get a replacement part, but it looks like I would have to make a direct request to K2. In the meantime, I have repaired it with epoxy in and on the joint, and the repair seems quite solid, so maybe it will hold for a few more seasons. According to K2, the upgraded mechanism is now made of aluminum and so presumably less vulnerable. 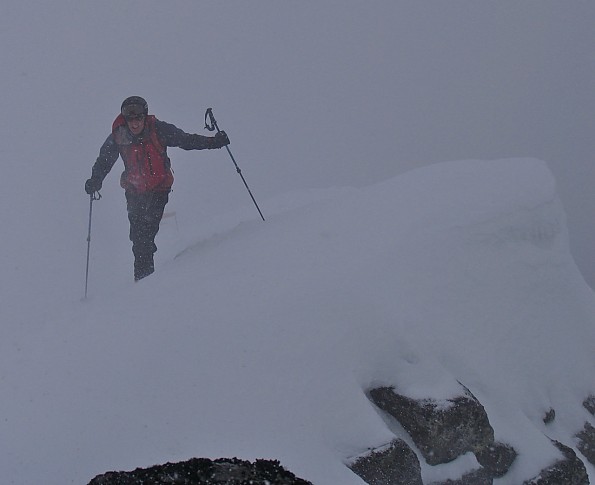 In the newer editions, K2 has added a second molded foam grip below the main grip for taking a choke grip lower on the pole on traverses. This is something I really miss because I choke down on my poles routinely. It would, however, cover the depth probe markings, which accordingly seems to have been left out on the newer poles. 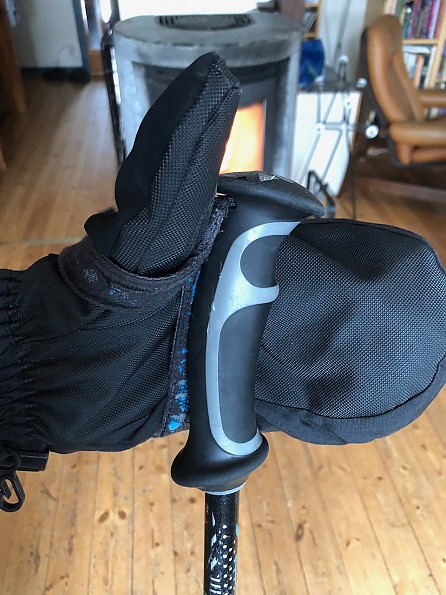 The molded plastic/rubber grips are slightly curved and fit comfortably in the hand, and the slightly sticky rubber helps give a firm grip, with ridges under index finger and palm to limit slippage. A “shelf” on the top of grip can be used for a top grip for a little extra extension. 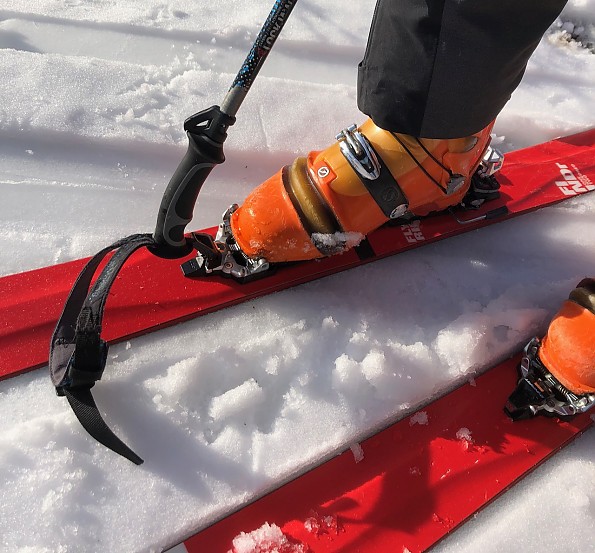 A slight hook on the shelf at the top of the grip can be used to lock tech binding toe pieces, flip over heel lifts for climbing, or open boot buckles. The first two functions I usually do with the pole basket, and the latter with my hands, so I haven used this feature much. 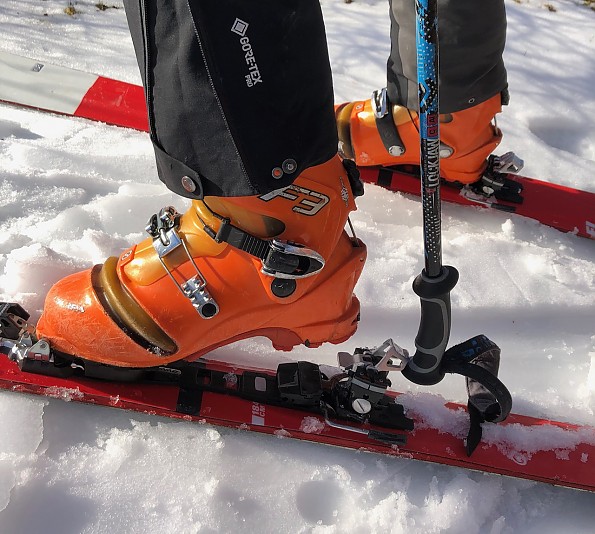 Like the rest of the pole, the grips have tolerated thousands of meters of climbing and descent and hundreds of kilometers or touring without any visible wear and tear. 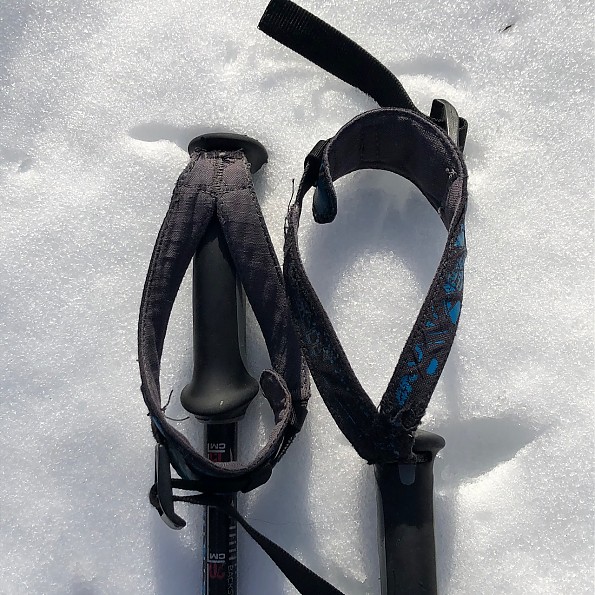 The two-layer sewn nylon straps are broad enough to be comfortable on bare hands. They hang in an open loop, making it easy to find and put them on while on the move. They adjust via a nylon strap and a friction buckle over a range that accommodates everything from my bare hands to my biggest mittens. No noticeable wear and tear over the seven seasons. 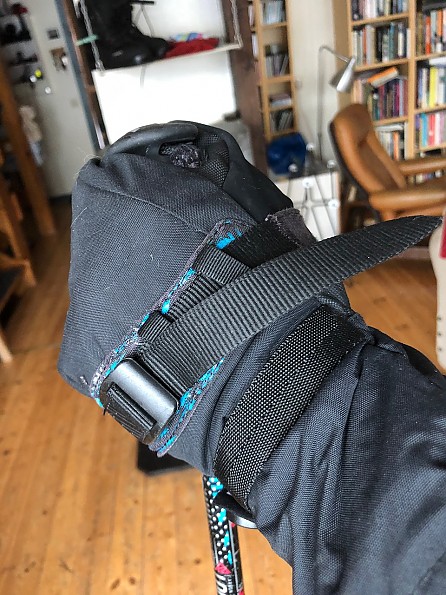 The ferrule is carbide tipped and is of a standard type with a threaded section that helps with removing and replacing baskets. I have not used the poles at all for trekking, but usually take my poles with me on the rocky final boot ascent to a summit, so they have seen a few rocks. The carbide tips barely seem worn. 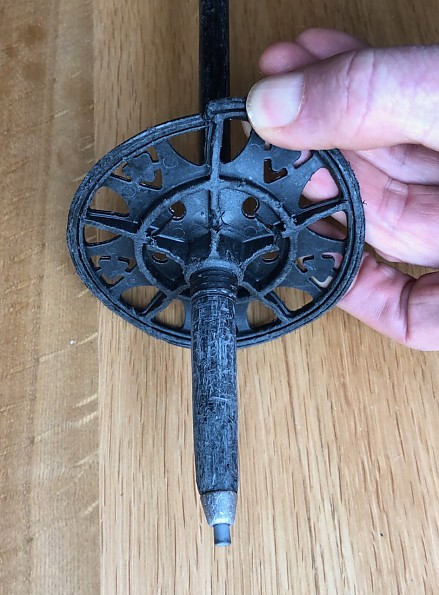 The baskets seem to have held up well but on inspection one basket has cracked through in a couple places on the outer and inner rings, but os still doing the job. Replacement may be in order after another season or two. The baskets have some flexibility but can cause the pole tips to kick out on icy snow. On the Carbon Plus, K2 has introduced a two-component basket that promises more flexibility.

Depth gauge: The upper shaft of the left pole can is marked off in 5 cm increments for use as a rough depth gauge for snow depths from 15 to 50 cm, activated by inverting the pole and pushing it grip first into the snow. This can come in handy for finding and measuring depth to hard layers in the snow pack in a first assessment of avalanche potential.

Inclinometer: The right pole has a bubble inclinometer under the grip, marked off in 1˚ increments from 29 to 46˚, used by laying the pole tip-up on the slope. The bubble rests at 29˚ at lower angles. The scale is rather small and the bubble can be a bit hard to see in bright light and with sunglasses, but with some scrutiny the pole can be used to detect how far a local slope is above the critical avalanche level of 30˚ or, I suppose, if it’s above 45˚C, a few degrees above my usual upper limit. 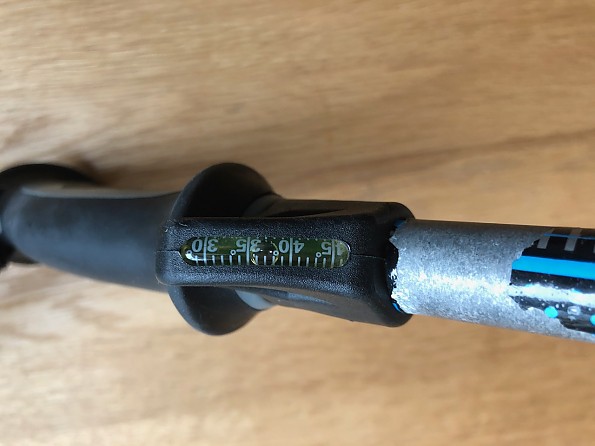 Avalanche probe: With at least one basket removed and the plastic inserts removed, the lower shafts can be screwed together and used as a ca. 2m avalanche probe. In a recent test, the plastic insert in the female shaft end took a little persuading to come loose, perhaps due to an accumulation of oxidized aluminum powder in that area. This and basket removal is something I don’t want to have to deal with in an avalanche situation, so I always carry a 2.5 m avalanche probe when venturing into the mountains. The conversion is fully functional and usable, preferably as a spare or backup, in an emergency. 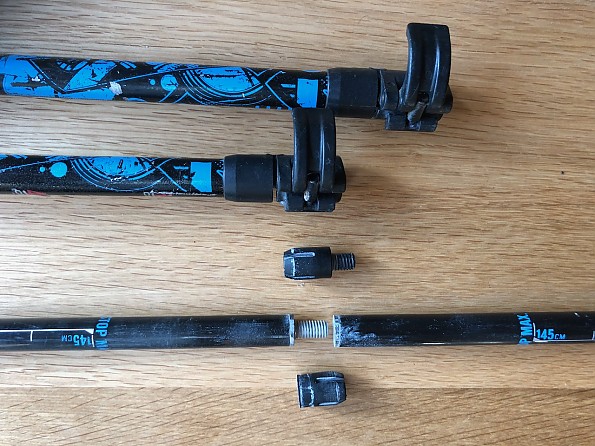 The broken camlock aside, my experience with these poles has given me a lot of faith in K2’s design and build. In the event my repair doesn’t hold, I would happily buy a pair of the upgraded alu/carbon version, with an improved and presumably more durable camlock and foam grips for lower hand positions. I am less certain about committing to the all carbon version, mainly because of the high price. These poles are best reserved for backcountry and sidecountry skiing where the length adjustment helps with efficient movement in approaches and skinning. They aren’t really intended for trekking, for which there are better options such as three-section or folding poles. 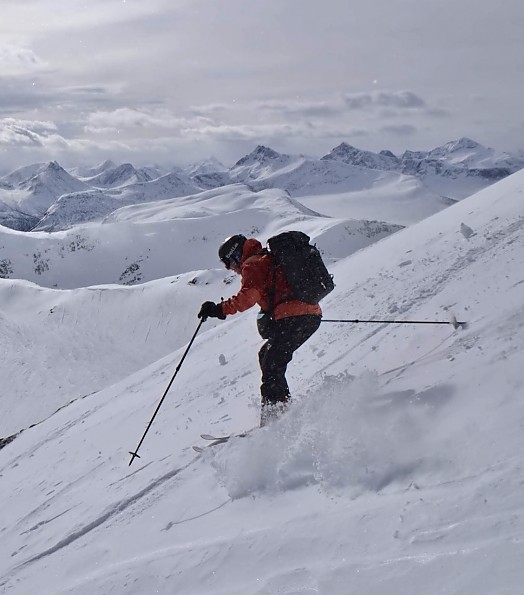 Coming up on 40 seasons of backcountry skiing, seven using these poles. 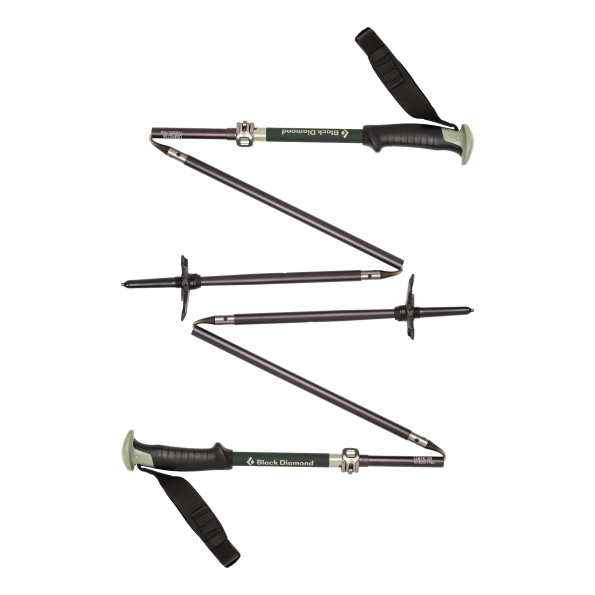 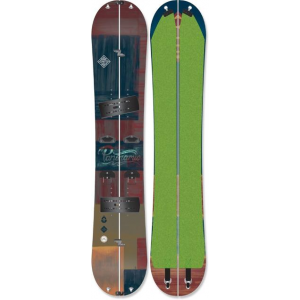