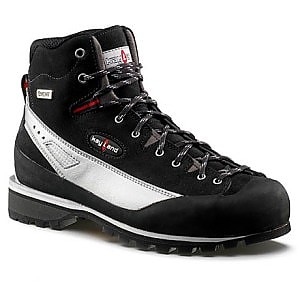 This boot feels and looks great in the store. I had some significant challenges after I bought it - some I could overcome, some I could not.

In terms of fit, you should know that the boot is narrower than it first feels. I found my toes were pretty cramped on hikes. Some of the cramping was undoubtedly exacerbated by a custom foot bed I added to the front part of the boot to moderate the slope of the heel, which is significantly taller than the footbed. That caused crippling pressure on my arches, until I raised the front of the footbed to match. It took my 4-5 hikes to get to a point where I didn't carry a spare pair of other boots.

I found that the sole - in particular, the climbing zone at the front of the sole - wore out quickly. In fact, a couple of months after buying my pair, I had to return it to be resoled because the sole was also separating from the rand at the front. I had done some tough hiking in it, but not really all that many miles. That was disappointing.

I also had issues with moisture. This was my first experience with eVent, and it did not appear to be nearly as breathable as Gore Tex. Once the boot gets wet, it stays wet for a very long time. My feet sweated worse than in Gore Tex boots I've worn.

I was also surprised by how quickly the shoelace grommets started to rust. Within the first couple of months, all the grommets were already rusted. Still usable, but doesn't bode well for the longevity of the boot.

I loved the red color, I loved the easy compatibility with hybrid crampons; but I wouldn't recommend it as a rugged, long-term boot or for people with wide feet or low arches.

Use: A mix of short and aggressive day hikes.

Great flex-rigidity ratio, fine room in the toe box, as light or lighter than my Sportivas, comfortable for 8-12 miles in the Rockies or the Grand Canyon.

No break-in needed, no rubbing or tight/hot spots. Way comfortable, no tired feet.

Walked through Grand Canyon sand and Rocky Mountain slush and deep cold snow, no problem with leakage of any kind..

The platform and ankle support are superior to La Sportiva Trango..

I replaced the top 2 eyelets with speed hooks at Perry'as Boot Repair...well worth the extra $36.

My hikes are generally 8-12 miles over rough terrain, have used them weekly x 4 weeks...so far, so good...time will tell about durability.

=> I bought these at Neptune Mountaineering in Boulder on sale as discontinued item @ about $125, a great buy...I'd love to have another pair on deck for the 5 year replacement cycle!

I tried on several different boots and have very difficult feet to fit. My feet are wide, with a high arch and large instep.

When I tried on the MXT's I was instantly in love so I ordered a pair on sale at Boulder Mountaineering. I was really excited to get them in the mountains until my wife noticed a faulty seam. I notified Boulder Mountaineering, and they were great. They called the Kayland Rep, who drop shipped a pair even before they received the returned pair.

Last weekend I took them on a 16 mile hike in "mixed terrain" (MXT) and they performed very well. I am considering ordering more for back-up.

Great boot, very similar to La Sportiva Trango S and Scarpa Carmoz. Of the three it would seem the MXT is built with the most durable materials. Not as light as the La Sportiva's but lighter than the Scarpa's. Out of the box they are ready to go IF they fit. The heel is narrow with a medium width at the ball of the foot. Great lacing system that works, no fancy knots needed here. eVENT lining breathes better than any WPB I have tried. Worth a look.

Bought these boots for aid climbing and mountaineering.

The performance for actual mountaineering is yet to be tested, but I used the boots for two days while hiking at Alps in Austria. After the trip, I noticed that the side of my big toe had gone numb, apparently permanently. I think it was caused by a small edge inside the boot that after pressing repeatedly against the toe damaged it. I suppose you could file the edge a bit, put some filling there, or something.

On the positive side, I've used the boots for aid climbing and been very satisfied. As you don't walk around much when climbing, the toe doesn't suffer much. For this use, the boots are really great. For via ferrata, the soles may be too hard, especially on metal rungs, and the boot doesn't smear very well. Edging is of course much better than with hiking boots, though I can't say that it's great, as the ankle support doesn't extend as high as it does with some mountaineering / ice climbing boots. I have also tried the boot for ice climbing a bit. It's not really optimal for that as the sole is not hard enough and the tip bends a bit, which makes front-pointing a pain, but you can get through.

As the boot doesn't have any special locking mechanism for the laces and as they are round and therefore rather slippery, you need to use proper lock lacing.

I don't like the red color. The old version and the women's version are more decent colors.

Had to buy a bit bigger shoe than I normally buy.

No matter how great boots are otherwise, permanent nerve damage gives them zero stars. If it wasn't for that problem, the boot would be 4-5 stars for its multi-purpose use for mixed hiking and climbing.