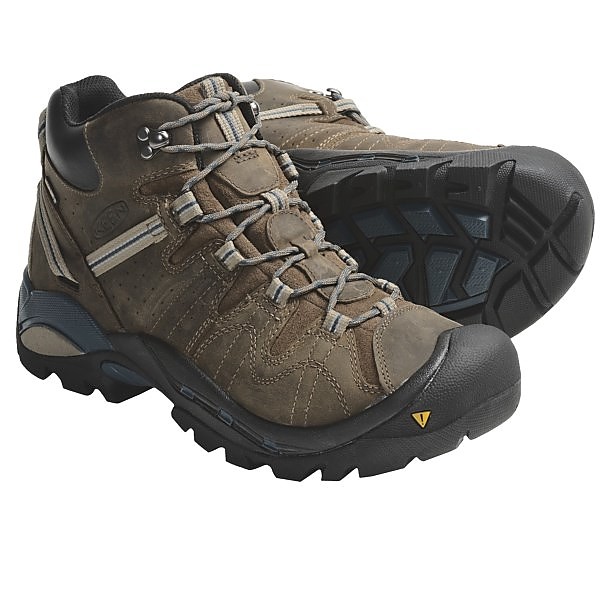 I've owned the Keen Klamath for most of this New York City winter season (2012/13) and they've performed like champions. I'd originally bought them for hiking the Catskills, but after a bit of a break-in (a week?) I found that they were perfect for the cold, wet weather we'd been having. They are not, however, really meant for city walking.

As for the break-in, I found that the proprietary waterproof membrane they use, Keen-Dry, gathers at the place where the shoe and tongue meet. It had caused me some discomfort during that first week. I found, though, that tightening the laces below the gathers, adding an extra turn to the laces, going through the next eye loosely, and then adding an extra twist at the last eye alleviated some of the pressure. Unfortunately, it disables one of the features of the boot: The second eye is part of a system that draws the upper part of the back of the ankle closer to your Achilles' tendon, supposedly providing a closer fit. I don't think I miss it.

I normally wear a 9.5. I'd heard talk of going a half size up with Keen's, so I did. And glad for it. The tens do allow just a bit of extra room for a pair of thicker socks, though I haven't really had the need for all that, yet.

We'd gotten a pretty good snow a few weeks ago, maybe ten inches. I put on my boots, and then a pair of gaiters. The gaiters fit fine. And then I went out and played. The boots performed as they had been all along. The boots kept the wet and cold out, and held pretty good traction.

Spoiler alert: If it's waterproof, it's not going to be 'breathable' enough to transfer sweat under hard hiking conditions. Your feet will get wet with your own perspiration. That's why you get waterproof AND insulated, not one or the other, even in a warm weather hiker. You want your feet to be able to dry easily in warmer weather. A waterproof, warm weather boot traps moisture inside. So, if you dunk your foot in a waterproof boot, they remain wet. Dunk your foot in a non-waterproof boot and they'll dry as you walk. I digress.

The next test was the real one: Harriman State Park, north of NYC. I'd picked out a six-mile loop to the Dutch Doctor shelter and back. The weather: 23°, gusts to 35 mph, mostly sunny. The trails were choked with ice and hard-packed snow. Perfect. I had to pull on my Hillsound Trail Crampons. I'd tested them for fit, but never in real-world conditions. Then I found the real beauty of these boots: almost zero twist.

The trails were not only covered in this stuff, but had been hiked on so many times, it was like walking on a pile of ice cubes that had partially melted and frozen together again. The sturdy sole of Klamath helped me avoid constantly having to check my balance, and the ankle support was ample and secure. Now, I did add in the 'cons' that they're heavy. There are lighter options that offer waterproof insulation.

Again, through a 6-hour, six-mile hike on icy trails, champions.

So, if you're looking for a traditional, thick-boned, meaty hiking boot for the colder temps, you found it. Keen's quality is legendary, and these live up to the name.