The Grand Teton 2.0 has been discontinued. If you're looking for something new, check out the best three-season tents for 2020. 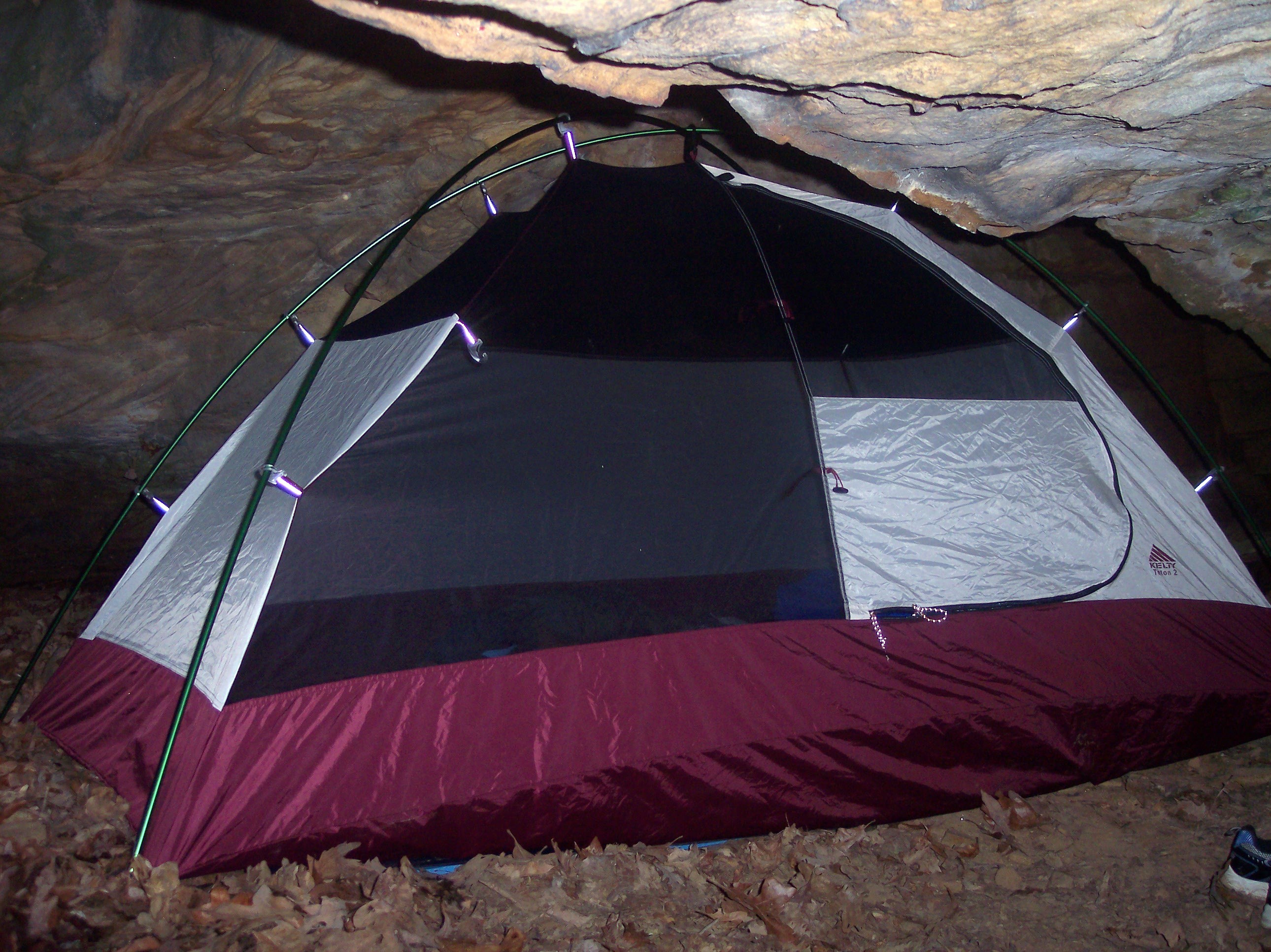 The Kelty Grand Teton 2 is a decent backpacking tent with a small vestibule and narrow width. Billed as a "two-person" tent, I can only advise that you be very close with the person you are sharing this tent.

These days, I exclusively use a hammock in the outdoors. For several years previously, I carried and used the Grand Teton II, a Christmas present from my in-laws. At the time, this tent retailed for $125.

I have used it in all three seasons, and even into mild winters. I have slept in this tent in steady, soaking drizzles and raging downpours. I have always remained nice and dry. While I would prefer more ventilation (which would lighten the weight), condensation has never been a problem. 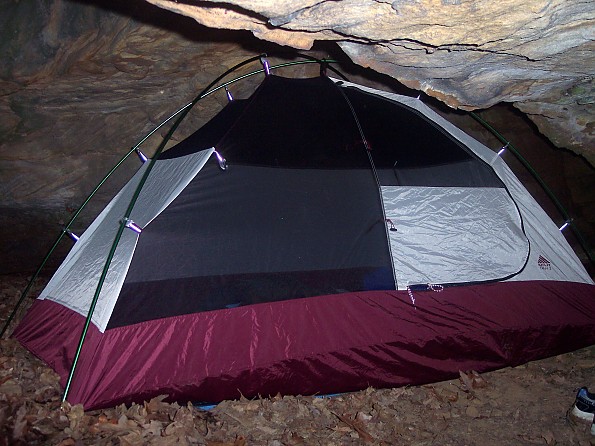 Plenty of opportunity to increase screening on this heavy tent.

At 4lb 2oz, the Grand Tenton II is heavier than many two man tents. In fact, it is heavier than its successor the Kelty Grand Mesa (which is both lighter and bigger). In terms of size, the 88" length is plenty long for my 6'2" frame. The width, however, is a mere 54", room for an adult and child, but cozy for two adults. 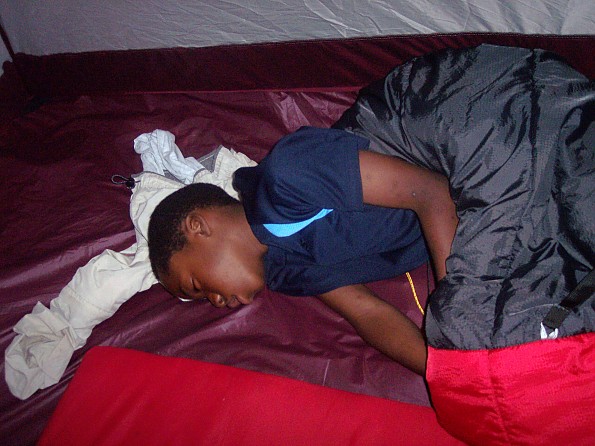 My tent mate. He's still young enough not to understand
why the old man needs a hammock for his back.

Set up is standard to this type of tent, simple and easy. With the footprint (not included), it pitches tautly enough that I don't need stakes, except in high winds. It packs down to roughly the size of two Nalgene bottles laid end-to-end.

The vestibule is way too small. I can put my shoes and a few items in it, but there is no room for my pack. When I am solo, I bring my pack into the tent and put my feet on top of it (nice trick when you're using a short sleeping pad in cold temps). However, when I am sharing this tent, gear remains outside in the weather. 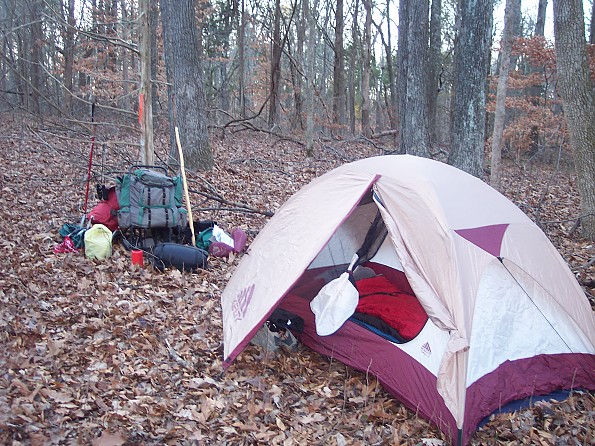 Note the shoes and rain gear tucked in the vestibule,
while everything else is out (though better organized
before bed). 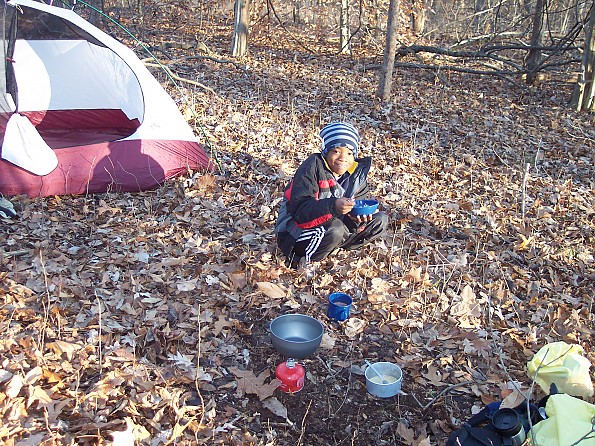 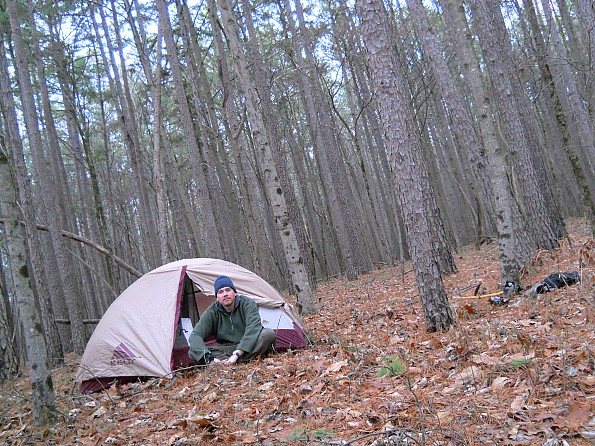 In Conclusion: This is not a tent I would urge anyone to go out and buy. Then again, this is not a tent I would warn you not to buy if you found it on the clearance shelf of a retailer (although as of October 2014, you can still find this tent listed on the web—now at a ridiculous $200). I still have it, and I still plan to use it for those trips when hammock camping is impractical.

Source: received it as a personal gift
Price Paid: $125

I have a Kelty tent as well, just different model whose name escapes me now. Goose, your review is great!

Great review Goose...but I think your tent-mate has rolled off his pad:-) For 125.00 that is a lot of tent...200.00 sounds about right for this size and design of the tent (similar to the REI 1/2 Dome...which is a fine tent for the price)...but the fact that the rain-fly on the Grand Teton 2 doesn't have any vents makes me squeamish.

Extremely easy to set-up! Could do it with my eyes closed. The tent is a two-person, but is very snug. It's a bit heavy for backpacking, but really good quality and the two vestibules make it comfortable for getting in and out easily.