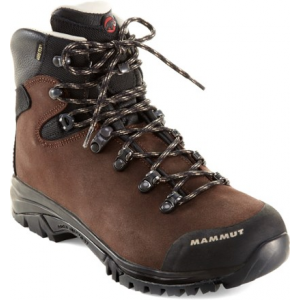 Soles coming off boots after very little use.

I thought I had finally found a replacement for my beloved Raichles from years ago when I bought these from REI around 2008-2009. The salesman told me these were made by Raichle, although the REI brand seems to be the only one on the boot.

These were to be my -serious- hiking boots, for when I had the time and was in the country for multiday backpacking trips. I wore them on short hikes and a couple of overnighters, enough to make sure they were broken in and to test the GoreTex waterproofing, but otherwise kept them at home. I cleaned and dried them after every hike and did not leave them out in the sun.

Come to find out, once I was in hiking country and ready to really put them to use, the soles were coming off. I took them back to REI to see if they would fix them and the customer service person told me "Eh, all boots delaminate after a while." He did offer to put the purchase price towards REI stuff, but I just wanted the soles reattached, and this they would not do.

It seems that Mammut bought Raichle some time ago. I called Mammut the next day. They not only refused to do anything about the boots, they backdated the time they said I must have had the boots by at least another two years. Mammut said they hadn't sold REI branded boots for at least 10 years. Either they were not being truthful or REI had sold me boots that were at least two years old in the store and that they later said they knew would fail from age. Mammut's customer service person was utterly unconcerned that I had been stuck with a pair of boots I could not use.

REI's little-girl-voiced customer service person at their main number had an even worse attitude. She just kept repeating that she could recommend "a cobbler" to fix the boots but of course at my expense and couldn't have cared less that REI would lose a customer over this. REI also would not post the negative review of these boots I wrote on their customer website.

For some time REI has been morphing into a fashion store for the affluent who want to look outdoorsy—MEC in Canada is far more like REI used to be—so their attitude wasn't wholly unexpected.

But for Raichle to end like this is a very sad finish to a once magnificent company.

UPDATE 1/18/16:  Can't reply to directly to Allcia's question using this page, but the answer is no. I've returned the boots to REI for a refund of the discounted price, after finding out they probably can't be fixed. Given the price increase over the years in addition, this wasn't nearly enough to replace the boots.

However, another REI salesperson told me this weekend REI's policy is to replace a product as closely as possible regardless of discounts given at the time, so it looks like I'll have a new pair if I want them or something equivalent if I don't. Major kudos to REI for the second salesperson (still don't know why the first one, and REI's call center, responded as they did).

UPDATE REDUX AND FINALE:  Should've known it was too good to be true. The REI saleswoman in Asheville, NC, backtracked today. All the store will allow me towards the cost of replacement is the original price, which was a special + member discount.  Not nearly enough to allow me to replace these for the hikes I'd planned this winter.  I'm so done with REI.

(anyone want a secondhand reservation on a ridgetop in the Smokies?)

Source: bought it new (I know there was a discount applied but can't find the actual receipt.)
Price Paid: List was over $200, don't have receipt for actual amount.

Always loved my Raichle boots over the last 30 years. They sold to Mammut a few years ago.

I thought I would never see Raichles again...until I went to REI and tried these on. Lifted the tongue of the boot, and there was a Raichle logo!

I was home again! Boot fit like a glove, wore them out of the store, around for the next few days. Comfortable and supportive... Not one problem.

The tongue clip is perfect. The lace hooks hold the laces tight.

They got a little soft and lost some support. Were not as waterproof as they used to be. But were a very good boot the first 5 years or so.

This Mammut boot is identical with some improvements to my last Raichle pair.