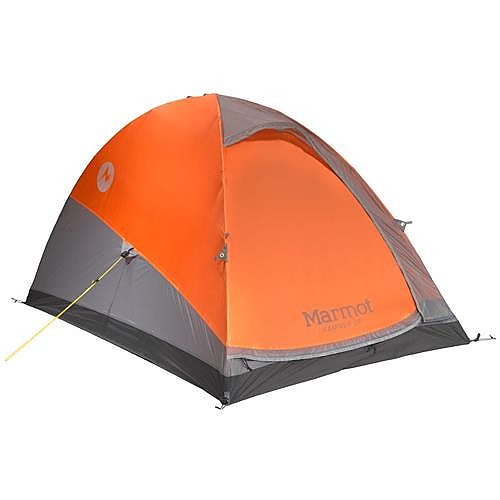 Minimalists will appreciate this ultralight, single-pole, two-person
shelter, especially when pitching camp in a flash is a prerequisite. The removable
floor provides perimeter venting for maximum air circulation. The rainfly is
made of 40 denier nylon ripstop and has a water-resistant 1,8000 mm coating.
The floor is made of 40 denier nylon and has a 3,000 mm coating to prevent any
moisture from seeping through.

We bought this tent to use on motorcycle trips where space is tight. It's been one of the best outdoor purchases we've ever made! The Haven 2P is a snap to set up, is huge inside, and packs down into a very tidy, light package. This tent represents huge value.

My wife and I are avid motorcyclists, and we prefer to camp out rather than stay in a motel. For the last 7 years we've used the excellent REI Taj 3 tent. It's been bomb proof through heavy Sierra rains, Owens Valley hail, and 50-MPH Death Valley winds. Its only real drawback is its heft.  Hauling it around, especially in summer, can be a chore, so we've been on the hunt for something lighter, yet still possessing a good amount of interior space for stashing all of our riding gear when off of the bikes.

I'm a big guy (6'2", 260 lbs.) and almost all 2-man tents are solos for me, and most 3-man tents are bulky and/or hideously expensive. I spotted the Haven 2P on REI's site, and was intrigued by its light weight, small packed size, and its massive 56 SF floor space. The price was a bit on the steep side, but a coupon and free shipping put the price down low enough that it was worth a go.

The initial set up was a snap, and I was very much impressed with the space and ventilation afforded by the single pole design. My wife and I can have it pitched in about 2 minutes, which is a big plus when the weather is foul, or if it's been a late arrival and we need to hit the hay. Setup involves loosely staking down the guy points, putting the single aluminum pole in place, clipping the crown of the tent to the pole, then adjusting the stakes. It takes almost as long to type it as it does to do it.

Thus far the tent has been very stable, but the highest wind gusts we've had in it have only been in the 15-20 MPH range. My guess is that too much more would have it flapping pretty good. We've not yet had the tent in any foul weather, but we're coming into Fall here, so that should happen soon.

This past weekend (our 4th trip with the tent) was the first time that we've had any condensation on the inside. We were camped near the coast, and the temps went from low 90's in the day to high 40's so a bit of moisture was expected. The whole thing dried out in the sun after less than 20 minutes. Not too shabby.

The tent has a pair of zip vents along the crown that can be held open by hook and loop risers.  This feature, coupled with the open-bottom design, allow for some very good ventilation. I suspect that we got some condensation inside due to the fact that we had a ton of riding gear, clothing, etc. jammed against the openings along the bottom, which inhibited the air flow a bit.

There is a ton of useable room inside. I can sit up easily to get dressed, and getting in and out of the single door is no problem at all, even for someone of my considerable size.

So far I can take this tent down and have it stuffed in about a minute flat. I like that. It also fits into a saddle bag, which is a big plus. The convenience factor of the setup and take down make the price much easier to handle. I don't mind at all paying for good gear when it works as well as this does.

From what I can tell, Marmot has discontinued this tent, which means that it's likely to be found at a lower price than the $229 list.  Even at that cost, it's worth it.

Easy set up with or without floor. Very stable even for a single pole. Never have had any rain come in or condensation problems.

Very roomy but a small pack size. Very easy setup. Stake it down, put in the pole, Done.

Three years and counting California coastal mountains to the Sierra, never had a problem. Super roomy so you can fit all your gear and even your dog inside with you out of the weather.