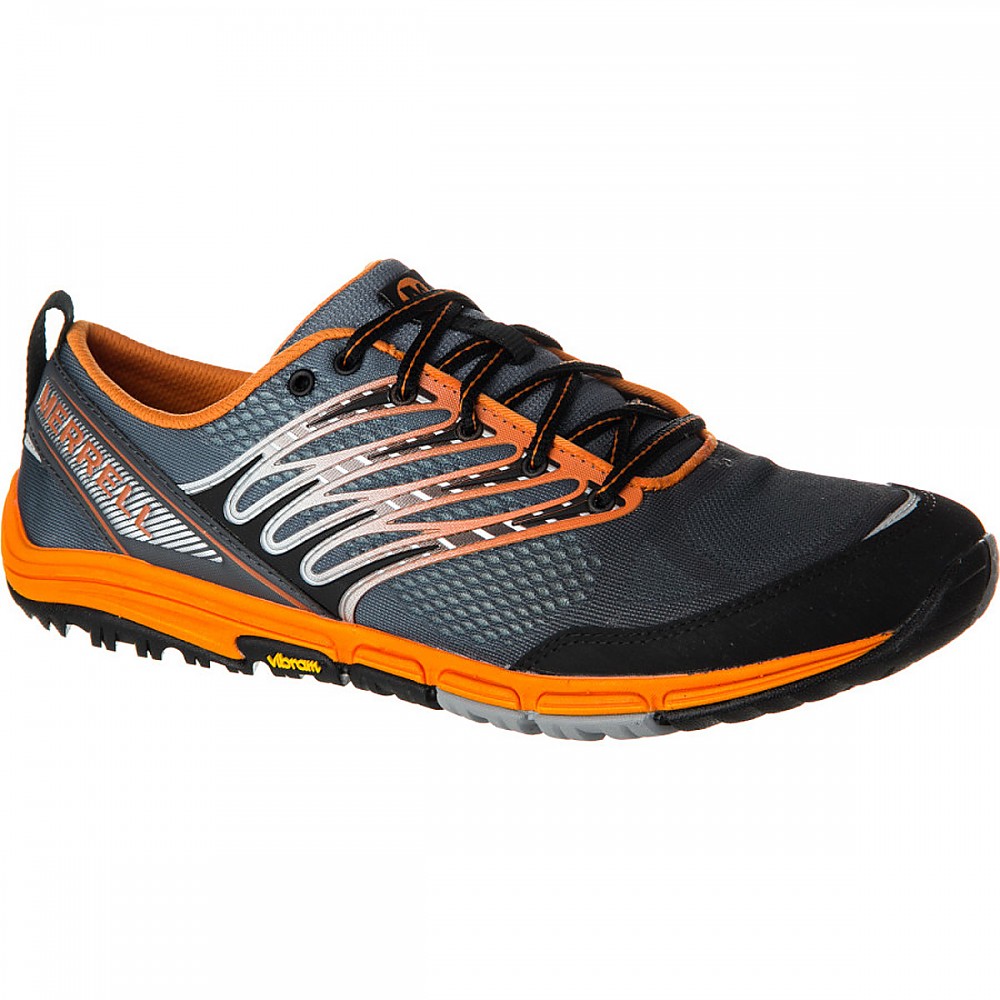 A minimalist shoe that offers a little more cushioning and protection for the bottom of the foot but less ground feel as compared to the trail glove. A good choice for anyone that wants to try a neutral shoe with more protection than a full-on "barefoot shoe", or for running on rough ground.

I have been trail running in Merrell's "barefoot shoes" (right up there with "jumbo shrimp" at the top of the oxymoron list) for about four years now: two pairs of original Trail Gloves, a pair of the Train Flux Gloves, and now a pair of Trail Glove 2s.

Those shoes all have thin soles that allow you to feel the ground, but when I have encountered rough conditions, especially sharp gravel or rocks, I have thought about trying something that offers a little more protection. So when I saw these on sale I decided to give them a try.

The are the precursors of the newer Barefoot Run Access shoes, so my comments probably apply to those as well. I broke these in on the first stretch of the John Muir Trail, carrying 35-40 pounds, and have since run a few hundred kilometers in them.

Trail Glove on the left, Ascend on the right. 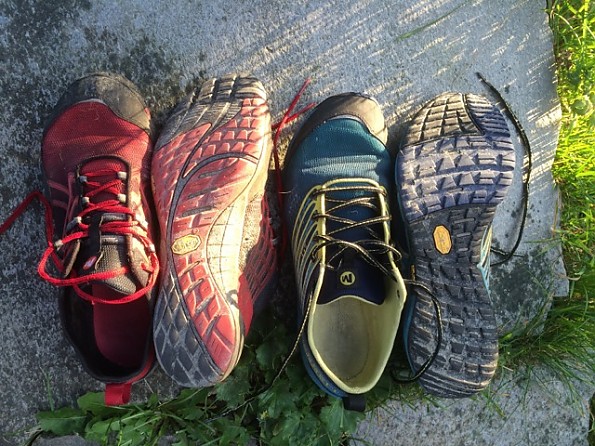 While the uppers have the same minimalist look as the Trail Glove, the real difference is in the sole. The Ascend has a broad outsole that will leave a print more like a traditional shoe, while on the Trail Glove the tread tapers to a thin strip under the arch and will leave more of a barefoot print. So the Ascend has a "flatter", less responsive feel.

The Ascend also has a tougher rock plate and a more cushioning (but still nothing like a mainstream shoe). With the Trail Gloves you can feel a lot of the subtleties in the ground, down to small pebbles underfoot. If those pebbles get a bit bigger and sharper like, say, coarse road gravel, they can  start to hurt. While I can't say I have ever bruised the bottoms of my feet in Trail Gloves, the Ascends offer a little relief when the going gets really rough.

While it looks like the soles might have a little better traction than the Trail Gloves, I can't say I really notice a difference.

I really like the fit of these shoes. They are wide in front and shaped nicely around the toes so that even if I leave them a little loose they are still comfy running downhill.

The uppers are made of a tough mesh material that breathes well. While I usually wear socks, they are quite comfortable without. So far they are holding up well — while the black toe cover has some exposed stitching, there is not a lot of exposed stitching along the instep side of the shoe, which is often where things begin to fall apart.

I have beens switching off between the two models, and while I prefer the  group feel of the trail gloves on my home trails, I find the Ascends quite comfortable and will use them on rougher mountain runs and day hikes.