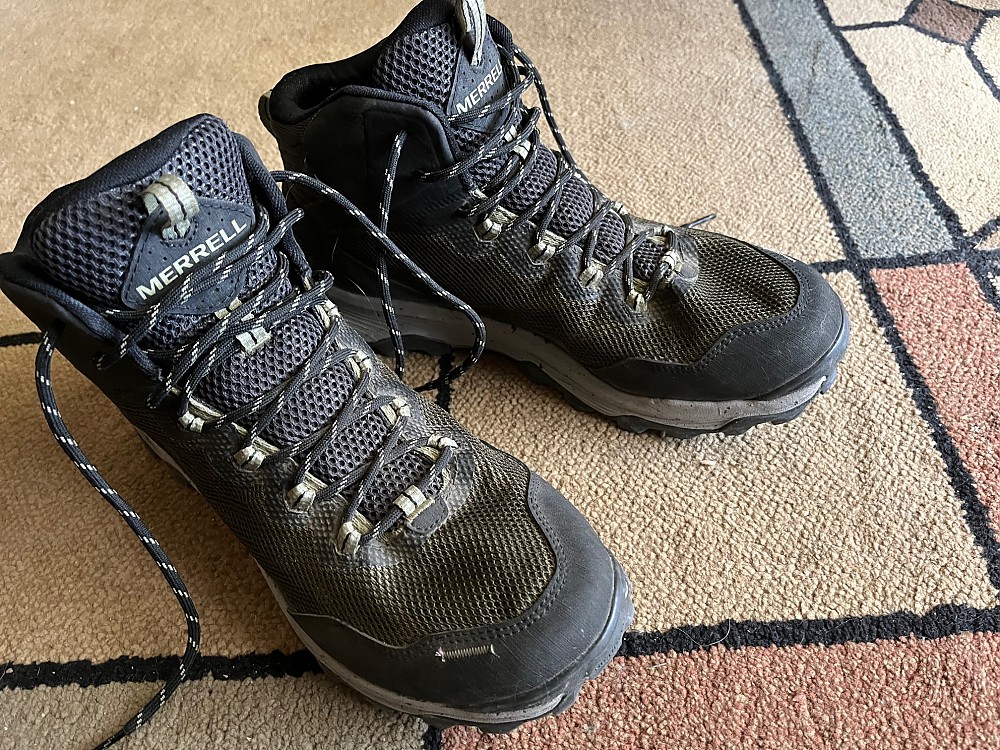 Comfortable boots that are durable for their weight. These are good for people who want something more substantial than trail running shoes but don't want to be weighed down or feel restricted by backpacking boots. Based on my experience so far, I recommend them for backpackers, peak baggers, and hunters.

When I bought these boots I was in urgent need of some waterproof boots for work, and these were available locally and immediately. This model isn't listed on the Merrell website, and as far as I can it's only offered at certain chain stores such as Shoe Carnival and DSW. That struck me as a bad sign, but in spite of my doubts they have proven to be very good—at least as good as my previous waterproof Merrell, Keen, and Oboz boots.

These boots are not exactly handsome. They're not traditional hikers in terms of materials—they are made with no leather at all. When I wear them with long pants, it looks at first glance like I'm wearing tennis shoes. The tennis shoe vibe carries over to the feel of the boots when wearing them.

While not quite tennis-shoe level comfort, these feel pretty close below the ankles. One potential comfort issue is for anyone who likes fancy insoles—these are very basic insoles, even more so than those on other Merrells.

From the ankles up, they obviously have more material and support than tennis shoes. They go up higher than my usual boot choice, the Merrell Moab 2 Ventilators, and feel like they are hugging your ankles rather than just up there touching them like the Moabs.

They are well padded without being super thick. I think they feel great, and these would be a great choice in terrain where you're worried about exposed ankles getting scraped and bruised on rocks. The ankle hugging quality might also be a factor in why these boots are so hard to put on—you really have to loosen the laces a huge amount to slip into these boots and even then it's somewhat tight.

The outsoles are holding up great so far after about two months of use. They have plenty of traction for hiking on a wide variety of terrain from South Dakota to Colorado, whether it's wet, muddy trails or slick rock. They are not Vibram soles, however, so I'm not expecting the sort of longevity I have typically gotten from my Moabs, where the rest of the boot typically has fallen apart before the outsoles are done for.

The boots claim to be waterproof. They have the Merrell waterproof membrane rather than Gore-Tex, which would be more expensive but would presumably perform better. Although I have not willingly tried to get my feet wet in these boots (not even for the sake of a Trailspace review!), I have been in wet grass, mud, snow, and shallow puddles that occasionally came up above the midsoles and put the waterproofing to the test. So far they've been completely waterproof.

The flipside of that waterproofness is that these are warm boots even in fairly cool weather. I would not choose them for a midsummer hike in the Utah desert, but I would wear them in the summer at high elevations in the Rockies. I would like to see a Gore-Tex version of this boot in order to see how much better it breathed.

So far durability has not been an issue. The mesh fabric has yet to come apart. Long term, I'm still nervous about the mesh and do not count on it to last forever. I have also encountered occasional stray threads that I simply snip off when they show up, and they haven't been an issue. Encouragingly, the toe caps have shown no sign of separating from the boots or coming apart.

I've worn these boots for four or five days a week for hours at a time hiking off-trail in thick brush. I have worn them in a wide variety of weather conditions. I've only had them for about two months, and although my usual method is to wait until I've basically killed the boots to review them, Merrell drops shoes from their lineup so often that I thought it'd be worth putting a review out sooner rather than later.

Thanks for letting us know about these boots, CO_forester!