The Namche has been discontinued. If you're looking for something new, check out the best hiking boots for 2022. 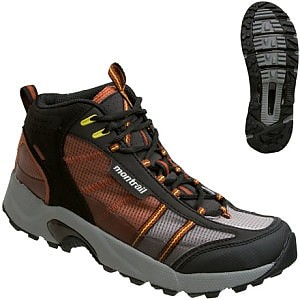 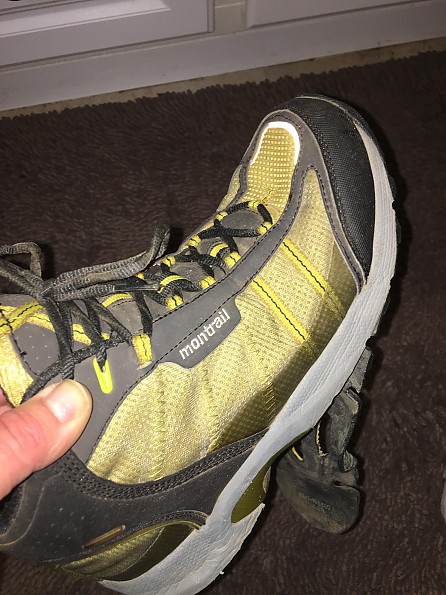 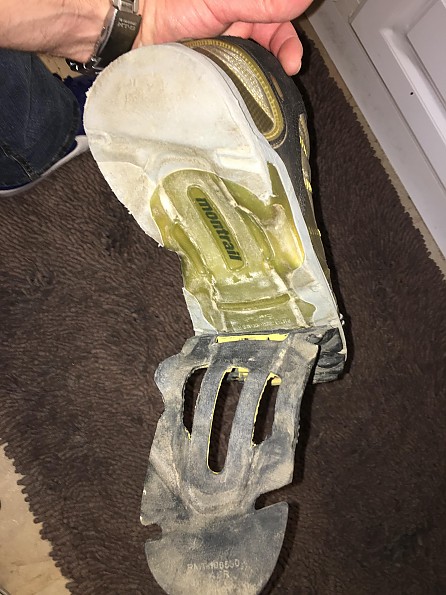 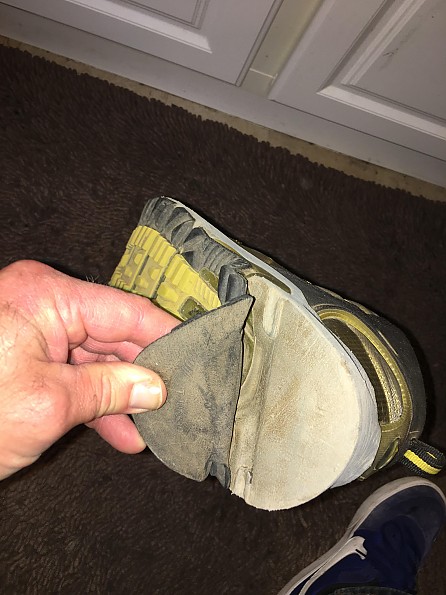 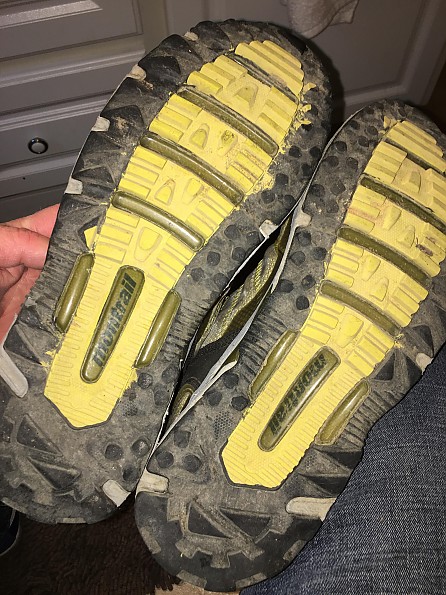 After approximately 10-15 relatively short hikes the soles delaminated severely. One is now only attached at the toe. The other is about 25% detached.

They were comfortable and lightweight. Just wish they'd lasted longer.

Hey Dugan, I don't know how long you've had thise, but the sole falling off like that is manufacturer defect. They should take care of the matter, if you feel up to dealing with customer service.

Thanks, madmarmot, they are several years old (5-7?) but, as a lightweight (not waterproof) boot in the Pacifc NW, they haven't seen many miles so, I'll definitely contact Montrail/Columbia Sportswear and see if they're responsive.

Thanks for the review, Dugan. Good luck with the boots. Do you have any pictures you could add to your review to show others what happened?
now

Hi Alicia, pics added. As you can see, uppers are still in good shape and minimal wear to the tread, when the soles detached.

Thanks, Dugan! Good luck with the shoes. Have you tried to reattach them with glue or any other methods?

When the Montrail Namche—a lightweight, mid-cut hiker built on top of a trail running platform—was named Backpacker’s Best Fastpacking Boot for 2007 it caught my eye. While I have several trail runners and heavy-duty backpacking boots I like very much, I had yet to find the right, light but sturdy, trail shoe for moving fast. The Namche promised the feel of a trail runner, with the support of a day hiker, exactly what I’d been looking for.

This could be it, I thought.

So after nearly 70 miles of summer hiking and backpacking, on- and off-trail, did the Namche win my favor? Well, there are things I really like about the Namche and things I really <i>want</i> to like about it, but it’s not quite my perfect trail shoe, at least not yet. But it is closer than anything else I’ve tried.

The Shoe
Designed for light and fast hiking and backpacking, the Namche is a lightweight (women’s 13.4 oz per shoe, men’s 1 lb 0.2 oz), mid-cut shoe built on the same platform as Montrail’s popular Hardrock trail runner. The Namche features a full length, lightweight TPU (thermoplastic urethane) plate under the foot for support and protection on rough terrain and a dual density midsole for midfoot support and pronation control.

The Namche offers excellent ankle support, thanks to a stiff, injection molded TPU piece. The ankle collar is surprisingly stiff for such a lightweight hiker; in fact it can take some effort to wiggle your foot inside. But once you’re in your foot is secure and comfortable.

The synthetic nubuck and airmesh upper is light and breathable and designed for maximum ventilation in dry and warm environments. Due to the light upper materials, you need to be careful not to over tighten the laces and create pressure points. I learned to keep the toe box looser and increase tension around the ankles for the best fit. Due to the light, breathable uppers, there isn’t a lot of protection for the foot or toe. If you hit a rock you will feel it.

Thanks to its trail running base, the Namche strikes a good balance between rigidity and flexibility. The shoes provide adequate cushioning, though they are a bit stiff in the heel and Achilles area and those overly sensitive to sharp rocks underfoot should avoid them.

(For a custom footbed in any shoe, Montrail separately offers the thermo-moldable Enduro Sole, which you imprint with your foot shape. I often use them in my running and hiking footwear, but with the Namche I used the shoes as-is, straight out of the box.)

Since they’re designed for dry conditions, there’s not an ounce of water-resistance in these hikers. So don’t even think about taking the Namche on a wet, muddy trail, unless you enjoy hiking with wet feet. Water will leak inside immediately as soon as your foot finds a puddle.

For such highly breathable shoes, when mine did get wet (as they did repeatedly on one three-day backpack) they took a long while to dry out. In fact I spent the better part of two days backpacking trying to dry out the Namches during rest breaks. In 2008, Montrail will introduce a waterproof Hardrock Mid, putting a Gore-Tex upper atop the same platform as the Namche and Hardrock. In the meantime, don’t be tempted to use the Namche in wet conditions; it will be out of its element.

The Namche features Montrail’s Gryptonite Trail outsole. Traction was good for most dry terrain, but not a super-sticky standout, especially on slick rocks and roots. I felt some slippage on wet rocks at Acadia National Park and while descending a steep, rocky trail when it started to mist, though I never had any actual falls. The Namche worked on short, dry scrambles though and the outsole’s rugged lugs have held up well over rough terrain.

Concerns
I had two concerns about the Namche, which prevented me from loving it. First, Montrail says the Namche has a roomy toebox, but my big toes and their toenails disagree, especially on the downhills. I have a normal/medium arch and a medium to medium-wide volume foot and I tested a women’s size 7, my usual shoe size. However, I could have gone up a half size due solely to the pounding I suffered in the toebox while descending, but I worried that I’d then suffer some heel slippage (hence more pounding). Often I just wore a thinner sock to reduce the damage, but it wasn’t a great solution.

Durability was the other issue. After only 70 miles my Namches appear pretty well worn. The heel loop on the back of my left shoe broke off in my hand while pulling it on. And while the right heel loop is still attached, it looks like it’s about to pull out of its stitches. The seams at the toes are showing some fraying and the uppers are a permanently dirty brown color (thanks to a long, muddy trek).

To be fair, the Namches have gone up and down some steep, rocky trails, and through some rough bushwhacking with two days of on-and-off mud and puddles (this is where I found their limits). And the outsoles and most of the upper materials have held up, with no major signs of abrasion. But 70 miles isn’t terribly far for fastpacking boots, even with hard wear.

Conclusion
The Namche has the basis for an excellent fast-and-light hiker for dry, warm weather —a sturdy, but flexible trail running platform, lightweight uppers, outstanding ankle support. With the exception of the toebox, the fit was good.

They continue to tempt me, but a few tweaks and upgrades are in order first. If the fit of the toe box was improved a tad and the durability issue addressed I’d be quite happy with them. If the traction was super-sticky on both wet and dry terrain they could be everything I want in a fast-and-light trail shoe.

At first, even though these had a tendency to grab my socks in the ankle area, I really liked them. Great for scrambles to the North Lookout at Hawk Mountain, and on nature walks at our environmental center.

Recently though, after about a month of owning them, one of the glued-on/bonded lugs on the sole has begun to come loose. While you may think this is minor, it has actually caused me to trip a few times, nearly falling on the trail. I'm sending them back.

The Montrail Namche might be sold using terminology like 'fast packing' 'thru-hiking' and other slick-sounding outdoor industry buzzwords... but let's get down to brass tacks. The Namche is a high top trail running shoe.

Compared to a standard trail running shoe, it will give you some more ankle support and will be a bit better at keeping debris out. The other side of that is that it is a little less comfortable for long trail running because the extra ankle collar limits mobility a bit and makes them a bit hotter.

It's not a hiking or backpacking boot. It doesn't offer a stiff shank or the kind of support, construction or protection a hiking boot does. It provides some extra ankle support, but not enough full-package support (foot, ankle, etc) to make you think of leaving your regular boots at home when you're carrying a 40-plus-pound pack for a week. Be real. These are sneakers.

It's not waterproof. If you want a similar shoe that's waterproof, look at the Montrail CTC Mid (although you wouldn't want to run too far in those...). On the plus side, the Namche is much more breathable than any waterproof shoe. There's nothing I hate more than steaming my feet in gore-tex shoes on a warm, dry summer day.

I love my Namches for day hikes with a small pack. I love them for taking the dog for long trail excursions where I mix a bit of running in with walking and scrambling. It's a great approach shoe for bushwhacking to the base of rock climbs.

I recommend them for these types of uses. I wouldn't expect them to replace my leather hiking boots for backpacking trips. Then again, if you're a serious light-packer trying to shave every ounce these might work for you...

Note on sizing. These definitely run smaller than marked. I ended up going with a half-size larger than my normal street shoe size; and, I possibly could even have gone up a whole size. Plan on going up a whole size if you like to wear thick socks or like a roomier fit.