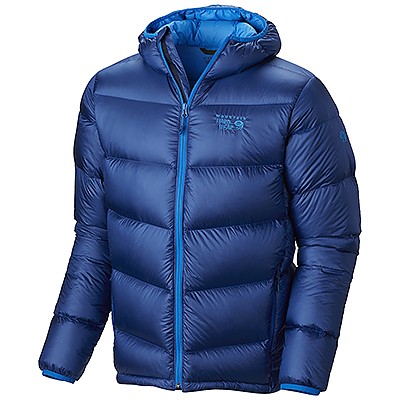 The Kelvinator is a warm, lightweight, compressible down jacket that has become my go-to in the backcountry this winter!

The abundance of snow and persistently below-zero temperatures that have defined winter in New England this year have prompted my search for the ultimate puffy jacket this season. (Consequently, I have spent many an evening basking in the glow of a Trailspace search.)

I was initially drawn to the Kelvinator by its price tag. Full retail is around $280, which I found to be well below that of other jackets of comparable quality (I bought it mid-season, and paid around $200). The fit is perfect- just enough space for some base layers underneath, but fitted enough for me to avoid mimicking a giant blue marshmallow, and, more importantly, to keep the snow out and the warmth in.

There is elastic on the sleeves and hood, and drawcords at the waist, which further prevent the elements from finding their way through. The sleeves are the perfect length for me — just long enough to allow me to stretch my arms without exposing my wrists to the cold (see extraordinarily un-candid photo below). 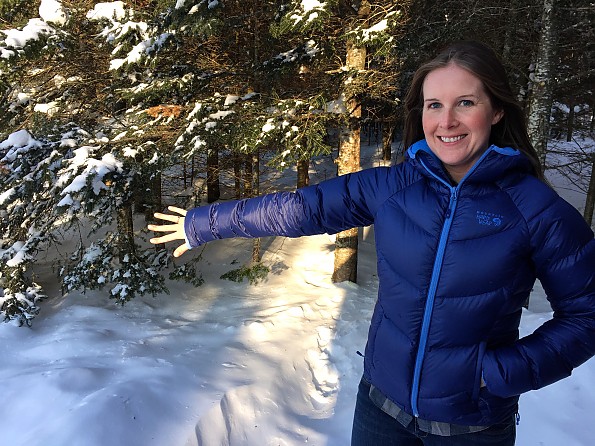 I find puffy jackets pretty comfy by nature and the Kelvinator is no exception. I feel like I'm wearing my sleeping bag (in the best possible sense) whenever I have it on. As a bonus (and maybe it's because my name is Kelly), wearing a jacket called the Kelvinator makes me feel like a superhero, which is surprisingly helpful on long, cold backcountry excursions! 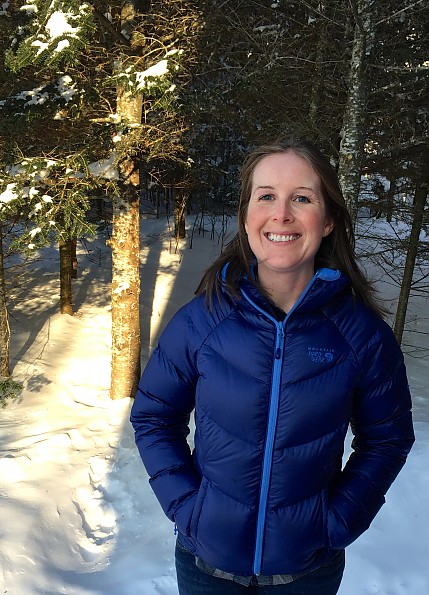 Mountain Hardwear uses Q.Shield, 650-fill down, which is advertised as moisture-resistant and designed to maintain warmth and loft even in wet conditions (according to the website, "down fibers are infused with a permanent water repellency...").

I've worn the Kelvinator on snowy days when temperatures were well below freezing (down to -18 degrees fahrenheit, probably colder considering wind chill) and have remained dry and warm throughout. However, the air has been dry, and there has been limited moisture in the snowfall this season.

I'm looking forward to testing the jacket under the inevitably wetter spring snow conditions, and will plan to post an update then regarding the quality of the moisture-resistance. 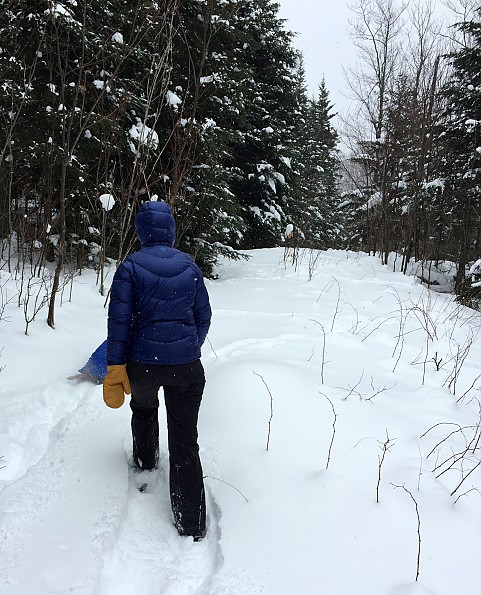 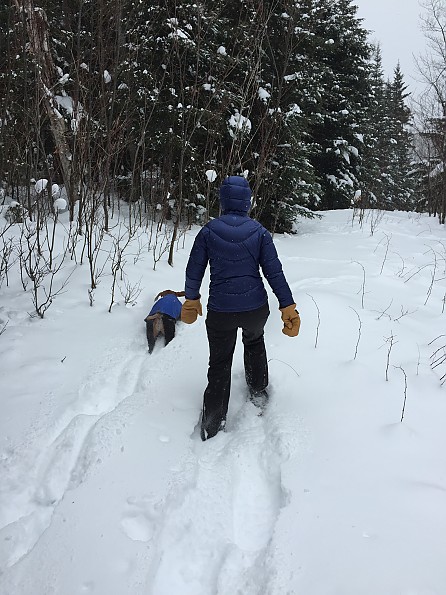 I've been wearing the Kelvinator primarily on backcountry ski touring trips. Despite the jacket's luxurious warmth and high loft, it's surprisingly compressible and lightweight. It fits easily into my pack, and with an advertised weight of 1lb 4oz, its presence in my pack is virtually unnoticed until I grasp for it when I reach the summit. The photo below shows it fully compressed in the stow sack (next to an iPhone 6), which is contained in one of the two front pockets.

I tend to stuff the jacket into my pack rather than compressing it this way. In fact the first (and probably only time) the stow sack has been used was for this picture. After three separate trials of mashing it into the pocket, I gave up on trying to zip it closed out of fear of breaking the zipper or zipping the jacket in the process. To me, this is not a big deal as I will rarely compress the jacket into the stow sack during normal use, but something to consider if you have your heart set upon maximum compressibility. 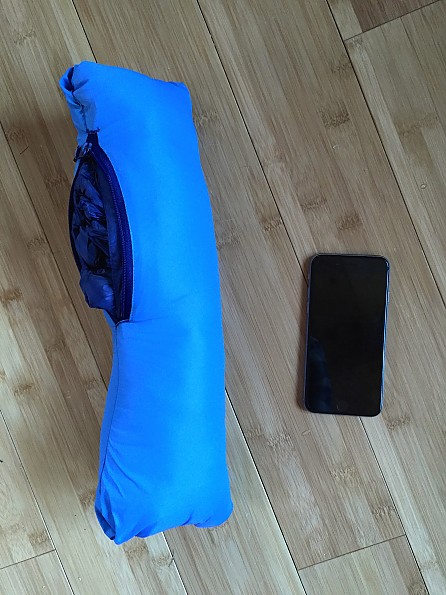 The hood is great for keeping me super warm, especially at the start of a winter excursion (when I must forcibly resist the urge to run back to the warmth of my wood stove), or while enjoying some down time at the summit. The elastic keeps the snow and wind out and is comfortable against my skin.

While the hood will contain my helmet if I really work at it, I wouldn't say it's entirely helmet compatible- it's a tight fit, especially when zipped all the way up. Unzipping a few inches makes it much more comfortable, but also runs the risk of the hood flying off during the ski down. 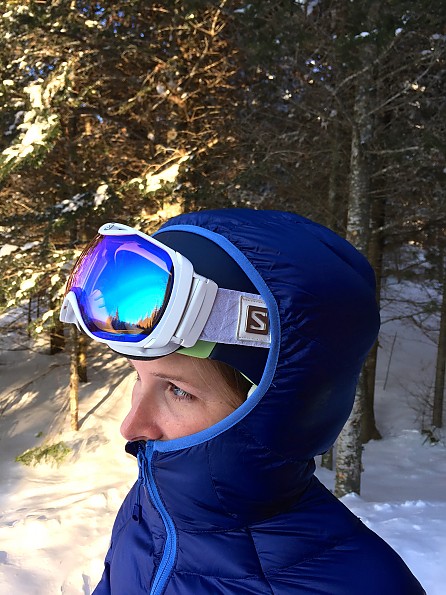 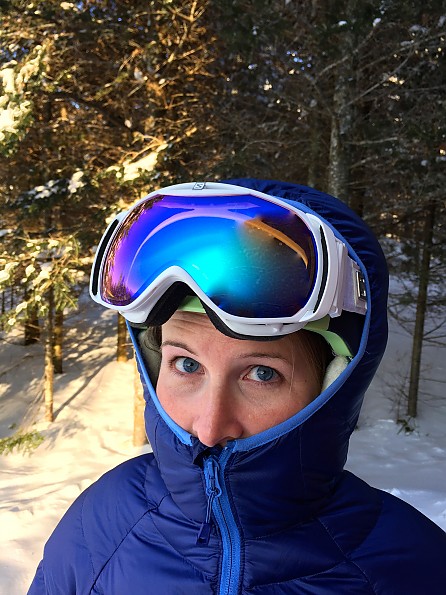 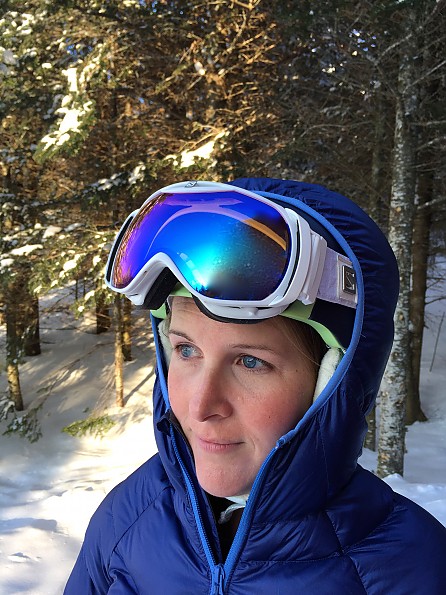 All in all, I feel confident abandoning my search for the perfect puffy now that I've found the Kelvinator. Here's to many more powder days in New England this season!!! 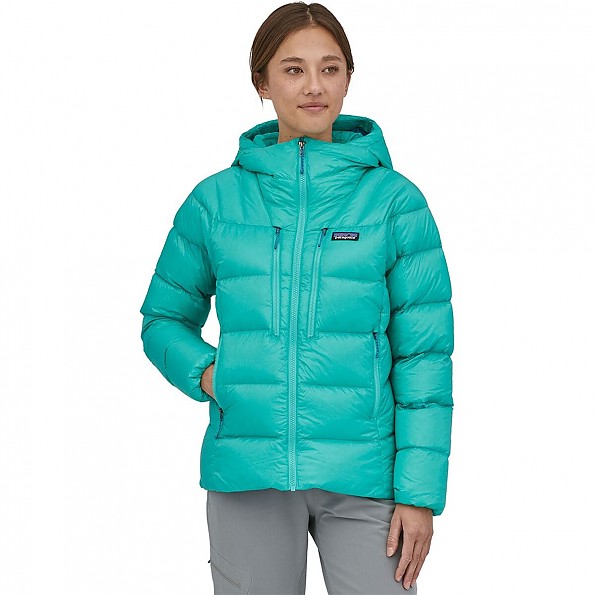