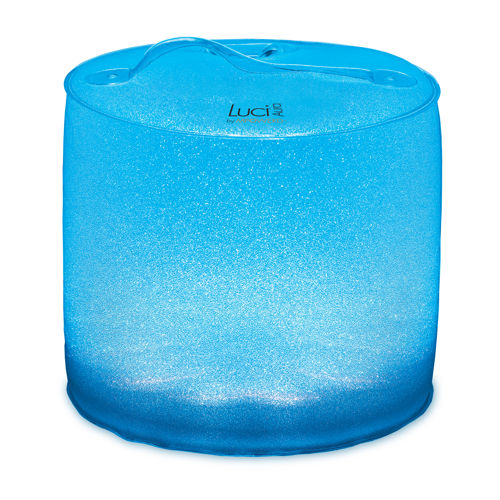 Handy and convenient lantern-like light that adds a decent amount of ambient light to a campsite or a tent.

Handy and convenient lantern-like light that adds a decent amount of ambient light to a campsite or a tent, especially when paired with a second one. While it won't push out as much light as a conventional propane, white fuel, or similar lantern, it does provide enough light for a game of cards or the like.

When it's not being used, it packs down very well (maybe the size of 10-15 stacked CDs — the CDs themselves, not including the cases), and inflating it is as simple as blowing it up as if it was an inflatable pool toy.

It's difficult to tell how many hours of use I got out of mine (I have two), but they both lasted 1.5 nights while on a camping trip in the spring in Virginia (sun probably set around 7 p.m. or so) and without much daylight for the purposes of recharging (overcast and rainy). I have to imagine I would probably get nearly two full nights in the summer with a Luci after accounting for a later sunset and sunlight to recharge it.

While I cannot speak to its ability to float, I will say that it survived a weekend in the rain without any problems.

In full disclosure, I have two MPowerd Luci Auras, each of which has 8 different colors (including white) and a setting which cycles through all the colors. To change the brightness, I either put it on white to make it brighter or an off color like purple to make it dimmer.

Overall, I would buy them again.