I love this tent. I have put it through the ultimate test and it survived.

My tent is 6 years old. Has survived Burning Man and camping in a northern California rainstorm for a weekend.

During the rain I had no leakage, however we made sure we were camping in a suitable area that drained downward and we waterproofed and used plenty of tarps.

As far as Burning Man goes, I would not recommend this tent for the Playa but our tent got ruined by a dust storm and this was the backup. It did well. It needed some massive overhaul done to prevent dust from entering.

The tent has also been on many camping trips with us and is easy to put up and take down. The size is huge and if you are tall it is a blessing. The seams have kept well over the years and all the zippers seem to still be holding up well.

I've never tested the tent in any major weather event, aside from rain and heat. The rainstorm was relatively minor and lasted 3 days.

Off-trail mountain camping, campground camping, Burning Man (the ultimate test, not recommend for this tent), beach camping. Most of my camping has been done throughout California.

For the money this is a great tent.

My wife and have a pontoon boat and spend most of the summer on the river. We started looking for tents so we could camp on sandbars over the weekends. I wanted something roomy so we decided to look at 8-man tents. Because this was our first tent, I wanted to not spend a lot. This is the tent we chose.

I totally love this tent. It is very easy to assemble, no leaking, and is durable. It takes us about 10 to 15 minutes to set up. As a matter of fact, we can set it up faster then tear down. Most tents that say 8-man mean 8 bodies head by foot and squished together, not this one. This tent would easily hold 8 people comfortably.

If there is anything I would change about this tent, would be to put inside flaps on the windows. As it is designed, the privacy/rain flaps must be zipped from the outside. Also (like most tents) the case is just large enough to be factory packed. A little more room would be nice.

I would, and have recommended this tent to friends.

I love this tent, there is a lot of room. The only problem is on the third use got caught in a heavy rain storm and everything got wet on the bottom.

I have treated the tent with Camp Dry and had no leakage around the seams.  The leakage is coming up through the bottom, even though I have placed a tarp on the ground before placing the tent.

Does anyone have any suggestions on what type of treatment can be used on the bottom of the tent to prevent the water from coming in?

This is a GREAT tent. The guys who complain about leaking are only doing so because they haven't waterproofed it beforehand.

The first time I used this, the carrying case ripped so bad it was almost un-usable.

The second time I used it, a couple of the areas close to where you stake it down started to come apart.

The third time I used it, one of the fiberglass poles broke.

Now, it is completely useless. I paid over $100 for it and got to use it a grand total of 3 times.

Don't waste your money on this. Get a different brand of tent that is made better.

This tent was so spacious we actually had "too much" room which was very nice with a toddler running around!

However, as far as weatherproofing and quality it was horrendous. All it did was leak each time it rained (or even sprinkled) and half way through the trip, one of the poles broke and half the tent collapsed while we were sleeping in it.

Returning and will not re-buy this model.

Well to start off I bought this tent to replace an old three person dome tent. So compared to my old one this thing is huge. It says 7-8 person and I'm sure that 7-8 people would be comfortable. I bet if you needed to 13 people could cram in there.

Even though the tent is so big it's not to hard to setup. I did have some trouble the first time due to bad directions but I learned a little trick that really helps, which I'll post at the bottom. I can setup the tent in about 20 min by myself. Dissasembly isn't too hard either but just like every other tent it takes skill to get it back in the bag.

Another thing I like about this tent everything seems pretty durable like all the seams are double threaded and the rain fly and closet area have sealed seams. Plus the rain fly is water phobic, water just beads and rolls off. Even the tent material is water resistant. I'm not sure if this is a standard feature on tents now but I was Impressed.

Now my review is going to start getting a little more negative. Even though the material is water resistant that doesn't make up for poor designing. The side windows aren't covered by the fly and the way they are made it seems to funnel the water right into the seams so leaks are bound to happen. Plus water runs right off the fly onto the sides.

I'm not saying this is a bad tent but it definitely could be better. It shouldn't be taken out without being waterproofed, and having a tarp to throw over it wouldn't be a bad idea either. Just remember there's no such thing as a water proof tent. Overall this is a ok tent but considering its price it's a great tent.

That trick I mentioned earlier is first lay the tent out then put the pegs in the corners keeping the tent taught. This will make it so when the poles go in it doesn't try to fold in on its self and the floor shouldn't have wrinkles.

I've had a lot more experience with my tent now and thought i should update my last not so excited review.

I've had 9 rowdy guys sleeping in that tent one night comfortably so the 7-8 people rating is with more then just elbow room.

And for weatherproofing im impressed actually. I camped out during a severe storm advisory, i know we didnt get the full force of the storm but it still rained pretty good for several hours, and there wasnt much more then moist spots and droplets in the tent. I did use an entire tube of tent sealer on it and had a 9 by 9 tarp covering the side the wind was blowing on but still it performed great.

minus half a star cause its still such a pain to get back in the bag.

Cheap, simple, and performs well, its a good tent.

I love this tent! I've camped a lot and had everything from pup tents to RV's. As tents go, I find this one to be a great design for ease of setup (as an experienced camper), usable floorspace and gear storage. The closet can double as a midnight bathroom with the right portable toilet.

I give it a conservative 3.5 stars only because I have not had it yet in the rain. I was concerned about the space around the closet as a possibility of leakage, but found that adjustments on the bungees and ropes brought adequate coverage to the area. A little waterproofing in a can should take care of any minor problems.

It has great ventilation with the front of the rain fly propped up and even on a very foggy morning there was no accumulation of moisture on the tent at all.

Reviewed by
Joy From Southern California

This is my first tent. We "don't camp", but needed a tent for myself and my three kids on a church car-camping trip in August. Not worried about rain -- we live in Southern California.

Instructions are the most basic...not very helpful at all. I put together the tent poles first and looked at the picture which looked like the longer poles went in the middle. I added color coded tape to help when we actually get to the campground. Needed another to help put it together -- 2 women, it took about 15 mins.

Read that with every tent you need to seal the seams and water repellent doesn't hurt. A friend of mine suggested a tarp for underneath. Will write about the actual camping experience when we get back.

I do like the 4 storage pockets and flash light loop at the top of the tent, and the 4 windows are great and let in a nice breeze (at least in our backyard).

Good tent for the money if it holds up, I didn't want to invest a lot of money if we only go camping for one 3-day weekend a year.

I only give this tent 2 stars because it is fine as long as it doesn't rain. Even in a light drizzle the closet space leaks and gets any gear you may have stored there quite wet.

The corners are poorly designed and even after using seam sealer rain just pours in. We had a major storm blow through and all 5 of us ended up huddled in the center of the tent, our bedding drenched and we were shivering.

The zipper on the door constantly sticks. My 6-year-old had a very difficult time operating it himself. Also where the zipper meets the tent there is a very small gap, just large enough to let a few bugs in.

I could only recommend this tent to someone with no children and if you were absolutely sure it won't rain. 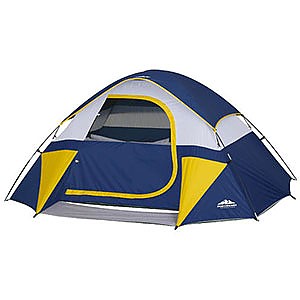