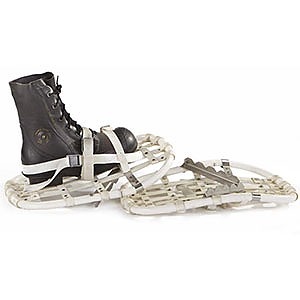 Surplus, made for soldiers carrying gear, great for kids and inexpensive.

I bought these last year in an inexpensive attempt to get my 11-year-old grandson into snowshoeing. He loves them. My grandson is just a typical kid, not big nor small, but is somewhat athletic as he isn't  a couch potato.

I first put them on him in the yard and said walk around. He easily was climbing snowbanks and getting around so I put my own shoes on, grabbed my pack and said, "Let's go across the street"...where I have access to many hundreds of undeveloped acres, which is unfortunately changing.

The snow was about two feet in depth so I broke trail. I could hear him behind me saying things like, "Awesome," "This is awesome," which is what I hoped for.

I took him across flat brushy land and down a moderate hill and into what I call[ed] the Black Forest which is/was a pure stand of old Hemlock and a few pine. This summer it was logged and logged terribly so it isn't Black [shaded anymore] but the boy did get to see it. The deer will miss it as it was a bedding area. I have no problem with logging but bulldozed stumps standing 8 to 10 feet high isn't what should remain.

I then took him into a stand of spruce and said "Want some hot chocolate?" Puzzled he answered "Sure." So I took off my pack, rolled out the Ensolite and said "Sit", then got out the Swiss Volcano Stove and made us some hot chocolate. The boy was saying, "Grandpa this is so cool." And that's what I wanted. I love me and him having the memory, but just as important I wanted him to experience some winter in the woods.

From there we climbed a snowy hill on an old logging road and all the time he was right behind me. I do not know how good these shoes are for an adult with a pack on, but I do know they work real well for a kid of 11 and are a fine way to introduce a kid to snowshoeing while saving some dollars at the same time from mainstream snowshoes.

There are rivets holding the webbing to the pvc frame and nuts and bolts hold the crampons on.

I bought mine through Sportsman's Guide but have seen them elsewhere online. German and U.S. military snowshoes are quite similar but run more dollar wise. I bought mine, or should I say, my grandson's? for $26.

Trailspace's community of gear reviewers has field-tested and rated the top snowshoes.