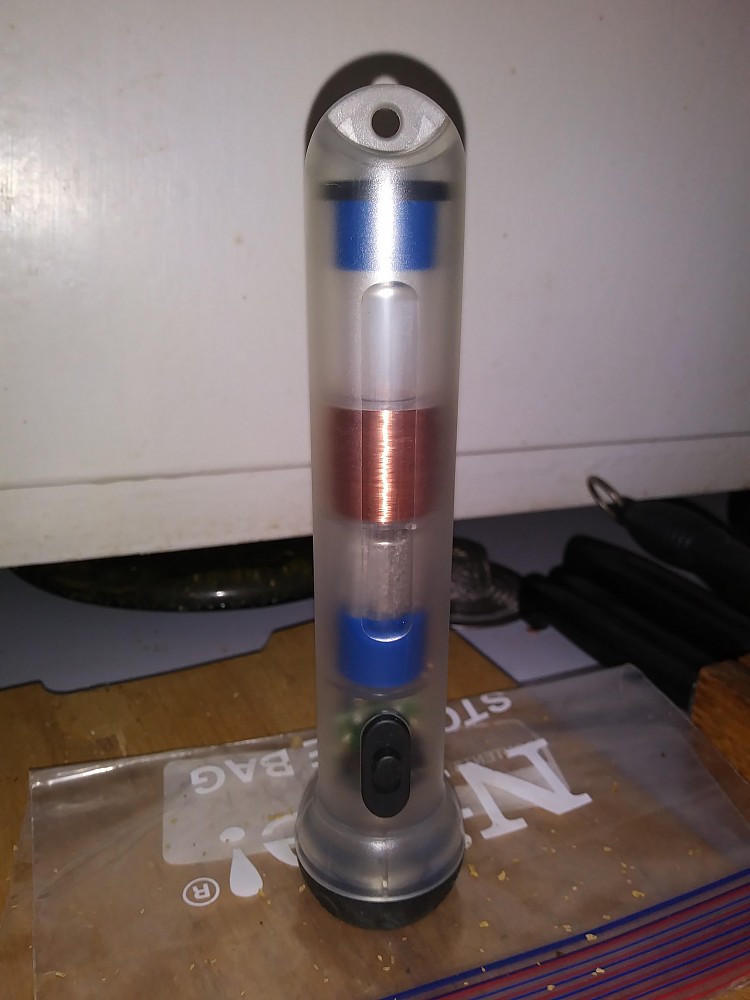 Oh great, I can't see a darn thing. Alright, let me get out this Forever Flashlight. Ok, slide switch to on position, got it—so now what. Ah, I need to shake it.

What I have here now is a paperweight, and a magnet for the refrigerator.

The Forever Flashlight is based in short, on Maxwell Faradays' Law of induction where a moving magnet can create electricity through magnetic fields.

I ventured into a local Dollar Store to find a whole shelf of these Forever Flashlights. Majoring in Physics, Mathematics, & Engineering in college I was very familiar with Faradays Law and with the Faraday Flashlight concept. I was very excited to save money on batteries so bought  a few of these flashlights to keep around the home in case of a power outage.

The first thing I did when I got home was take one of these flashlights apart.

The flashlight was suppose to have in it a rechargeable battery but instead had 3 button batteries. The so-called magnet was a piece of metal with aluminum foil wrapped around it. Even the soldering job on the circuit board was subpar.

A counterfeit knockoff... I wasn't upset with the store whatsoever. How many people would go home and take something apart that they just bought? And technically the flashlight produced light. They even got the formula correct on the box. The problem is everything else was an illusion.

I am writing this review as a warning to other people. Since this pandemic hit, I have seen a growing number of knockoffs on Amazon. When these resellers online find out their merchandise are fake their only course of action is to get some form of reimbursement for their investment which means selling them to Dollar Stores.

I do want to point out that the Forever Flashlight was still a good purchase for me. I stripped the flashlight for parts and got a useable LED bulb and 3 button batteries that I was able to use in other devices. In the end I came out ahead due to this, and saved money. Sadly, the retailer that had sold these to the Dollar store did lose money on their investment.

I would also like to note that I have no way of knowing if all of the  Forever Flashlight brand are knockoffs.  I have not purchased these from different retailers nor from Amazon. I can say that I have seen very poor reviews from some customers on Amazon that have bought this flashlight, they do not mention that it is a knockoff, but do say that it was cheaply/poorly made.

I have used 3 different brands of the Faraday Flashlight. The Forever light version was the only dud.

In college we had studied Faraday's law, and its principal has been with me for 30 years. It is a great concept and honestly I urge people to try to find a Faraday Flashlight that is not a knockoff as mine still works after 17 years. I can only imagine how much money I have saved in batteries for it over the years and how many batteries I didn't have to throw out, contributing to our world's garbage/pollution.

Trailspace's community of gear reviewers has field-tested and rated the top lights.