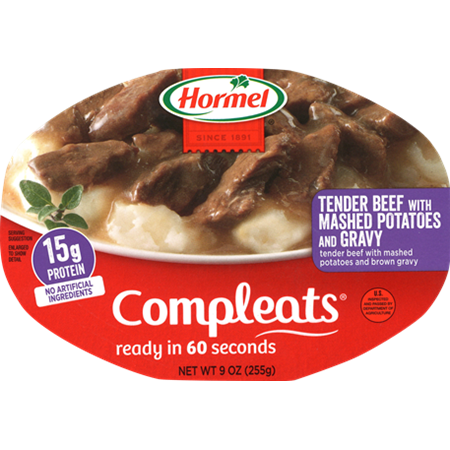 I want readers to understand the reason why I purchased this product. April of last year (2020) here in N.Y. the shelves at the local supermarkets were all bare. I went online to Amazon and tried to find precooked foods with long shelf life to hunker down until the markets had food again. I was limited by Amazon to buying a max of two of these.

This product is best used as either a paper weight or a retaliation gift to a friendamy. I do not recommend this product.

With all of the grocery stores bare back in April of 2020 during the Covid-19 pandemic I was forced to go online to try to score some food.

I was looking for high calorie food with long shelf life. All the freeze-dried and dehydrated food companies were sold out. I was introduced to Amazon foods section of their website  and found Hormel Compleats Tender Beef with Mashed Potatoes and Gravy. I was limited to only two of these from Amazon. Little did I know someone that worked at Amazon limiting customers' quantities of this product was possibly doing that for humane reasons.

When the food package arrived I noticed that these two products had different expiration dates and neither was going to expire that year, so I was happy, or so I thought.

Two months later, still bare shelves at the markets, I decided to open one of these that had the earliest expiration date. I was very excited as I love beef stew, which is in essence what this is, and I love mashed potatoes. After heating it up on a frying pan I took my first bite.

Ok, so as with former President Clinton who said yes he smoked but didn't inhale, I took a bite of the beef but did not swallow. Instead I ran to the garbage pail and spat it out. The texture was dense and hard to chew, but the flavor was chemical. I tried to see if maybe it was the gravy, so I took a smaller taste. That had a different chemical-like flavor and, yes, another trip to the garbage pail.

By this point and time I was getting sick of walking to the garbage pail, but what else was I gonna do with this stuff in my mouth? My next move was to go online and see if this product had been recalled. NOPE.

OK, so maybe it was a bad batch. That happens all the time. So I opened the last package of this and cooked that too. Took one small bite of the beef and potatoes and gravy mixed together then grabbed both packages of Hormel, quietly walked one last time to that beloved garbage pail, and threw everything out, but saved a small portion of the first package I opened, and put it into the refrigerator in case this was botulism.

A week had passed and I was still alive, so I threw out the package of Hormel.

I want to let you all know that my biological mother was a horrible cook. The fish she made even our two cats wouldn't eat it. She burned hotdogs COOKED IN WATER. My first good meal from her was in 5th grade—she gave me lunch money to buy food from the school cafeteria. So when I tell you that this product is not edible, I mean it.

I have tried numerous precooked meals like this, but I have never thrown out the food before. Instead I would rinse the food to remove the spices and preservatives and salt, then try using it for a different recipe. I mean an animal died for my nourishment; I do not waste food—until now...

I was actually afraid of getting sick from this food and going to the hospital back then, could have been a death sentence due to Covid.

Now I am used to 5-star restaurants and have eaten food from a 1/2-star cooking mother, but this product is the first time I am putting zero stars.

There is a point where you cannot tell if an aftertaste is Botulism or if there are so many preservatives and other add-ons that altered the flavor, but the risk outweighs the benefits. Not to mention even without the chemical aftertaste—even disregarding the texture—the flavor was horrible!

The only thing I could imagine this to be used for is like the Xmas ugly tie or the ugly sweater. Heck, plz re-gift that Xmas fruitcake to me before you get me this.

I'm glad you didn't get sick, Michael! Do you have a favorite outdoor food brand you would recommend to others?

p.s. I updated your review to 0 stars for you.

Ironic that you asked me that today as after having a product that I gave a bad review to I wanted to review a product that I rated highly...Most of the instant backpacking pastas and rice have the seasoning already mixed with the food and the sodium content is through the roof. I am about to post soon my review of Mr Noddles curry flavored pasta in a cup. Not only is it a fraction of the salt content but every spice and season and oil are incased in plastic giving the individual opportunity to add as much of or as little of the ingredients they want. lol an di used the lightweight but very durable cup it comes in as a drinking cup for the rest of the trip

oh ty for that Alicia... There is a point where a manufacturer tries to fulfil their goal of creating an instant ready to eat product but the preserving aspect so alters the flavor and makes the food unhealthy due to all the chemical preservatives...Some of the Knorr pastas are not overly salty, but probably some of the best products out there both taste and sodium- wise i find in the Ethnic/International isle. Most of their names i cannot list due to being in a different language using a different alphabet then ours. These products tend to also be much cheaper then the American versions of them. Oh and a shout out to Hormel--- There are a lot of your products that i would rate 4-5 stars-- just not this one

The Best Food and Drink

Trailspace's community of gear reviewers has field-tested and rated the top food and drink.