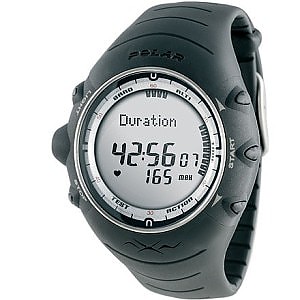 I used the AXN300, which was a load of rubbish. I wouldn't trust Polar ever again. My watch was repaired four times and constantly let me down and cost me a lot of money to own and maintain.

The manual says I can replace the batteries, but Polar declined all responsibility. The repair facility in France is a rip-off, charging over 20€ plus battery to change a battery which doesn't last very long. The watch is massive and snags on clothing and sleeves.

I apologise for my review being so negative. The watch is attractive if you like large chunky black stuff on your wrist that snags on clothing.

There is a host of features that appear impressive, but if a watch is unreliable and prone to frequent breakdowns, it's quite pointless. If you are stuck in a remote and inhospitable country there is no hope to have the item repaired short of sending it back to Finland.

In the end I rejected the offer to pay even more money to Polar and so the French repair facility presumably binned it, which is what, with hindsight, I should have done years ago and bought more sensibly. I never even showered with it; it was never subjected to shocks of any sort or ever exposed to extreme humidity or moisture.

My first AXN300 went wrong two months after I bought it. This was replaced by the dealer who sold it. After that, it was  steady and depressing loss of euros and credibility in what I thought was a company that manufactured quality materiel.

I'll never buy another Polar product again. However the strap was quite good, and perhaps I should have asked Polar France to return my defunct watch so that my German Shepherd dog could wear it and look butch.