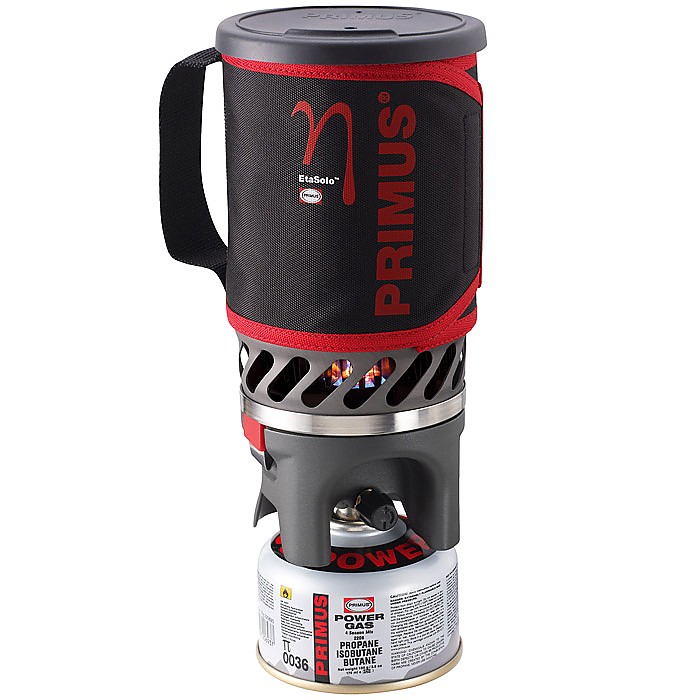 The Primus EtaSolo is the latest in a long line of highly fuel-efficient integrated camp stoves from Primus that make boiling water and cooking food fast and easy.

It cranks out 5120 BTUs per hour but at 13.9 ounces, it’s the perfect size for schlepping around in a backpack (I schlepped it in a daypack on a hike to Eagle Mountain on Minnesota’s North Shore). It comes with a 0.9 liter pot that has a removable wrap-around heat resistant cover and handle and a lid with an opening that is designed to sip hot beverages from. It also comes with its own stand and suspension kit for hanging. I think this is a nice add-on, but the only situation where I could see hanging this stove is when you’re tent-bound.

Note: This could be the demons from my past talking, but I would never use a stove inside a tent no matter how hard the winds blew or the rain came down in sheets.

First the similarities. Both have an insulated mug that is connected to a heat exchanger that is attached to the stove. Both are compact and easy to use and lightweight to stash in your pack. Both bring water to a rapid boil fast and both work great in windy conditions.

Now the differences. The JetBoil does in fact boil water faster—but we’re talking like 10 to 15 seconds, not minutes. The showdown between my JetBoil and the EtaSolo occurred on my patio when the air temperature was about 45 degrees. The JetBoil boiled two cups of water in about one minute, twenty seconds; the Primus boiled water in about one minute, thirty-two seconds.

What I like about the EtaSolo, over the JetBoil, though, is its versatility. It comes with a set of three metal supports so that you can use different sized pots if you find yourself cooking for more than just you (these supports fit inside the mug). A heat reflector plate sits on top of the stove to generate greater heat for non-mug cooking. I experimented using my Primus PowerPot and it heated two cans of chili with no problems and no delays. You will need to make sure that you set the stove up on a flat and stable surface though.

I also like how the mug clips into the stove, as this feature is clearly more secure than the twist-off design of the JetBoil, which, if you’re not careful, you can scald yourself. The downside is that you have to make sure the mug is empty before dismantling or you will get scalded. 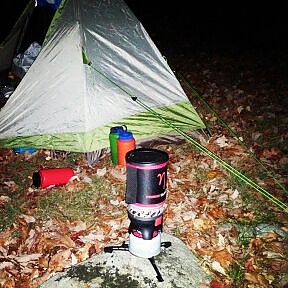 Have used for solo backpacking trips. Example: two-day trip into Harriman State Park in N.Y. Boiled water to rehydrate two entrees, one breakfast, four cups of coffee, and boiled water to fill a bowl and sponge bathe with twice. The above used about a third of the small fuel canister.

Attach canister with fuel knob closed, open the valve slightly and light. Attach pot and adjust flame. The two rubber release clips need to be pinched tightly to release pot; make sure flame is out and you have a good hold of the pot handle. Obviously having the pot lid securely attached prior to heating is going to make the whole process much safer.

Buy this instead of the JetBoil! It does everything JetBoil does plus you can use it with other pans, making it more useful and at the same or less cost. Leave the gas bottle screwed into the burner unit and slide the whole thing into the insulated pot. Has a tripod stand to stabilize while using.

The EtaSolo was simple to set up.  Easy start with the built-in igniter and then adjust the gas volume to your cooking needs. Boils water at a fraction of the time of a simple open stove, saving gas while on the trail.

I want to state up front that I DO NOT OWN THIS PRODUCT. I examined one at my local Gander Mountain that they had on display.

I noticed a problem with the clip mechanism. The heat reflector disc was too small. One side of it would fall off the ledge it was supposed to sit on and would block the clip on that side and prevent you from removing the pot unless you turned it upside down. Without the disc the clips worked perfectly in the upright position. The unit did not appear to be bent or damaged in any way.

Other than this it appeared to be comparable to the Jetboil PCS I own. This may have been corrected since this unit was made.  I believe you could cut slightly larger notches in the reflector and solve the problem.

As I said earlier I DO NOT OWN THIS PRODUCT, but I did think this was a flaw worth mentioning and that you should check for in a unit you were purchasing.