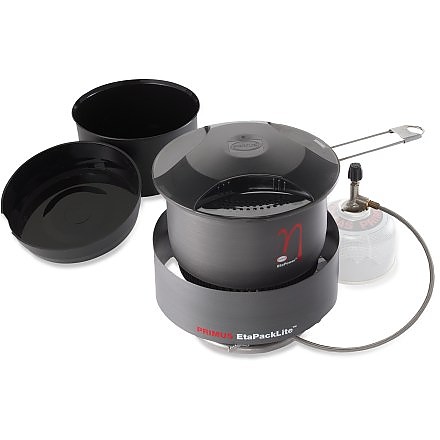 Worked quite well for two dads and three daughters on a two-night backpacking trip. Mainly used for boiling water but also for heating up some pre-packaged foods because the girls didn't like the freeze-dried food we brought. Boils water very fast with wind screen and heat defuser.

Even though the other dad brought a stove too, we ended up not using it. We could boil water so fast with this one that we didn't really need to set up the other one. It is easy to set up and it is wide enough that the unit is pretty stable with a 1.5L pot full of water. Heat adjustment is easy and you're able to take the temperature down to a simmer reliably.  I think we ended up going through one medium sized canister because we were using the stove to sterilize the stream water before consuming it, saving the batteries on our Steripen.

My only real complaint is that the piezo igniter doesn't always work so be sure to bring backup matches or lighter.  Also, the full kit is a bit large but since the burner fits into the 1.5L pot and you can also put in a small fuel canister, it's really not that bad.

We plan to do a lot more backpacking this year so I'll see how well it holds up after extensive use.

Heats very fast, light weight, compact, well made, but spend some time to learn how to cook with it.

I cannot add much to the first review except today I tried to reheat chili. It heated so fast that it began to burn in the center before the entire pot of chili was hot. On the second pot I started off as low as possible and it worked fine.

This stove kit is a racehorse that excels at heating water for soup and noodles, but take your time heating thicker meals like chili. Overall, it is excellent once you learn to control it.

I bought the EtaPower EF three years ago, but it is a bit big for one person. So, when I saw the EtaPackLite I knew I had to buy it. I have no regrets on that decision. It boils water almost as fast as its bigger brother, is big enough to do some cooking on the trail and is really efficient, making a canister last a lot longer than others stoves I've owned (except for the EtaPower). Being a remote canister type stove it is also very stable.

I used the stove for a five week hike in 2009, and a 450g canister was more than enough for making hot drinks, warm lunches and dinners and even heating my tent now and then. The pot is 1.2 liters so making rather large portions of pasta or soup is an easy task. Maybe even enough for two.

It has no problem simmering, almost down to a level where you're not sure if the stove is lit or not. It has a 1 liter graded plastic bowl to protect the non-stick coating on the inside of the pot from the burner and wind screen when packed, and since it's made from food grade materials it can be used as a regular bowl.

The weight of the stove might be a bit higher than other solo/two-person stove sets, but you'll save that on fuel on longer hikes. If you want to save weight leave the bowl, cap and wind screen at home. Use some bubble wrap to protect the inside of the pot, and a lightweight stuff sack to protect your pack.

Unlike its bigger brother the EtaPackLite does not have a lid that can be used as a frying pan. The upside to this is that the stove is lighter, and you can bring along a proper frying pan if you need it. I have made bacon and scrambled eggs in the pot though, so it's possible to fry in it. The wind screen has to be removed if used with a separate frying pan. You can also use other pots on the stove, just remove the wind screen if necessary.

I won't give it a five star rating because of the following minor problems:

1) The wind screen is not flexible enough and tends to scratch the inside of the bowl when packed.

2) I had to replace the rivets that the legs pivots on with screws and nuts as they got way to loose after +/-100 days on the trail. I put this in the wear-and-tear-category, but if Primus had used screws instead of rivets in the first place it wouldn't be an issue. 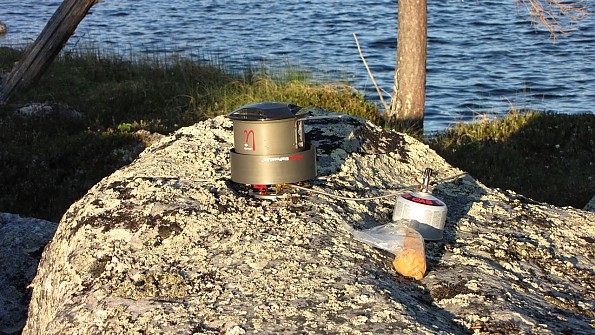