The Scout has been discontinued. If you're looking for something new, check out the best headlamps for 2020. 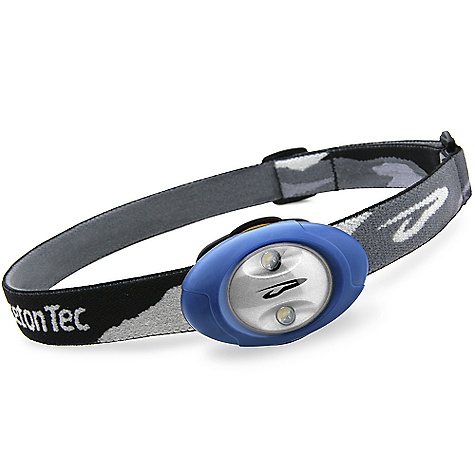 The Scout is THE best tiny headlamp I've found for features, weight, and price. It's now my only summer backpacking headlamp. My former headlamp was a twist-on switch Cyclops. OK, but only one lighting mode.

The Scout has many nice features from high water resistance to many modes to clever switch protector when stored to mountability on hats.

Still, a single, brighter Cree bulb would have been nice. Maybe in another iteration...

This is a pretty decent light and weighs only a couple of ounces so it is great for ultralight backpacking and it is also small enough to fit in shirt or pant pocket. My only complaint is that the button you push to turn it on and off is too small and difficult to operate with gloves on. But couldn't beat the price though.

Bought two of the lights, one for me and one for my bride. I like that the lights are very light (Is that a pun?) but after using them for a while, I decided that I didn’t like the coin cell batteries so much. Light output was about what you would expect from the two LEDs, not very much. Bought a couple of Princeton Tec Auroras as their replacements so I could use rechargeable NiMH batteries.

It was an ok headlamp. Replaced the batteries twice, then gave up on it. It's not quite bright enough for me personally. It's a small lamp, good for emergencies, but if that's what you are looking for get the Petzl E Lite. It's smaller, lighter, and batteries last longer. Batteries for the Scout were kinda hard to come by, and they didn't stay bright for long after the replacement.

I really like this light for a couple of specific uses. It is great for reading on the low setting while in a tent or I even use it for that at home when I don't want to wake the wife. I also use it on low while flying as it isn't so bright as to upset my night vision. It's perfect for that.

As with the other reviewers, I had that clip break, but, when I contacted Princeton Tec, they mailed me a new clip free of charge and it arrived quickly. My customer care experience was very good. I would suggest others re-contact the company and I would bet they get a new clip ASAP. Hopefully P-T has redesigned that piece to be more sturdy now. Otherwise, I really like this headlamp.

I've had two so far. The first one worked fine for about a year, then I gave it away. Got another one and like the previous reviewer, had that biatch break off at the hinge. Fortunately, my back-up emergency pocket maglite saved the day.

The only plus is the weight, which is negligible.

Worked well for a while then the hat clip snapped and the product was no longer usable. Unfortunately when I contacted Princeton Tec they promised to send me a new one which I never recieved. It's been a year now. Looks like they lost a customer.