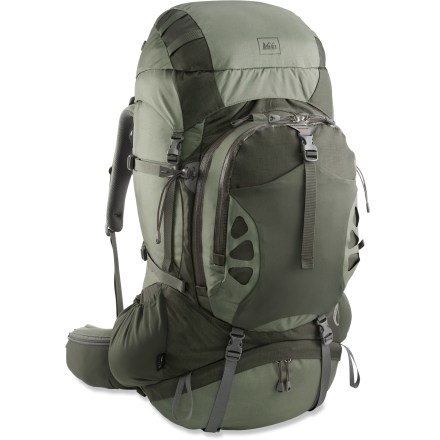 Disclaimer: I work for REI as a very part-time sales person. But I've been a member for a long time and have had quite a few packs from other manufacturers. I'm not at all in love with everything that carries the REI brand.

When this pack was about to be released we employees were offered an amazing deal to buy one, sight unseen. I didn't trust that it'd be something I'd want so I didn't order one. My mistake.

After the pack arrived I began to look closely at it and saw the features relative to the price (and warranty). It's not ultralight, but it is lighter than it first appears that it might be. In exchange for the midweight range you get very adjustable suspension, good padding and support, solid zippers, and a host of features not often seen on a pack in this price range.

The top lid can be opened in any position without spilling its contents due to two well-placed zippers.  It does not have the hip strap that let's it be used as a fanny pack, but as it turns out the vast majority of people never use that feature anyway.

There's an elastic stuff pocket at the very back of the pack that lets me keep handy a hat, gloves, map, whatever. Built into this pocket, at both sides, are laser-cut openings that provide strong attachment points for carabiners or other fasteners.

Behind that pocket is a good-sized larger zip pocket, then above and behind that are two zippers that allow access to the main compartment. These two zippers are separated by a strip at the top that prevents the entire panel from dropping down so that the contents of the main compartment cannot spill out. (I like this feature. I've seen a few who wish that it was a full-U-shaped zipper.)

There is a sleeping bag compartment at the bottom with a removable floor/ceiling between it and the main compartment. All zippers are water sealed and the fabric, is in most packs, is water repellent.  There are straps that allow space to attach gear (tent, sleeping pad, whatever) to the lower rear or the bottom of the pack, or both. There are two side straps on each side and well as multiple attachment points on the pack.

The water bottle pockets at the sides are designed to let a liter bottle be locked in sideways in the pockets to prevent losing a bottle. The pack is hydration unit compatible. There are two zipper pockets on the front/sides of the hip belt.

The pack comes in 3 sizes, but can be micro-adjusted for torso length by releasing and reattaching some really grippy Velcro.  Use gloves or a tool to separate this stuff. If you have hips that are smaller or larger than the standard for your torso length REI will, at no charge, switch out the hip belt for you. Again, this is an easy switch to to do because of the modular design.

The suspension has good airflow between your back and the pack, but without the bowing-out that places pack weight far from your back. The frame uses a stiff frame sheet but the main support comes from a lightweight, aircraft aluminum, U-shaped frame that the pack stretches across. A medium size pack weighs 4 lb. 13 oz. / 2.18 kilos. The regular price is $239.

I've used this pack for snow camping, and for week-long trips, including in the Canadian Rockies during lousy weather. That's to say that it's pretty easy to carry quite a lot, with comfort, with the Crestrail.

Very nice pack for the price, good adjustment on the internal frame.

This a very nice pack. It has logged some miles. I like the adjustments the pack has and ability to enter the pack on either side without having to pull all top loaded items. Has a nice cool fit on the back.

Great overall backpack. I love how it looks and how it has performed on 20+ mi trips.

This product fits well! So many compression straps and even an adjustable torso and back plate. Very comfortable.

It's in the middle between lightweight and comfort. I feel it's just enough of both to be almost perfect. This bag has so much room and everything is so easy to reach with all the zippers. It was a little much for me at first. My previous bag was much less complex, but once I figured it out I loved it.

I got this bag used and with so many miles on it, yet everything is still in working condition, very durable product. I have taken this bag with me on a couple overnight backpacking trips of 20+ miles and it's served me well so far.