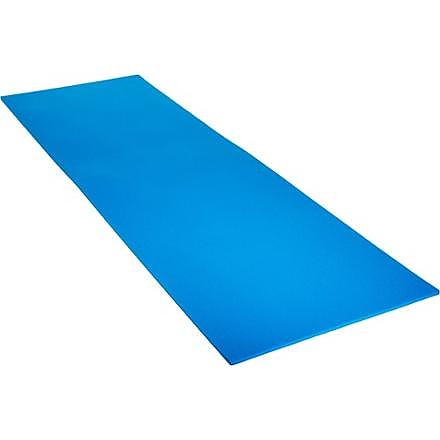 The REI Standard Blue Foam Pad is the same as the Ensolite Sleeping Pad.

The Standard Blue Foam Pad is also sold as the Ensolite Sleeping Pad.

Better than the ground.
Competitive weight.
Does add some insulation.
Should go great combined with another pad for winter use.

So, to start off with, I do have, and have used the basic Thermarest self inflating pad in 3/4 length. But not being particularly plump, I tend to bottom-out at the pressure points (hips, elbows, etc.) with any type of air mattress. I'm also constantly afraid of getting a hole in it, though it hasn't happened yet.

So for my last backpacking trip I had ordered the Thermarest Z-Lite SOL... but it didn't arrive in time.

So after a quick dash to the local REI we picked-up a pair of these pads for the trip.

(Yes, they could probably be found cheaper at Walmart, but I'd rather spend more at REI... Besides, the dividend will help reduce any price disparity.)

After a 3-day backpacking trip I can safely say that these are... not that great. I won't however rate these any lower than 3 Stars (Average) because so many people have used these in the past, and they have been around for so long, that they really are basis for all other comparisons.

I did still bottom-out at the pressure points with this pad, but honestly I have slept worse than on this outdoors.

I also don't look at this as money lost in any way, because they can be doubled-up with another pad for either car camping, or snow backpacking when extra ground insulation is needed.

It's also cheap enough that you wouldn't feel bad cutting it down to a custom size if you had a specific need in mind.

You also won't feel bad for taking little chunks out of it when you rest your pack on a log during a short break. You can always repair the spot with a piece of duck tape.

At around 12 ounces for the full size, it is competitive with the higher end foam offerings from Thermarest.

Bottom line: You don't need more, and unless you can afford something nicer don't hesitate to get one.

If you can afford something nicer spend the extra money.

Either way the money is not lost since it can be double-upped later, or repurposed in the future.

Repurposed? Cut a piece small enough to fit in a stuff sack. Now you have a sit pad, a kneel pad, and extra form for your stuff-sack pillow.

If I were leaving tomorrow on another trip with nothing else to choose from, I'd grab it and go and not give it a second thought. But seeing as I have that 3/4 self inflating, I'd grab both and sleep cushy.

(Kind of a so-so review? Well it's purely a reflection of this pad; it's not great, but it doesn't totally suck, either...)

Who hasn't slept on the old blue pad? These are like oatmeal and matches- part of backpacking that will never leave. Thanks for the review. 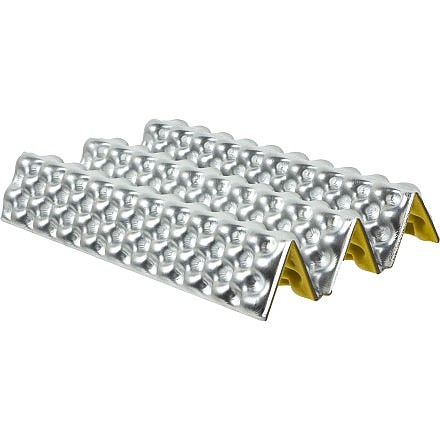