The VE 24 has been discontinued. If you're looking for something new, check out the best four-season tents for 2020. 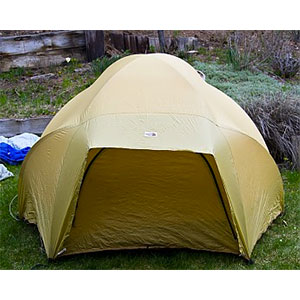 GREAT TENT! Have one of the first ones from the '60s or early '70s—I can't recall. It survived a 200' flight in a windstorm with stuff in it. Busted a pole, but that was it. Urethane starting to break down—starting to smell like cheese or old socks, but still bomb-proof.

It's been: rained on, blown away, frozen, cooked in the desert.

For two people it's ideal with plenty of room for cold weather gear.

Pitches fine, just remember to stake it down well BC it flies real good too. Haven't been rained on a lot, but what rain it's seen has been handled just fine—no leaks or "surprises."

Mostly used in the deserts, so the biggest condensation problem is winter-time ice.

Packability is better than normal, I think, for a four-season tent, but not having owned another one for around six decades, my judgement is limited to observations on how other friends' tents compare in use.

Other than the 'cheesy' pong given off by the aging urethane coating the whole shebang has held up remarkably well: better than I have. Everything still works—zippers, bug netting, etc.

My weirdest experience with it was to use it as a shelter, while caving, in order to escape an army of blood-hungry: Cone-Nosed Kissing Bugs. All in 90-degree humid, summer weather near Lampazos de Naranjo in N.L. Mexico. They were tracking us somehow from downwind and our only refuge at night was inside my VE-24. In the morning, we found hundreds of them, hanging like Christmas ornaments all over the tent. But nary a one inside. These babies carry Chagas Disease, so this was not a trivial concern.

Source: Bought it new, as a sales demo sample.

Welcome to Trailspace, James! Thanks for the review of your well used VE-24. It's great to hear about gear that has held up so well. If you have any pictures of your tent in use, those would be nice to see in your review.

I purchased my VE24 tent in 1978 just before we travelled across Canada on our bikes then onward to England, Europe and the Middle East. I lived in my VE24 on by the gulf of Aqaba for two months surviving sand storms.

I still have my VE24 today and continued to use it successfully under adverse conditions. The continuation of the VE series tents speaks to excellent quality and commitment by North Face to produce equipment truly tested. I will definitely purchase another.

Survived the test of time.

I purchased my tent in the late '70s and used it in all conditions—backpacking, car camping, and many cross-country and cross-state motorcycle trips. My kids occasionally use it nowadays.

I was just asked to accompany a friend on a motorcycle trip around Nevada, Utah, and Arizona. Out comes the VE-24. I think some of the smartest decisions I've ever made was to buy quality and the VE-24 is pure quality. Oh yeah I'll bring along that Swiss Army knife from the late '70s.

Welcome to Trailspace, Edmund. Are you still using this tent? I'd love to see some pictures of it.

I picked up my VE-24 in the early 1980's and still have and use it today and couldn't agree with you more on how great a tent it is. I still even have the two foam spacers that snap on the outside of the tent to help keep the fly off of the main tent!

Welcome to Trailspace, Edmund! I love to hear about gear that is still being used after decades. I'd also love to see some pictures of your VE 24 in your review. Enjoy your upcoming trip!

Purchased '80 or '81, used backpacking, canoeing rivers, conducting training schools in survival, winter hiking Mt. Mitchell, minus 20 below temps. All this it never failed. Also used in wilderness hunting, all over East Coast states. This tent is as trustworthy as my Smith & Wesson 686 Revolver.

Set up with ease, very stable, never leaked in 35 years use. Plenty inside room. Could not have designed a better shelter. Looks great, like new, today.

Welcome to Trailspace, Floyd. I'd love to see some pictures of your VE 24 tent, if you're willing to share some in your review. It sounds like it has had plenty of adventures so far.

It really stinks that North Face made such a good tent. I've been looking for all kinds of reasons to replace it, but I really can't justify replacing a perfectly good tent.

You would wonder why on earth one would keep a tent for 30 years plus...well it's truly made to last! It has survived two marriages, one kid, and three dogs. It doesn't leak, it withstands high winds, all kinds of snow, and it outperforms everything that's out there.

Excellent for backpacking or car camping. After many years of use the fly had some delamination, I sent it back to North Face and they replaced the fly with a VE 25 fly, which I guess had just come out. So if I could justify a new tent I'd just suck it up and get the VE 25.

At my age I'll have to leave it in my will, because it most certainly will outlive me.

Source: bought it new
Price Paid: I think in the $350 range

These older NF VE tents are brutal beasts. The newer models, as I have reconditioned two, are not made with the same quality.

Just picked up a smelly VE24 today. No poles, but I have plenty of parts poles to make a set. Needs some patching to the pole sleeves, some floor sealer, and she's ready for another 10 years.

I have the first of the original VE25's and it's my go-to tent 85 percent of the time when I motorcycle or winter camp. Can't stand up in it, but plenty of headroom for sitting in a camp chair.

None in this tent so far, but no doubt it will be like my older VE25 without the snow holes.

This is a great tent that easy fits two people, and fits three when using the vestibule. But I need to find replacement poles for it. They got all bent up and North Face does not make them anymore. Is there a company out there that makes custom tent poles?

Welcome to Trailspace, Eric! I'd love to see some pictures of your TNF tent, if you're willing to share some in your review. As for poles, there are companies that make replacement poles. I have no personal experience with them, but here is one that has been mentioned by other Trailspace members: https://tentpoletechnologies.com

Also, you may get some suggestions in our Gear Repair forum: https://www.trailspace.com/forums/gear-repair/ Good luck!

Bought ours at the North Face factory store in Berkeley, CA, as a second, great discount! Problem was that one of the low side wall panels was turned inside out, big deal, I'll take the discount!

Agreed with all the reviewers, awesome tent.

My con is how heavy it is! Compared to today's tents, it is a barge, but then again those other lightweight tents are timed for destruction, will not take the wear and beating of the VE24.

Beware of the front door zipper.  It is curved and loooong. Mine has gone out twice so far even though it was kept silicone lubricated nicely, it still blew out and without that much use. Maybe the newer versions have a stronger zipper. Guessing ours to be one of the first produced when ever that was a long time ago. Gotta run the zipper slow and easy!

BTW, historically, if I am thinking right, it was the very first free standing tent ever designed and marketed the rest is history! Can anyone confirm this or set me straight?

Thanks for the review of your VE-24, Michael!

I bought my VE 24 back in 1976. What a quality product. Camped all over California then onto Europe, Australia, and New Zealand.

I recently rediscovered my VE 24 but can't find the poles. Can someone measure a pole for me? I may get lucky and find replacement ones here in NZ. Cheers.

We bought our tent in 1984 in Germany, and it cost us 1,400 German Marks then (about way over $1,000 USD) but it was worth it. NF replaced fly door and floor of tent over the years under warranty. Would like to replace the fly though but cannot find a newer one. Awesome tent!

Welcome to Trailspace, Martina. Do you have any pictures of your VE 24 you could show others in your review?

It's so cool to hear stories about this tent. I think I bought mine in Honolulu in 1976 or so, so that makes it almost 40 years old. It's been in the Cascades, Rockies, the Wasatch, in snow and rain, and still does the job.

After all this time, the elastic in the poles is still hanging in there!  A little looser, like me, but holding the fort together! Zippers still zip. The only flaw is my own fault when I flew it like a kite in the Santa Fe wind, and it got a tear from some thorny bush. But we sewed the screen up, and it's part of the character.

You can replace the elastic in the poles, or if it just loose, shorten it up, to make it snug again.

Welcome to Trailspace, Cata Low! I love to read reviews of people's older gear that's still in use. Got any pics of our VE 24 you could share in your review?

North Face guarantees everything they sell, and they back it up. The BEST QUALITY I HAVE EVER SEEN!!!

I had a North Face Oval Intention winter tent. The floor delaminated. I took it to North Face and they replaced it with a VE-24.

I had two Holubar goose down -10 rated sleeping bags, that lost a bunch of down, the guy told me that North Face took over Holubar. I brought the two bags in and they gave me two NEW bags !!!!! They rock!!!!

More of: the best four-season tents » | The North Face »