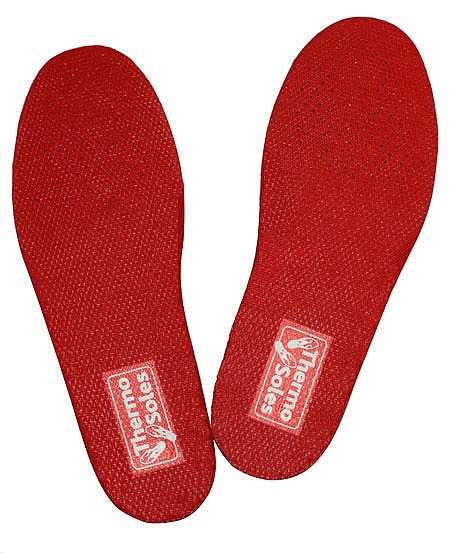 A couple of years ago, I got frostbite in my big toes. Even when wearing -40° boots, I forgot to put in my chemical toe warmers — just one time but enough to turn my toes black.

Not a fun experience, and ever since, I've had to be especially careful about letting my feet get cold. While chemical packs are reliable and cheap, they are also a bit bulky, and I was looking for something that wouldn't take up much space in my boots. I looked at heated insoles, but most of the models I found had an external battery pack with a cable running down from calf to foot. Hard to get at with snow pants on and vulnerable to snagging or breaking.

When I came across these in a catalogue, I had my doubts; some of the online reviews seemed to show a high failure rate, and I wondered about spending $100 on something that might only last a few trips. However, I decided it was worth the risk, and got some last year.

I carefully trimmed them to fit into my boots, and tried them out. Careful, when trimming them — it's possible to cut through the wires. The ThermoSoles are not meant to generate heat continuously, so to conserve battery power they only turn on when needed. The settings won't leave your feet feeling hot, but they won't get cold, either. The switches to turn them on are a bit small, and the protective plug that covers them is hard to seal properly, but that doesn't affect performance. After a while they wear in a bit, and start to conform to your feet. However, that leads to the feeling of a bit of a central ridge underneath the foot. Not noticeable when walking, but a bit odd.

I tried these out on most of my winter snowshoe and hiking trips, when vascular constriction by the bindings can be a real risk, and so far they've worked quite well. Since I'm outside every weekend for at least a day, I can say they've had a good workout. I've noticed that in cold weather the charge doesn't last the 8 hours claimed by the manufacturer (that may be the maximum in a warmer climate), but for a half-day, they work pretty well. Because the ThermoSoles only heat one area under the ball of the foot, I will add a chemical pack on top of my toes if it's really cold, but part of that is because of the increased sensitivity from frostbite.

I was (and still am) a bit concerned about reliability. Just the idea that you're walking on top of a bunch of delicate electronics make me nervous. But so far, after full year of use, I haven't had any problems. I'll still carry chemical packs just in case (and I'll have them along for other people anyway), but I've come to rely on the ThermoSoles.

I started checking out some of the bad reviews and realized that most of them seemed to stem from the same problem. The trick (which may explain some of the failure reports) is to READ THE INSTRUCTIONS! When charging them, both switches have to be 'off' and they have to be charged at the same time.

Further, since they are thermostatically-controlled, turning on only when the temperature drops below a certain point, activating them in a warm house might lead you to think they're not working. The manufacturer suggests turning them on then putting them in the freezer for a while to see if they're working. One comment — they are marketed as being 'Straight from Europe' which is clarified when received as 'German Design (manufactured in China)'.

Over all, I'm glad I got them. I now use the ThermoSoles at temperatures below -10°C, and I haven't had to worry about getting frostbite in my toes again.

I have just bought the ones with control unfortunately. They are not for people with cold feet, so I have wasted my money which is very hard to come by. They do not make my feet any warmer or not so you would be aware of.

Cold feet ruin everything I do and nothing seems to help.

I have said all I need to say. My feet were freezing before and still are.

I wish I had not wasted all that money and would NOT RECOMMEND BUYING THEM.

It breaks my heart to waste money and get no benefit.

Good in theory, bad in practice. I had two sets, both never seemed to work as expected and both sets failed. The Thermo Sole guarantee is 6 MONTHS not 2 years as it suggests on their website.

These heated soles seem great "in theory". However, having owned two sets, both failed, I would not recommend them.

As they are Thermostatically controlled, you do not have complete control of when they heat, i.e. you can use the remote control to switch them on but they may not actually heat as they will only react to body temperature. I found my feet would get exceptionally cold and would not feel any warmth from the soles until it was too late and I was either in considerable discomfort or I was no longer out in the cold conditions.

The first set I owned, the power connector/charging port broke and these were replaced on the Guarantee, the replacement set never really worked properly then failed completely, unfortunately Thermo Soles did not want to know the second time.

Friends/colleagues have also had very similar experiences so proceed with caution if you are going to give them a go regardless of this review... 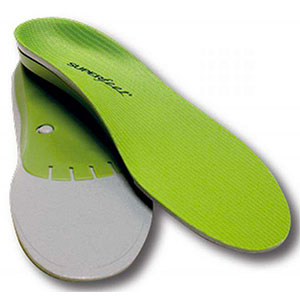 Trailspace's community of gear reviewers has field-tested and rated the top insoles.