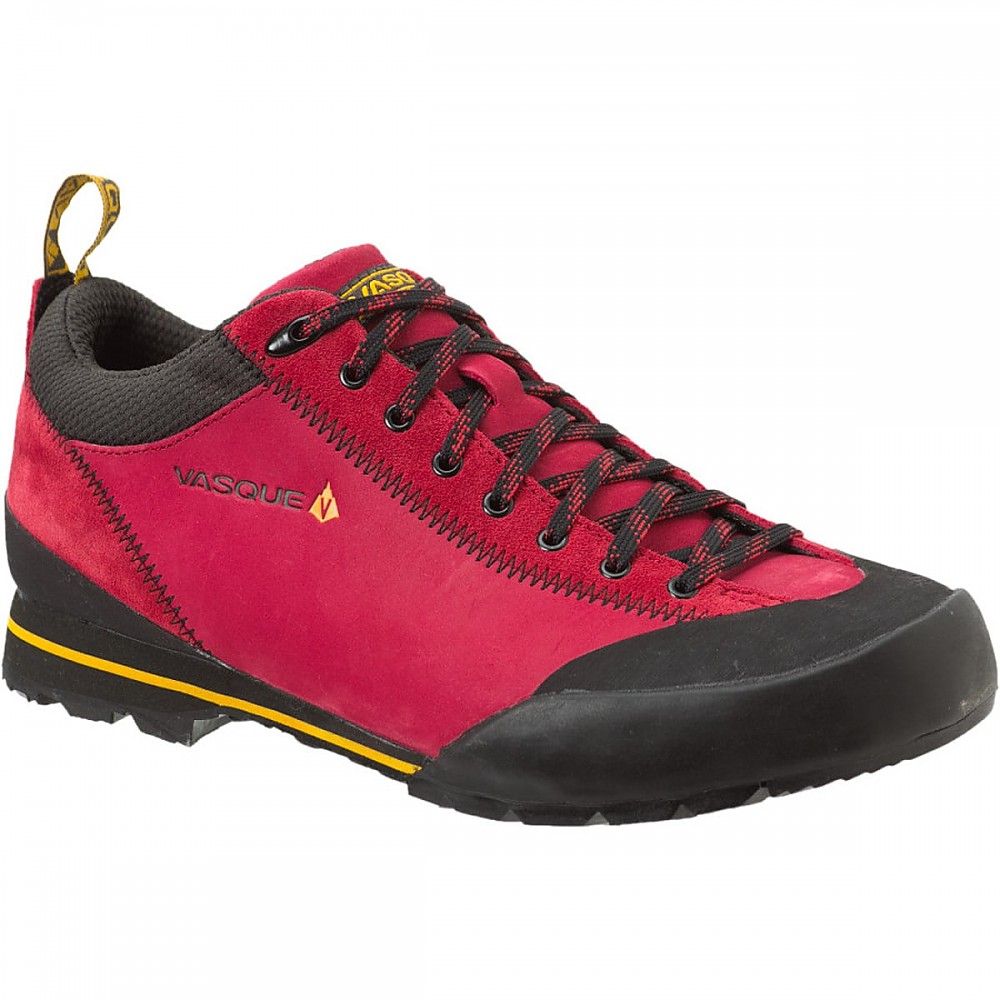 The Vasque Rift is an excellent lightweight approach shoe that is suitable for longer distances. The sturdy construction and grippy sole are key features, as are the minimal design and quality materials. Unfortunately, a lack of gussets allows debris to enter the shoe around the tongue. Overall, this is a great shoe, but gussets and a water resistant or waterproof liner would help significantly.

At the end of 2011, when I started to walk longer distances, I thought about how what I was doing might be "hiking" rather than "walking". I figured that, if I was hiking, then I should probably have hiking boots. I went to REI, where I found a pair of boots that I liked well enough to try on.

The thing about me is, I won't even bother trying something on if I can't stand the sight of it, and most of the hiking boots and shoes made me want to turn around and walk out of the store. I liked the simple design, deep green leather, and sturdy feel of the Zamberlan Trekkers, but at around $275, they were among the most expensive footwear on offer at the store. No one there could really tell me much about whether or not I really needed boots for the kind of walking I was doing, so I left, kind of in love with the Zamberlans but unsure that heavy-duty boots were necessary for me.

A week or two later, I went to Adventure 16, where a nice young man spent over an hour measuring every angle and curve of my feet, showing me four or five models of boots, teaching me lacing techniques, and leading me through the process of determining whether each pair fit me, all despite the fact that I had told him outright that I did not plan on making a purchase that day.

Because I love them, I really wanted a pair of Vasque Sundowners. Made entirely of leather with Gore-Tex lining and a lugged Virbram sole, these boots may be the most iconic, well-designed hiking boot available from an aesthetic standpoint, but they are extremely heavy. I may get a pair someday just to wear around, but I can't imagine walking any real distance in them.

I picked up a few odds and ends and learned that the man ringing up my purchase was preparing to embark on a Pacific Crest Trail thru-hike. I asked him what boots he planned to wear, and he told me that he doesn't wear boots. He would be wearing New Balance running shoes. I instantly felt extremely silly. I was all hung up on expensive, long-wearing hiking boots, and the longest walk I'd ever taken at that point was around ten miles. Here was a man preparing to walk twenty to thirty miles every day for six months, and he was planning to wear a pair of running shoes.

In fact, New Balance running shoes were what I had been wearing on long walks up to that point. A pair of 993s. I liked their looks, their wide toe-box, and their sturdy construction. Plus, they are made in the U.S.A. I began to reconsider my need for boots. Looking around the internet, I quickly learned that most of the lightweight and ultralight hiking enthusiasts I had started following don't wear boots. In fact, there are even a few who wear only sandals or other zero-drop footwear, espousing the joys of "barefoot" walking. I was already wearing a nearly zero-drop shoe for my daily jogs, but I wasn't sure how the ideas around proprioception translated to long distance walking on rugged, varied terrain while carrying a heavy pack.

A few weeks later, REI had one of their famous used gear sales. I'd heard that people line up for hours in advance of the 7am start of the sale, but I stayed out late the night before and didn't make it to the queue until 6:45. I stood there in the light rain watching giddy customers walk down the sidewalk past me, laden with bags filled with sleeping bags, camp stoves, backpacks, trekking poles... I figured that, if I even made it inside, there would nothing more than a few mismatched socks, bulky hand-pump water purifiers, and outdated frame packs left to sift through.

By some stroke of luck, I was the last person allowed inside. The ground floor was, indeed, a disappointment, but I went upstairs and there, sitting among a million pairs of gross hiking boots were a pair of Zamberlan Trekkers. In my size, barely worn, for forty-five dollars. $45! Next to them was a pair of Lowa Albula trekking boots, another model of tremendously overbuilt but nicely designed boots I'd had my eye on. They were also my size, barely worn, and $45. I bought both. At $90, I'd just bought two pairs of very good boots that would have cost me nearly $600 to buy at full price.

It was only 8am, and even though it was still raining, I went straight to Will Rogers State Historic Park and walked up to Chicken Ridge and back in my new (to me) Zamberlans, sure of step on the rocky, muddy path, grinning the whole way.

I wore my Zamberlans on my first walk up Mount Baldy. It was hot, and I got some nasty blisters. The second time I walked on Baldy, I wore my 993s and felt great until I started falling. I fell at least twice on my way down. What I needed was something low and lightweight like the 993s but with a lugged sole like the Trekkers. I had also been looking at rock climbing shoes and approach shoes and started dreaming of a low-top hiking shoe with a super grippy sole. So far, the Vasque Rift is fitting the bill.

These shoes are flexible and well-constructed. They are light enough while also feeling substantial on my feet. They run quite small, so it took a few tries before I found the proper size for my feet. Now that I have the right size and have done a few walks in them, I am convinced that this style will go a long way for me.

The laces run much farther down the front than on most shoes, like a climbing shoe. This feature allows me to wear a variety of socks: I can tighten the laces around the toe box when wearing a thin sock and loosen them when I want a thicker sock. The whole top of the shoe extends a little farther up the front of the foot than many shoes, so I can leave one or two of the topmost eyelets unlaced if I want a more flexible fit around my ankle.

I have two complaints: they are not waterproof, and the tongue is not attached to the main body of the shoe. This means that lots of dust and little rocks get inside the shoe. The second time out in these, I even wore desert gaiters (I was in Joshua Tree, so it wasn't entirely inappropriate... ), but I still ended the day with all kinds of little rubble inside there with my feet. On the other hand, I was able to walk up and down the sides of rocks at silly angles and skip down crumbling hillsides without doubting my steps. The grip of these soles is better than any of my other shoes.

These shoes are close to perfect, but a Gore-Tex lining and gussets would seal the deal.