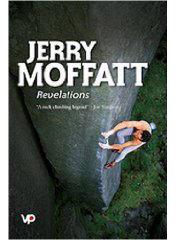 Living standards for dedicated rock climbers in 1980s England were grim by any measure, but Jerry Moffatt doesn’t shrink from describing just how grim it was. In his new autobiography, Revelations, he talks about the dole, subsisting for months on beans and tea, camping out in caves, in shacks, and under flimsy tarps at crag sites throughout the United Kingdom. It’s all in service to the relentless training he undertook to become one of the best climbers and boulderers of his generation. Revelations, written by Moffatt together with Niall Grimes, has won the Grand Prize at the 2009 Banff Mountain Book Festival, one of the biggest prizes in publishing in the outdoor, adventure, and environment genres.

“There’s none of the familiar ice-gripped heroics we’ve become inured to in climbing books,” says Book Festival jury member Stephen Goodwin, editor of The Alpine Journal. “Instead of dark introspection, the diversions from the actual climbing are bikes, dossing, travel, having fun, and becoming a business man (a founder of Sheffield’s The Foundry climbing wall). Moffatt has done climbing history a service in setting down the story of U.K. climbing in the “dole era’ of the 1980s — a story that was quickly becoming forgotten.” Moffatt wins the $2,000 Phyllis and Don Munday Award, sponsored by the Alberta Sections of The Alpine Club of Canada. It was among 31 finalists in five categories

The Jon Whyte Award for Mountain Literature, sponsored by the Whyte Museum of the Canadian Rockies, was awarded to mountaineer Steve House for Beyond the Mountain. House gets past the cliché of the gripping alpine chronicle, the description of the expedition, the story of near-survival, to examine the effect that extreme pursuits have on the pursuer. Jury member Jon Popowich, a contributing writer for Gripped magazine, describes House’s exploration of “the gaping inner voids that emerge in the wake of intense experiences and achievement, the desires for new and more ambitious goals to fill the spaces, and the difficult longing for partnerships of connection, synergy, and shared meaning.”

Winning the James Monroe Thorington Award for Best Book on Mountaineering History, sponsored by the UIAA, David Roberts’s biography of alpinist and high-altitude photographer and cartographer Bradford Washburn is called The Last of His Kind. Goodwin describes this personal, anecdote-filled story as “an exemplar of the biographer’s craft,” which finds new things to say about a life already well-chronicled.

Mountain Exposition
A user-friendly guide to the connections between mountain geology and the climber’s craft takes the award for Best Book on Mountain Exposition, sponsored by Yamnuska Mountain Adventures. Sarah Garlick’s Flakes, Jugs, and Splitters delves into the often-surprising natural science behind popular climbing sites around the world.

Adventure Travel
Norwegian explorer Borge Ousland wins the award for Best Book on Adventure Travel for The Great Polar Journey – In the Footsteps of Nansen. The book follows Ousland’s expedition to retrace the route through Franz Joseph Land to the North Pole, undertaken by legendary explorer Fridtjof Nansen in 1895. Jury member Susan Schwartz, author of Into the Unknown, praises the book’s mix of polar history, heroic exploits, and personal memoir.

Mountain Image
Matevz Lenarcic wins the award for Best Book – Mountain Image for a literally soaring vision in The Alps – A Bird’s Eye View. A Slovenian biologist, mountaineer, aviator, and visionary presents these large-format images of the mountain range, without country or territorial divisions, in an art book that Goodwin describes as “a mountain manifesto, a call to arms,” to preserve the Alps for their culture, beauty, and wildlife.

Groundbreaking climber and entrepreneur Royal Robbins receives a Special Jury Award for volume one of his autobiography To Be Brave – My Life. The book tracks Robbins’s life from juvenile delinquency to his discovery of climbing and its positive effect on his life, and gives readers a unique window into the rarefied world of Yosemite in the 1950s and 60s.

Canadian Rockies Award
A local committee chose Bruce Hunter’s novel In the Bear’s House for the Canadian Rockies Award, sponsored by Deuter. Written by a poet and writing instructor, the book is a coming-of-age story about a deaf boy whose world is opened up when he goes to live with relatives in the Kootenay Plain region of west central Alberta.

Winners will receive their awards Thursday, November 5, as part of the Banff Mountain Book Festival.