My wife and I needed to replace a worn out, inexpensive 3-person tent in our "fleet" that we use for casual camping. Backpacking was not a concern since we have a Sierra Designs 2P backpacker, so we were willing to pick up a heavier option and upsize just a bit to a 4-person for the extra space.

A 3-season tent was a must and a vestibule as well. Cost was of some concern since tents in this category can easily approach $400+. After looking at several makes and models we settled on the Cabela's brand Westwind dome tent for $200.

There were other choices, less expensive, but this seemed to be the best bang for the buck. I have had good luck and been happy with Cabela's branded stuff. It is generally made by a major gear maker and simply branded as private label. Danner and Meindl for boots come to mind.

This tent does not come with a footprint, but Cabela's still carries the footprint from the no longer made Alaskan 4-person dome and it is an acceptable fit for about $30. The floor of the tent is too thin for my liking so the footprint is needed!

The tent comes with a sack with compression straps, some extra material and adhesive, aluminum poles, but steel stakes. I'll be replacing them with something lighter and trying the steel ones this winter. The whole thing weighs about 11 pounds. This is not really a backpacking tent, but acceptable for the car, canoe, boat, etc... and, if need be, I could add it to my large pack in the winter.

Setup of the tent itself was pretty straightforward, but the fly and guidelines took a little more time. With repeated use I'm sure it will speed up a bit. Took about 15 minutes to figure it out and set it up. Most of that was figuring...

The tent is a great design. Sturdy with lots of room for two, just right for three, and snuggly for four. Vestibule is functional and will hold two to three modest backpacks. I'm a tall guy and can carefully crouch into it. Ventilation is great. Getting in and out even with the vestibule is easy and the zippers work well and don't get stuck on the material (a pet peeve of mine). Fly was very wind- and waterproof and was tested on the first night.

Tent packs and fits in the sack well, even after adding the footprint. While trivial to some, I like the subdued colors, so using it for deer camp it won't "glow" in the woods. Something about a bright orange or yellow tent isn't for me...even in the summer.

Overall, after only two uses I like it. It's a little heavy, but could be packed in if needed. It's well made, has plenty of room as a 2- or 3-person 3-season tent. Get a footprint for sure (for the Alaskan 4P). It's a lot of tent for the $$.

I have had a chance to camp with this tent several times this summer and here is my update. The tent is pretty easy to set up once you have done it a couple times. Plenty of room and the vestibule is adequete.

I was not please with the seepage on the rain fly though. We camped on a sandbar on the Wi River and it gets VERY humid at night. Anything left out at night looks like it was rained on in the mornings, though it did not rain and the inside of the rain fly had a noticeable amount of moisture on it. I suppose it could have condensed ON the inside but it did not appear that way.

I am going to hit the fly with a coat of waterproofing. If it does not work, I'll return the tent. No reason a new rain fly should seep. I have changed my rating to 3 stars as a result. 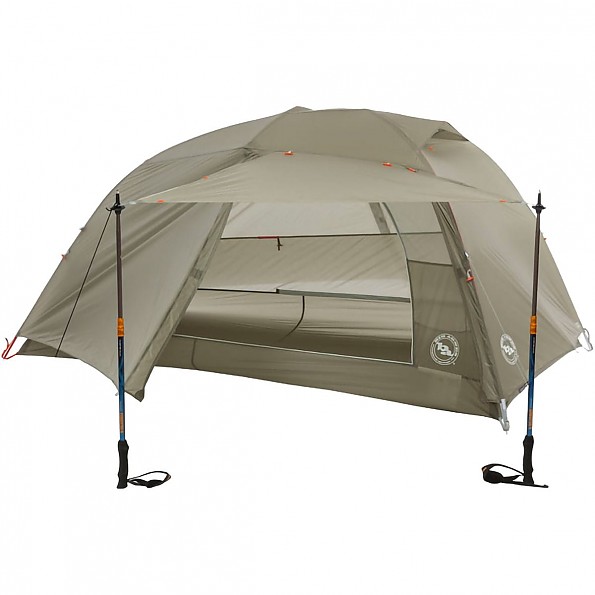